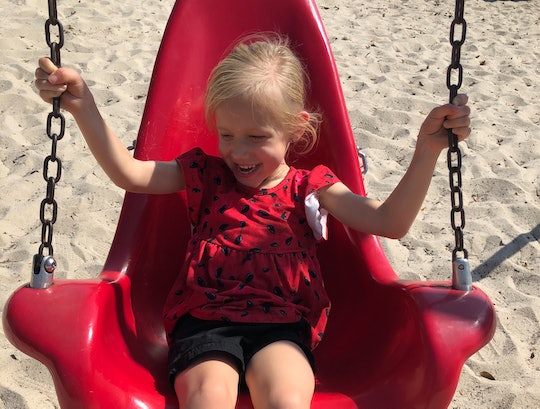 Taking kids to play at the local playground may seem like a rather straightforward parenting activity. However, for parents like Danielle Zukoski, whose daughter Iris uses a walker for mobility, going to play at a playground can be far from an easy endeavor.

Earlier this month Zukoski took her 5-year-old twins Iris and Harmony to a birthday party at a playground at Anderson Snow Park in their new Spring Hill, Florida neighborhood. While they were approaching the playground, Zukoski started filming Iris as she happily navigated the sidewalk toward the playground in her walker. Iris, who has a diagnosis of cerebral palsy with hemiparesis, was able to leave the sidewalk surface and move excitedly across the hard grass toward the play area, but then, suddenly, she hit the sand that covered the entire playground and was stuck in her tracks.

The video of Iris trying to go play went viral on Facebook, was aired on Good Morning America, and has inspired Zukoski to start a Change.org petition to update the playground.

When I watched the video the first time, I was struck by a familiar sinking feeling: As the mom of a child who is not entirely independently mobile, I, too, have seen my daughter assesses a playground, watching as other children move between pieces of equipment with ease, trying to sort out if she can join somehow. I too, have felt the way that my hovering presence alters her ability to explore and connect with other children. I too have had to try to make the best of the one piece of equipment she can actually use.

It was painful to see Iris’s cheerful gait shift to a standstill, in the video. However, at the same time, I felt this sense of relief that Zukoski was able to get people to pay attention to the very real disappointment all too many children feel when faced with a lack of accessible play options.

“The video was just originally meant for [my kid's] dad, because he was working late,” Zukowski explains to Romper by phone. She says it took her a beat to register the look on Iris’s face and understand what was happening as she told her to ‘Go play.’ Zukoski recalled, “I was… watching her through the video as well and she looked back and was just devastated.”

Later, she decided to share the video on Facebook to provide insight in to what they go through daily in trying to access even the simplest of activities. From there, people just kept sharing it and the video went viral.

Iris is a highly social little girl who wants to interact with other children as they move around the playground, rather than waiting for her mother to transport her.

While the response to the video has been overwhelmingly positive, Zukowski tells Romper that a number of people questioned why she didn’t just carry her daughter over to the swing and be done with it. Zukoski says that after she stopped recording, she did pick Iris up and bring her over to play on the accessible swing. However, carrying Iris means that her hands are not free to help Iris’s twin, Harmony, who, while independently mobile without a walker, also has cerebral palsy, as well as a diagnosis of autism. Furthermore, not every child can be carried for such a distance, and not every parent or caregiver is able to do so safely. And, more to the point, this is a solution that does not constitute inclusion or accessibility, which would allow Iris to play as independently as is possible.

As we can see from the video of Iris speeding cheerfully down the sidewalk in her walker, on the right surface, she can really move.

Iris, her mother explains, is a highly social little girl who wants to interact with other children as they move around the playground, rather than wait for her mother to transport her. “[Iris] is 5 years old. She has cerebral palsy, that doesn’t mean that she doesn’t understand things, that she doesn’t have feelings. She wants to be on her own playing with friends,” Zukoski explains. At the end of the day, that’s all she wants for Iris and other children like her — to be able to play independently. “Already we have so many daily challenges, it is just one thing that they should be able to have just to be able to play,” Zukoski says.

After their trip to the playground, Zukoski reached out to Hernando County Parks and Recreation, to ask about the playground. She was told that while other parks in the area meet current Americans with Disabilities Act (ADA) standards for surfaces, the Anderson Snow Park had not been updated since it was built 20 years ago. According to Zukoski, she was to another park in the area that does meet the ADA standards because it has an ADA-compliant mulch surface, rather than sand. However, when Kukoski took her children to play at this playground, they also ran into a problem: The mulch. While it meets the letter of ADA specifications, it doesn’t work for Iris.

Zukoski shared a video with Romper of Iris trying to scoot across the mulch, saying, “She is getting scratches down her leg from the mulch, splinters in her hands… We can do better than this. I’ve seen it.”

She is currently working with the Parks Department to look at solutions for updating Anderson Snow Park in the video into an accessible park where there is something that every child can do, regardless of their needs. “It’s not just about Iris. And it’s not just about her friends that have ability challenges, it is something that all children can do whether they are walking or rolling.”

“Hernando County is committed and obligated to find a workable and affordable solution to Mrs. Zukoski’s concerns,” Harry Johnson, recreation manager at Hernando County Parks and Recreation tells Romper by phone. Upgrading the Anderson Snow Park with mulch be an inexpensive solution to make it ADA compliant, “but that’s not what we want to do because that’s not going to satisfy [Zukoski].” Instead, Johnson says, “We are going to try to move and make this park a first use of a synthetic playground surfacing [in Hernando County].”

Johnson explains to Romper that he has spoken with representatives with several playground vendors about potential playground solutions synthetic ADA-compliant surfaces — which are becoming increasingly popular for accessibility, but are also very costly. As a result he is looking at various paths to fund the upgrade, including combining volunteer efforts, donated equipment, and multiple funding sources in a community-build project. Johnson says, “Nobody, to my knowledge, has said yet ‘hey, we are going to donate a $100,000 playground’ so we’ve got to come up with funding… to do this project.”

In other words, it will not be a quick fix. “We definitely are working on this, it is on Hernado County’s radar. And it is a high priority. But it is also a process. Putting in a playground, regardless of what it is for is every bit of a 6 months to a year process…” say Johnson.

Iris’s story highlights a few important realities about raising children with disabilities. The first is something that is becoming increasingly better understood, if clearly we are still falling well short — that so many things that are made for children are not designed with accessibility in mind. Then, once we identify the accessibility problems, the solutions are so often not simple, fast, or inexpensive — so it requires significant desire and a huge effort on the part of stakeholders to make the changes happen.

Here is where a viral video on Facebook and some media attention, can shine a light on a problem, and push the change forward.

However, to me, the more important lesson here is that we tend to be unaware about what full accessibility actually is. It isn’t just about ADA-approved surfaces. It is about the spirit of inclusion. It is about understanding that accessibility for one child doesn’t look like accessibility for another child. It is about pushing people to look at the reality of a little girl with her wheels caught in the sand or her legs scrapped up by mulch, who doesn’t care whether the surface below her meets ADA standards… she just knows that surface is holding her back from what she’s trying to do. It’s up to her mom to bring people’s attention to the simple fact that “parks are for children, they should be able to play.”

And it’s up to the rest of us to make it happen… for Iris and all the other kids like her who need the world to be a bit better designed to enable them to do just that: play.