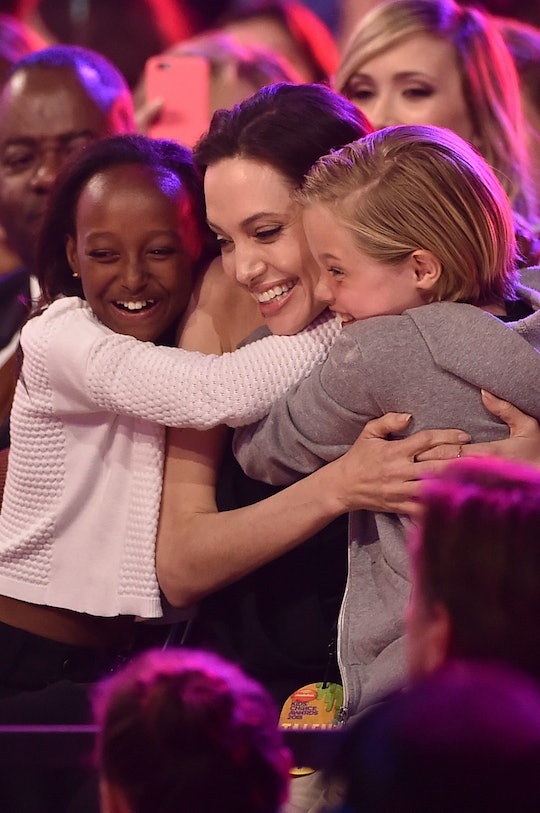 Asking someone to not judge your parenting choices is almost laughable in our society. Asking someone to not judge a celebrity's parenting choices? You're funny. But when the internet collectively exploded after Brangelina's divorce went public, everyone immediately began shaming Angelina Jolie's request for physical custody of the six couple's children. Comments ranged from, "He seems like such an involved dad," to, "I can't believe she would do that to him," to, "She's just jealous and insecure. She's pitting her children against their dad." But here's the thing — I'll give you free reign to talk about the movies celebrities make or the terrible tweets they send out into the world, but I can't stand by and listen to people judge and shame a woman for wanting physical custody of her children in a relationship non of us are privy to.

I have physical custody of my 2-year-old daughter. Her father and I share joint legal custody, and he has her every other weekend. I don't keep our daughter away from him. I don't pit her against him, and I'm not jealous and insecure. The two of us worked together to decide what was best for her. She was only 2 months old when we split, and I was always her primary caregiver. At the time, it made zero sense for the two of us to split the time equally between us, especially because I was open to him seeing her whenever he wanted and up until that point (and also because of her age), I had been the only constant in her life.

But that's my story. And I'm never judged or shamed for it because I'm not a celebrity. I'm not known for making movies, my humanitarian work, or my red-carpet gowns. I'm just a woman doing what's best for my kid.

But that last part is also true of Angelina Jolie.

While I believe that every good parent should have equal responsibility and time with their children, it's still none of my business how Angelina Jolie thinks her children should be raised.

Nobody knows the story between Brad and Angelina. Nobody knows what to make of the allegations of child abuse against Pitt (formal charges have not be brought against the actor and a request for comment by Romper to Pitt's lawyers on the allegations has yet to be returned). Nobody knows the dynamic between the father of six and his children. Nobody knows the intimacy of his relationship with Jolie. Nobody knows if Jolie feels he's incapable of having physical custody of their kids. (She cited "irreconcilable differences" in the divorce papers she filed on September 15, and a statement to the press via her lawyer Robert Offer said that the decision to divorce as for the "health of the family." Jolie has yet to return a request for comment on the divorce made by Romper.) Nobody knows if she thinks his parenting choices would lead to problems. No one knows if Jolie thinks visitation with Pitt is what's right for their children right now and in the future.

To put it plainly: Nobody knows.

While I believe that every good parent should have equal responsibility and time with their children, it's still none of my business how Angelina Jolie thinks her children should be raised. Just because you think Brad Pitt is a good dad, and he very well may be, doesn't mean you get to shame the mother of his children for trying to make the right choice for her children.

Nobody else was in our marriage. Nobody else knew my daughter as well as I did. And everyone knew that I would do what was best for her. Did I allow him to see her whenever he wanted? Yes. I even encouraged it. But her home was always going to be with me.

When my ex-husband and I separated, there was no question — my daughter was staying with me. I would have physical custody of her and my ex would see her every other weekend. It was important to me because I was all she knew. She was only 2 months old, and he hadn't been around much during those first eight weeks of her life. She was breastfed and she was solely dependent on me — I couldn't imagine her living any other way. But even if she had been older, like Angelina's kids, I would've made the same decision. I know I would've been the one creating a home for her, molding her mind, and raising her. If the first two months of her life were any indication of how the rest of my marriage would go, I would've been solo parenting for most of the time. I couldn't imagine splitting her entire life up just so my ex could see her as often as I did, especially when I didn't feel he was putting in as much work when she was with both of us as he should.

But no one argued with me. My ex's own family agreed that I was doing what was best for my daughter. And having that support was so important to me as the mother of my girl. Nobody else was in our marriage. Nobody else knew my daughter as well as I did. And everyone knew that I would do what was best for her. Did I allow him to see her whenever he wanted? Yes. I even encouraged it. But her home was always going to be with me. There was no way I was willing to disrupt her life just to satisfy someone's ego.

In the Berkeley Journal of Gender, Law, and Justice, attorney Dianne Post wrote an argument against joint custody. In her conclusion, she noted that joint custody is not a one-size-fits-all approach for children. Parents have to be motivated, they have to be exceptional co-parents, and they have to be able to get past all of the little things that cause conflict in marriage and divorce. Can it be done? Sure, but parenting has no manual, and it's not up to us to decide the protocol for another set of parents. Especially when all we truly know about them is what the tabloids report.

More Like This
Ginger Zee Had A Perfect Response After A Troll Asked Her "Who's Raising Your Kids?"
It's A Beautiful Day In Jenny Slate’s Neighborhood
This Is What Happens To Your Vagina When You Stop Having Sex
How To Ask Your Partner For Support When You Need It