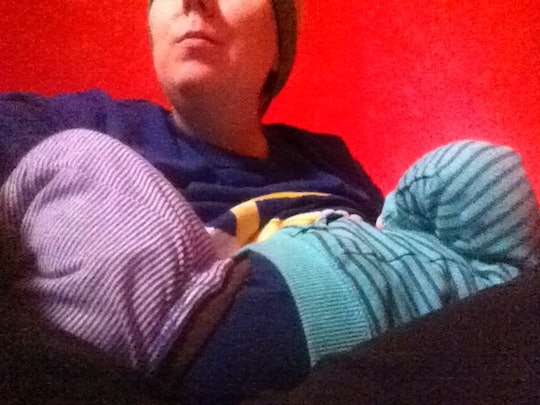 My spouse and I talk a lot about what constitutes "work." People do all different kinds of labor, and we don’t believe that what does (or doesn’t) count as work should ever be defined by whether or not someone will pay for it. The idea that work is defined by wages is part of a capitalist paradigm that I don’t want to subscribe to. With that in mind, I’ve been able to see that housework is work, childcare is work, pregnancy and birth are definitely work, and yes, breastfeeding is work, which is not to say that it’s necessarily unpleasant or that I don't like doing it. I actually happen to love breastfeeding, and I think it’s the coolest. But it's completely undeniable to me that it's a form of labor and as such, it's work that needs and deserves to be recognized that way.

Our family consists of two moms, a delightful little toddler, and three obnoxious cats (yes, we do love them). I happen to be the mom who got pregnant and gave birth, and I’m also the mom who does all the breastfeeding. It’s worth noting that while that’s the way it shakes out for our family, it isn’t the same for all queer families. There are definitely families with two moms in which both moms choose to breastfeed, and there are families in which no one breastfeeds. All of that is totally fine, as long as the baby’s needs are getting met. But in our particular family, breastfeeding is something that I do. It's my job.

I adore breastfeeding, and I’ve actually written about it quite a lot. Breastfeeding is like, an interest of mine.

But it’s also labor, work that I have to do for my family. Do I do it gladly? Most of the time, although I’ll admit to resenting a few late-night feedings and wishing I could have a day off more than once. But just like work isn’t always defined by whether or not you get paid for it, breastfeeding, in my experience, hasn't defined by whether or not I like it. Some people like their jobs, but that doesn’t magically turn it into leisure.

I had to drink water constantly, and I still never felt like I had “caught up.” It seemed like I was suddenly eating twice as much just to avoid getting dizzy. And this was after being pregnant and basically building a whole new little person from scratch.

Breastfeeding is hard. It’s a skill, it’s not something that just magically happens when you put the baby to your boob the first time. Some people have an easier time than others, but most breastfeeding parents really have to work at it. I certainly did. I had to pay attention to my son's latch and positioning, make sure he was comfortable, and ensure that he was getting the milk that he needed. In the early days, none of that came easily. In addition to that, breastfeeding a newborn means essentially being on call around the clock. If that’s not work, I truly don't know what is.

However, this tends not to be the way people think about or even treat breastfeeding. When people see a mother sitting down to breastfeeding her baby, all that effort she puts into it is mostly invisible. For non-breastfeeding people, it's easy to imagine that they're just seeing a peaceful, relaxing, joyful interaction. And sometimes breastfeeding is peaceful relaxing and joyful. But it isn't just that — it's also real physical labor that can be completely depleting. When people don't view breastfeeding as work, they often demand that breastfeeding parents take on even more labor, without even a second thought. In my case, people often have looked at me sideways because of how much work my partner obviously puts into parenting. I think they imagine that I'm somehow being lazy, but they either don't realize or won't acknowledge that I'm actually doing massive amounts of work just to get this child fed.

Breastfeeding also literally means taking resources out of your body and giving them to your baby. It's something I think people who have never breastfed a baby have a hard time wrapping their heads around (before I gave birth to my son and started breastfeeding, I definitely did). All of that milk has to come from somewhere, and the place that it comes from is the parent who is doing the feeding. So while formula feeding certainly also involves work (after all, you have to clean the bottles, mix up the formula, make sure it’s the correct temperature, make sure you’re feeding the correct amounts, etc.), breastfeeding takes it to a whole new level. For breast milk to be as nutritionally dense as it is, it pulls nutrients from the breastfeeding parent’s body.

When I first started breastfeeding, I was totally shocked by how hungry and thirsty I was all the time. I had to drink water constantly, and I still never felt like I had “caught up.” It seemed like I was suddenly eating twice as much just to avoid getting dizzy. And this was after being pregnant and basically building a whole new little person from scratch. But now, that little person was also hungry, and while I was grateful that my body could provide him with nourishing food, it took a lot to keep me going.

In those earliest days when I was so completely depleted from breastfeeding while also recovering from surgery, my attempt to divide up the work of parenting between my wife and I was hard. We joked that I was “boob mom” and she was “diaper mom” because that was really what it felt like a lot of the time.

This week, I’m recovering from a bad head cold, and I’d like nothing more than to sleep all day. That's not possible, because every few hours, my sweet child wants to breastfeed.

These days, we’ve left the newborn stage behind us. Nowadays, the work of breastfeeding is less about learning how to do it, and more about trying to stop my son from doing headstands while he’s feeding. Or worse, stopping him from attempting to just walk off with my boob. This week, I’m recovering from a bad head cold, and I’d like nothing more than to sleep all day. That's not possible, because every few hours, my sweet child wants to breastfeed.

But regardless of which stage you’re in, breastfeeding requires patience, skill, and stamina. Breastfeeding depletes breastfeeding parents of natural resources, and also just frankly takes up a lot of our time. It can be extremely fulfilling and beautiful, and it might be among my favorite jobs I’ve ever had. None of that, however, means it isn’t real work. It might be totally fulfilling and worthwhile work, but breastfeeding is still work. no doubt about it.