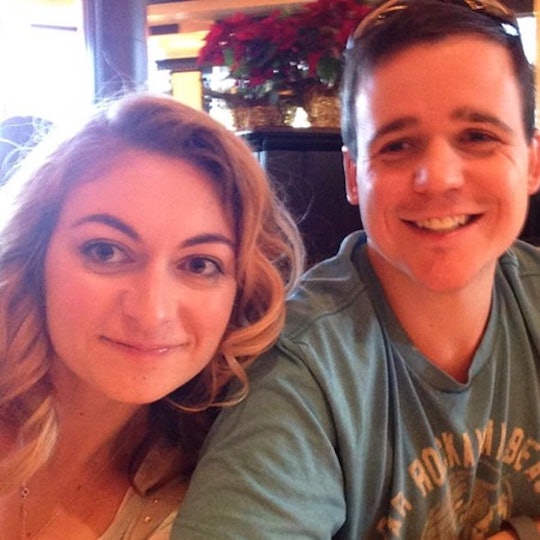 Actually, Co-Sleeping Was Really Bad For My Marriage

Before I gave birth to my twin sons, my partner and I thought a lot about how we would handle different aspects of parenting. I knew I didn't want to breastfeed, that we wanted to try and make our own baby food, and that screen time would be limited. We mostly stuck with those goals — making purees really wasn't that hard for us, but at 3-and-half years old, let's just say my kids speak fluent Nickelodeon. During my pregnancy, we got our sons gender neutral toys and books, started learning baby sign language, and even got ahead of ourselves by reading about different time out techniques. We planned out a lot, but deciding whether or not we wanted to co-sleep was never part of the equation. Yet we found ourselves doing it anyhow, even though it wasn't healthy for our family. In fact, co-sleeping became such a large part of our life that it almost doomed our relationship. It was great for the boys, but co-sleeping almost ruined our relationship.

We started decorating the boys' room the moment I found out I was pregnant — we selected the perfect shade of spring green paint and a dinosaur lamp to go with the style of the room. We even spent a giddy afternoon creating Pinterest-y crayon drip art for their wall that we sappily signed it, "Love, Mommy and Daddy." We assumed our boys would come home from the hospital and move into their brand-new shiny cribs, where they would peacefully sleep from sun down to sun up. Or, in other words, we were naive AF.

Instead of sleeping in their pristine new nursery, my kids spent the first 18 months of their lives sleeping either on the floor of our bedroom in bassinets, in bed next to us, or literally driving a wedge between my partner and me as they snoozed on the bed in a co-sleeping bassinet. My sons were born prematurely. When we brought them home from the NICU, they had to be fed every three hours, even in the middle of the night. With two babies to feed, bottles to warm, and a healing c-section scar that made leaning over their cribs to get them feel like I was being stabbed in the groin by a billion pushpins, nighttime feedings were easier if the boys were in our room instead of down the hall.

I was afraid of smothering the babies with blankets while we slept if they were in our bed, so we improvised with laundry baskets padded with thin blankets until my husband found the energy to drag himself to the store. We bought two co-sleeping bassinets that we kept on the floor in the corner of the room or on the bed between us, and it was brutal. We were always alert for the sound of a waking baby and even when the babies were sound asleep, we didn't want to use our computers or talk to each other for fear that the light or noise would wake them, not that we had the energy to do or say much, anyhow.

Whenever I squeezed the co-sleepers on the bed between us, he'd comment that our kids were literally driving us apart.

We existed on granola bars and old episodes of Lost and never got more than three hours of sleep at a time. When the boys finally managed to hit the 12-pound mark around four months and we no longer had to feed them during the night unless they woke up, we celebrated by putting them to sleep in their cribs for the first time. We had made it, and officially congratulated ourselves on being Good Parents.

But... Spoiler alert: They hated their cribs. Even though they'd started sleeping for longer stretches overnight without the extra feedings, it was clear that the boys had gotten used to being in our room at night, and they were not going to sleep in their cribs without putting up a fight. How to handle the sleeping arrangements became a major source of friction in our typically easy-going relationship.

My partner is a very light sleeper. Whether they were actually in the bed with us or in the corner of our room, every time one of the babies sighed or moved, he'd wake up. He slept better when the boys were in their own room, even if that meant spending an hour or more getting them to go to sleep. If they woke up crying, he even thought it was worth it to get up and soothe one or both sleeping babies for however long it took in the middle of the night rather than let them sleep in our room. My husband missed having one-on-one time with me and being able to cuddle and watch television together, not to mention the sex. Whenever I squeezed the co-sleepers on the bed between us, he'd comment that our kids were literally driving us apart.

Sure, I missed talking and cuddling with my husband, but I was willing to let our relationship take a backseat to our kids' needs, and honestly, sex was the last thing on my mind after having twins.

I, on the other hand, preferred co-sleeping. I'm a deep sleeper and a worrier, so I slept better knowing I was more likely to hear a baby cry if they were in the co-sleeper next to me in bed, even if it meant having to sleep on my side so we'd all fit. (I'm still mad at myself for getting rid of our king-sized mattress when we got married, but in my defense, I never imagined having twins.) Rocking them to the point of drowsiness and then trying to lay them down in their cribs only to have them wake up crying and repeating that process for an hour or so each night felt like a waste of time. When we put them in our bed to fall asleep, they did so quickly and I was able to go to sleep myself that much faster. The same went for when they woke up in the middle of the night — it was 10 times faster to get them to settle back down next to us than in their cribs. Sure, I missed talking and cuddling with my husband, but I was willing to let our relationship take a backseat to our kids' needs, and honestly, sex was the last thing on my mind after having twins.

We formed an uneasy truce neither of us was truly happy with. We'd lay down with the boys in our bed to go to sleep, and once they were out for the count (which took about an hour), we'd try to move them down the hall into their own room. Once they were asleep, we'd shower and have a quick chat and then head to bed ourselves, since we never knew when they would wake up again. Some times they would cry the instant we put them in the crib, and we'd have to wait it out in our bed with them for another hour before trying again. Most nights I dozed next to the boys while waiting for them to fall asleep and my partner sat there silently fuming about the lack of couple time.

We went to sleep with the babies, and every morning we woke up with at least one of them between us.

In order to get more sleep in the middle of the night and to try and prevent one baby from waking his brother, when they woke up we just brought them into our bed and let them stay. We went to sleep with the babies, and every morning we woke up with at least one of them between us. To his credit, my partner tried to come up with solutions to get the boys to sleep on their own in their room. He left their sheets in our bed overnight and then made their cribs, hoping our scent would trick them into thinking they were next to us. He got a white noise machine that we used in our room and theirs to try and mimic the sounds they were used to hearing while asleep. He was honest with me about how tired co-sleeping was making him, how unhappy he was, and how much he missed us.

I felt that what the kids needed was more important than what we wanted.

I thought he deserved the House Cup for trying so hard, but honestly, I wasn't that interested in putting an end to our co-sleeping. I was exhausted too, but I thought he was over exaggerating how little time we spent together, I felt that what the kids needed was more important than what we wanted. Plus, we had been co-sleeping for so long I was worried the boys would scream their heads off until they exploded if we made any attempt to sleep-train them.

We didn't even have a roommate-type of relationship — we had no relationship at all. I knew then that if something didn't change, we weren't going to make it as a couple.

But one night, when the boys were 18 months old, I finally realized he was right. I was coming back from the bathroom and whispered, "'Did you remember to order more diapers?" as I carefully wiggled myself between our sleeping babies. As he mouthed, "Yes," back at me, I realized that was the longest conversation we'd had all day. We didn't even have a roommate-type of relationship — we had no relationship at all. I knew then that if something didn't change, we weren't going to make it as a couple.

Some couples sext or go on date nights to keep the spark alive. I showed my partner I still loved him by sleep-training our babies during nap time while we was at work.

Luckily, my fears about the boys being traumatized in their own cribs went unfounded. Less than 10 minutes after I put them down, they stopped crying and were fast asleep. Within a week they were falling asleep in their cribs every night without a single tear and staying there until close to sunrise. After lots of long talks and some tears, we both agreed no one was at fault for how badly our relationship faltered. We chose to use the co-sleeping debacle as a lesson to remind us of the stakes when we don't prioritize our relationship. Slowly, we remembered how to sleep tangled together in the center of the bed again instead of each clinging to one side to make space for the babies between us.