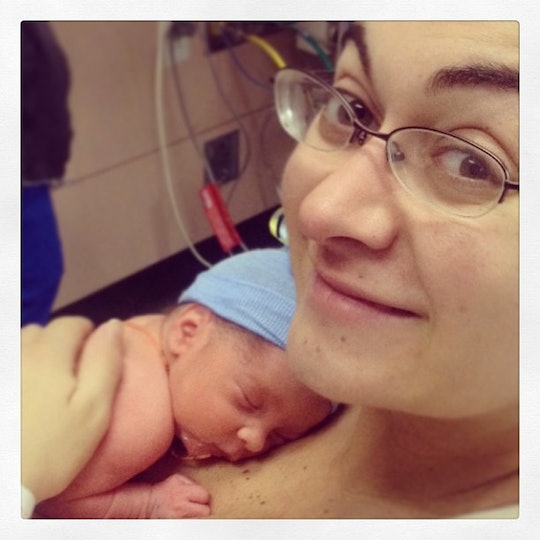 Giving Birth To My Sons 2 Months Early Was Absolutely Terrifying

When I envisioned having a baby, I pictured leaving the hospital just like they show on TV: I'd be wheeled down a hallway with a tiny bundle in my arms, my doting husband gazing down on his family with joy as congratulatory balloons trailed along behind us. In my vision I was bursting with happiness, full of smiles, and had a blow out that would've made Kate Middleton green with envy. And when I found out I was having two babies instead of one, I merely adjusted the vision of my post-delivery homecoming by adding a second baby bundle to my lap. Even though my doctor warned my that my small frame meant I could deliver prematurely, I didn't really believe him. After all, I had dealt with major infertility issues to get pregnant in the first place. Surely this entitled me to my well-deserved happy ending, right?

Turns out those framed degrees on my OB's wall weren't just for decoration, because he was right. I started to dilate at only 27 weeks. Thanks to some quick action on the part of my medical team and strict bed rest, I made it until 33 weeks before I went into unstoppable labor. Even though the NICU staff had come to my room with the hospital with binders filled with photos of premature babies and gently told me what the potential medical impacts could be as the result of my babies early arrival, I still didn't feel prepared. Nothing prepares you for giving birth prematurely. I was still freaking out over the thought of caring for two full-term, totally healthy newborns that I couldn't wrap my head around all that could come with having two preemies. When I went into labor and squeezed my partner's hand with each contraction it was partially because of the pain, but also because I was so very scared of what laid ahead for our sons.

My boys weren't micro-preemies, and I had been given steroid shots during bed rest to help boost their lung development, but they still arrived nearly two months before they were scheduled to make their debut. Lolo was just over 5 pounds, and Remy was only 4-and-half pounds. I thought they would be born just as winter began to thaw, but instead they came a day in between two massive blizzards. They were in far better health than many other preemies, but that didn't mean they were completely out of the woods.

Just after the boys were born, they whisked them away from behind the c-section screen, handing them off to the NICU team before I could even get a glimpse of their teeny, goopy heads. Remy didn't make a sound single sound when he was born and I heard the doctors murmur that he wasn't doing well. I remember wondering if he'd make it long enough for me to see him alive. The terror I felt in that moment was so strong that even now I can't think back on it without feeling my breath catch and my heart race.

I thought my biggest worries about being a mom to newborn twins was going to be finding a bra big enough to hold my milk-engorged boobs and getting enough sleep. Instead, I Googled the likelihood that my sons might have brain bleeds and/or eyesight issues because they'd been born so early. Instead of weighing the pros and cons of cloth diapers versus disposable ones, I signed forms granting permission for spinal taps to try and determine the cause of Lolo's delayed lung development.

I started asking to see the babies as soon my OB had gathered up my organs from around the OR table and sewn everything back into its rightful place. I was exhausted from the labor and my unplanned c-section and very aware that this was not how I imagined my kids' literal birth day going. And the moment they wheeled my hospital bed down to hall to a small pink thing covered in tubes that housed one of my sons inside was one of the most surreal moments of my life. Even though the nurses told me this was one of my babies, I kept looking around for Aston Kutcher and a camera crew, waiting to hear the words "Gotcha!" followed by my nurse handing me my two healthy babies to hold.

I spent the next four days being the best mother I could be, given the circumstances. I pumped every two hours, 24 hours a day after the doctors asked me to. The doctors told me the babies could benefit from my colostrum, even though I had no intentions of breastfeeding, but I did it anyway. I sat in on rounds and learned how to read lab results and charts so well that several doctors asked me if I was a nurse by profession. I did skin-to-skin time and washed my hands so often and used so much anti-bacterial that my skin eventually started to crack. I figured out how to fold a preemie diaper in half so it would fit on bodies so small they should have still been inside me, and discovered the best way to maneuver the diaper between wires and leads to get it on. I learned how to inject breast milk through feeding tubes and started to recognize the difference between Lolo actually having trouble breathing versus his sensor coming lose. I thought if I could learn how to care for a preemie perfectly, then maybe, just maybe, we'd come home together.

My very first task as a parent was to grow them inside me and deliver them into this world safely, and I'd already failed at that.

But then I was discharged from of the hospital and sent home without my sons, and I left my heart behind in two pieces.

I thought my biggest worries about being a mom to newborn twins was going to be finding a bra big enough to hold my milk-engorged boobs and getting enough sleep. Instead, I Googled the likelihood that my sons might have brain bleeds and/or eyesight issues because they'd been born so early. Instead of weighing the pros and cons of cloth diapers versus disposable ones, I signed forms granting permission for spinal taps to try and determine the cause of Lolo's delayed lung development. Even though I did everything in my power to ensure a healthy pregnancy and knew that nothing I'd done had caused my premature labor, I still felt guilty. My very first task as a parent was to grow them inside me and deliver them into this world safely, and I'd already failed at that.

Rather than relishing in the fact that I could sleep all night and recover from my c-section, I punished myself by setting my alarm every two hours to pump. I spent all day at the hospital and when I finally went home to sleep, I called the NICU to check on the babies after every middle-of-the-night feeding.

Remy was released first. After a rough first hour of life that I still don't know the exact details of, he spent a week in the NICU, chilling under UV lamps to tackle a case of jaundice and gaining enough weight to actually fit into his car seat. His homecoming was obviously bittersweet. As good as it felt to have him home, it was so glaringly different from the vision I had in my head that it was almost worse than when they were both in the hospital. Plus, having him home meant having to leave one of my babies to visit the other, so no matter which baby I was with I was always worried about his brother.

The truth is that I'll never fully recover from having preemies.

Lolo came home a week later, and we began a strict schedule of visiting nurses and pediatric cardiologist appointments. I didn't have the option of being a laid-back parent. The boys were so small and at such a high risk of infection that we were told to keep them in the house away from germs and to feed them every three hours, no matter what. Rousing a sleeping baby and pleading with them to swallow another 5 milliliters of milk and then fretting when they took less than that became my new normal. In spite of our best efforts, the boys still contracted a serious respiratory infection called RSV and were readmitted to the hospital exactly one month after they were born.

Naturally, I blamed myself.

Eventually, things changed. After a few months the boys passed the 12-pound mark, which meant we no longer needed weekly in-home visits from a nurse and we didn't have to wake them up in the middle of the night to feed them, so all of us started getting a lot more much needed sleep. At 6 months, we got the news that Lolo's heart issues had self-resolved, and that he wouldn't require surgery. I slowly started to feel more like a mom than a nurse and found myself thinking about the kids' emotional well-being as much as their physical health.

I know that in the grand scheme of things, I got lucky. My boys are 3 years old now, completely healthy, and on track developmentally. (The kids and I got into a fight about where Tennessee is on the map this morning. They were right.) When I look back on my boys' lives thus far, and somehow the time we spent dealing with the NICU and preemie-related issues seems like a very small part of it.

But the truth is that I'll never fully recover from having preemies. There will always be a part of me that bristles when I hear a pregnant woman in her third trimester complain about being uncomfortable because I would have given anything to have been in her position. The same goes when a newborn mom complains about how little sleep she's getting with an infant in the house. I know these feelings aren't fair, that everyone's situation is unique, and that my own experiences don't make their complaints any less valid, but knowing I'm being irrational doesn't stop me from seething with jealously.

Having preemie twins was my first introduction to one of the most basic tenants of parenting: that hardly anything goes according to plan. If there's anything good that came of having preemies, it's that I learned I can make plans for my kids, but ultimately I don't control them. Still, for me having preemies is something I can move past, but something I'll never get over.