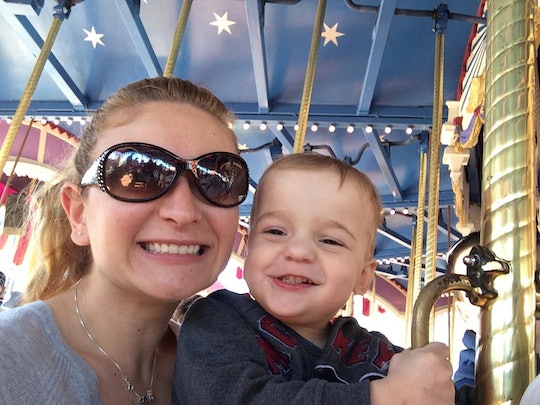 I'm Infertile & I Have No Clue Why

The women in my family are known for three things: thick, glorious hair, our wicked senses of humor, and how big our family is. My grandmother had seven children, my aunt had five, and my mother had me, saw how amazing I was, had my sister, and then realized the world wasn't equipped to handle anymore awesome so she she stopped there. Because fertility has never been a problem in my family, I always assumed that when I was ready to become a mom it would happen easily for me, too. But as the fates would have it, I'm infertile, and I have no idea why.

When I was in kindergarten, I started to develop pubic hair. We're not talking about few dark strays moving into the land down under. I had, what I like to call, a full-blown beaver peering out from the edges of my Little Mermaid underpants seemingly overnight, and no one could explain why. My mom took me to the pediatrician who recoiled in shock and sent me to a children's hospital where a team of doctors poked and prodded and searched for answers. Despite countless blood tests, my team of physicians and interns were stumped. My thyroid and hormones levels all came back normal, and my ultrasounds revealed that my reproductive system looked fine. They told my mom to return the Easy Bake Oven she got me for Christmas and replace it with a razor and some shave gel and sent me on my way.

I discovered the hormones from my birth control pills had hidden an awful truth: without the medication, I no longer had a period. My estrogen levels matched those of a woman in menopause, and my ovaries had only a few egg follicles left.

Except for some really awkward moments changing into my pajamas during slumber parties, for a long time I thought there was nothing wrong with me. I developed boobs and got my period at the same time as all my friends. My cycle was normal, my sex drive typical for a teenager (read: through the roof). I went on birth control at 16, and stayed on it pretty consistently until I decided to try and get pregnant at 27.

It was then that I discovered the hormones from my birth control pills had hidden an awful truth: without the medication, I no longer had a period. My estrogen levels matched those of a woman in menopause, and my ovaries had only a few egg follicles left. I had irreversible premature ovarian failure and zero chance of conceiving without significant medical intervention. But why?

When I was first diagnosed I went back and forth for months between disbelief and complete devastation. Given my family history, it had never even occurred to me that I might have trouble conceiving. I felt like I was being unfairly punished by the universe. I'd followed the "good girl" path of practicing safe sex until after I'd graduated, married, and was financially able to support a baby, and now I realized that was all for naught. It's a selfish thought, but I kept thinking I was being denied the chance to have the pregnancy I deserved.

The hardest what ifs aren't about the past, though. They're about the future.

There are many couples who struggle in infertility's clutches for years without every breaking free, but I was lucky enough to get pregnant with twin boys on my first round of IVF. Just because I found a way around my infertility, however, doesn't mean it isn't something I still think and worry about.

Part of my worry is simply FOMO. I know I was lucky to get pregnant relatively easily, all things considered, but there will always be a part of me that wonders what it's like to just have sex and get pregnant without having to go to a million doctors appointments or spend a big pile of money. Another aspect of my infertility that keeps me up at night is wondering if I did anything to cause my situation, if my actions or life choices somehow got me to where I am. Was it the Plan B pill I took once in college when the condom broke? Did that mess something up inside me? If I had tried to have kids earlier, like before I went to grad school, would it have happened then, or were my ovaries already failing by that point? Should I have tried to be a younger mom? Is this karma because I cheated on an old boyfriend?

Every year when I go to my annual OB-GYN visit I ask my doctor what caused my infertility and he says,"We just don't know, sometimes these things happen." I understand doctors are just people and they can't have all the answers, but when it's your body and health on the line, you hope for something a bit more reassuring than a shrug from someone with years of specialized training.

Hormone levels are controlled by the brain, yet I've never had a brain scan, so I fear my infertility is telling me there's a tumor leasing out part of my head that no one knows about. It could be an autoimmune response where, for whatever reason, my body declared war against my ovaries, and won. But if that's the case, who's to say my heart or liver won't be next? Some genetic conditions, like Fragile X syndrome, are known to cause infertility, but even though I have some Fragile X markers in my DNA, I don't have enough to be considered a carrier, so that's not the answer either.

Every year when I go to my annual OB-GYN visit I ask my doctor what caused my infertility and he says,"We just don't know, sometimes these things happen." I understand doctors are just people and they can't have all the answers, but when it's your body and health on the line, you hope for something a bit more reassuring than a shrug from someone with years of specialized training. Plus, what if the answer is really easy, and I just don't know it yet? What if I just stopped eating pineapple and bingo, my ovaries were back in business?

The hardest what ifs aren't about the past, though. They're about the future. When my doctors found out about my condition, their concern was how to overcome it and get me pregnant, not figure out the underlying cause. While I appreciate their dedication to help me build the family that I've always wanted, I fear my infertility could be a symptom of a more serious or life-threatening condition that none of my doctors have picked up on yet, and by the time they do, it'll be too late.

Thanks to advanced reproductive technology, I was able to become a mom in spite of my infertility. I've made peace with the fact that this is the path I had to take to bring my kids in to this world, and I wouldn't want to go back in time and cure my fertility issues, because if I did, these particularly amazing children who spent the morning putting stickers on the cat and running up to me for quick but fierce hugs wouldn't be here. I don't lie awake at night wondering, "Why me?" But that doesn't stop me from wondering, "Why?"

More Like This
Fun, Sexy Maternity Lingerie, For When The Mood Strikes
Why Your Vagina May Be Itchy After Sex & What To Do About It
What Foods Fight Nausea During Pregnancy?
OB-GYNs Explain The Connection Between Stress & Miscarriage
What Parents Are Talking About — Delivered Straight To Your Inbox