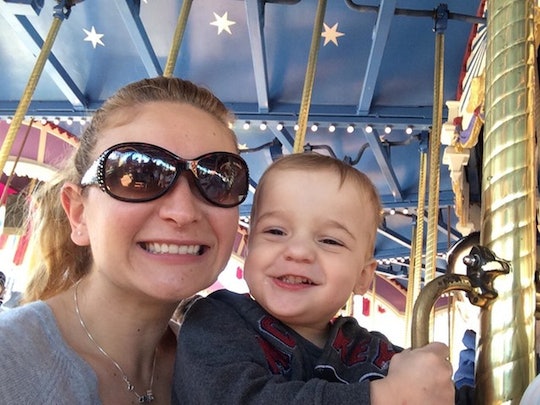 I Have Premature Ovarian Failure & This Is What It's Like

Like many women, I used to despise my period. I hated the cramps, the bloating, the overly dramatic, door-slamming fights I'd get into with my sister. I would've given anything to make it go away forever. Five years ago, right as I finally decided I was ready to have kids, it did. I learned that I have premature ovarian failure (POF) and in the blink of an eye the cramps, the bloating, and the dramatic, door-slamming fights all became pieces of the past. The silver lining was that I'd gotten rid of one problem. The bad news was that life with premature ovarian failure created dozens more.

Even though I'm only in my early 30s, my premature ovarian failure means that my brain releases hormones in low levels usually seen in women in their 60s. My doctors haven't been able to give me a reason why I suffer from premature ovarian failure or answer what, exactly, caused it. Medicine's best guess is that it's some type of autoimmune disorder where my body thinks my ovaries are unhealthy tissues that should be attacked, and my brain listens.

At the time of my diagnosis I couldn't see past the seemingly insurmountable hurdles premature ovarian failure created in wanting to bear children. When my doctor sent me out for my initial blood work I remember her saying, "Worst-case scenario it's premature ovarian failure, but that's highly unlikely." I know she said that to comfort me, but now I was living the worst-case scenario, and instead of answers, all I had were dozens and dozens of questions.

I spent months enraged over the news. I'd done everything right. I'd gone to school, received an education, I worked, I'd gotten married, and now that I was finally ready to start a family I was slapped with the reality that my best chance for getting pregnant passed me by when I was still in high school. It felt like a sick, cruel joke. I did what I was supposed to do, and I was being punished for it. In the days and weeks following the diagnosis I forced myself to work through the feelings of anger and frustration as I worked with a team of reproductive specialists to try and get pregnant, but there are still times when the unfairness of it all makes me see red.

Having POF means I don't have a monthly cycle, so I don't get my period. Every couple of years I'll have a few days of light spotting and that's the only time I'll ever see Aunt Flo. When I was first trying to get pregnant and newly diagnosed, I mistakenly believed this spotting meant I had been miraculously cured, and I was devastated to find out that wasn't the case. It may sound like every girl's dream to never have a period, but it's actually not as great as you'd think. Sure, it's nice to never have to check the calendar when planning a vacation so you're not thinking about changing tampons on the beach, and I don't miss the cramps, but you don't realize how much women relate to each other over their periods until you're totally excluded from the conversation.

It's hard to feel like a woman when I lack the ability to do the very thing that separates us from men.

Standing in a group of friends and having them discuss who's bloated, who's got cramps, or who's tried one of those menstrual cups and having nothing to add to the conversation makes me feel left out. Even my closest friends forget about my condition, and if we're out together and they ask if they can borrow a tampon, I feel bad, not only because I have nothing to offer them, but because it's yet another reminder that my body doesn't work like it's supposed to.

I know it's not anyone's intention, but bearing witness to conversations and moments like this and having nothing to add feels like being excluded from the popular clique in high school. Of course my friends don't ever intentionally exclude me or make me feel less than because I don't have my period, but I still feel like an outcast, and no matter how many times I listen to Fight Song it doesn't change the fact that I am different from most women my age. It's hard to feel like a woman when I lack the ability to do the very thing that separates us from men.

Back when I used to get my period, I'd use those achy first days as an excuse to be kind to myself, to snuggle up on the couch with a heating pad, some ice cream, and a marathon of crappy reality television or HGTV. I can still do that, of course, but with POF such an indulgence isn't considered me taking care of myself, it's simply me being lazy. It's lot harder to enjoy a lazy day over a day of self-care without feeling guilty.

You'd think that my POF has a silver lining in that I never have to worry about birth control (and in fact, my husband loves never having to worry about having a condom on hand). Although that's technically true — I don't need to take birth control pills to prevent a pregnancy that can't happen — taking my birth control pills is more important now than it was back before I was diagnosed. I could take a hormone replacement pill instead of birth control, but doing so would require my doctor to readjust my levels often and some hormone replacement pills carry a high risk of developing Alzheimer's and dementia, so for now I take the pill.

Imagine feeling like there's flames inside your skeleton, and nothing you do can douse them.

Taking birth control every day keeps my hormone levels even, and if I accidentally skip a day my body lets me know immediately with a migraine. I used to think the migraines I suffered in college were from stress, but once I was diagnosed my doctors realized my migraines came every time I went onto the placebo pills of my birth control. Without the birth control hormones to mask my naturally low hormone levels, I plunged into a migraine. If I miss I pill I'm also rewarded with hot flashes. I always thought my grandmother was exaggerating, but if anything, she wasn't giving them proper due. Imagine feeling like there's flames inside your skeleton, and nothing you do can douse them.

You'd think removing the possibility of getting pregnant would mean I at least get to enjoy carefree sex, but POF also plays a role in my sex drive, or lack thereof. Taking birth control helps, but without it I have very little interest in sex, and even with it, sex can be painful without tons of lubrication. I always thought the best part of growing up and becoming and adult would be getting to have sex in my own home whenever I wanted, but having young kids and POF makes maintaining an intimate relationship with my husband a challenge. There have been times when I've had sex even when I don't want to or it hurts because I feel like my partner deserves someone who has a normal sex drive, so I pretend like everything is fine and I'm enjoying myself. Other times I level with him and he's always understanding, but it doesn't stop me from feeling guilty.

Having a hormone level that is so much lower than it should be at my age leaves me at risk for many medical issues if I don't take hormone supplements. Premature ovarian failure leaves me more susceptible to a host of scary health conditions like coronary heart disease, anxiety, thyroid conditions, and even conditions like RA and Lupus. Making sure I take my birth control pill every single day at the same time helps reduce the risk of these conditions.

I've always loved working up a good sweat, but POF gives me even more motivation to lace up my sneakers on the days when the couch feels so comfy and I'd rather stay home. Even with taking my birth control pills, premature ovarian failure puts me at a very high risk of osteoporosis and bone loss. I had my first bone density scan last year and already my bone density is less than it should be for someone my age. Strength training with weights and load-bearing exercises like running can help prevent further bone loss and even rebuild my bones. So when I head out for a run I'm thinking about so much more than my per-minute mileage time or how I'll look in the mirror. Staying healthy is my primary goal.

It's hard to watch friends and family eat whatever sounds good to them while I try to figure out which salad is the most likely to prevent further bone loss.

Having POF also puts me at a higher risk of depression and anxiety. Exercise helps me keep those panicky thoughts at bay.

Even my diet is effected by POF. I think frosting should be a food group and will eat anything if it has cheese on it, but having POF makes me think twice about reaching for a cookie over a calcium-rich yogurt. I'm hyper aware of my slow-for-my-age metabolism and whether I'm getting enough vitamins and heart healthy foods and it's hard to watch friends and family eat whatever sounds good to them while I try to figure out which salad is the most likely to prevent further bone loss.

Having POF makes getting pregnant incredibly difficult. While there are some doctors who are willing to let women with POF attempt IVF, because many women with POF have little to no egg follicles, and those they do have are often of poor quality, many doctors won't even attempt the procedure. Another option for women with POF is to attempt pregnancy through IVF using donor eggs. Both options are expensive, time consuming, emotionally draining and require lots of doctors appointment and self-injections.

Out of respect for my children's privacy I don't comment publicly about the specifics of how I became pregnant, but suffice it to say that I'm very happy I ended up with the "buy one baby, get one free" special. Even though I know I am very, very lucky that I was able to have a healthy pregnancy and have a family, there will always be a part of me that's jealous of women who can get pregnant without medical intervention. It's nice to know I can plan a trip to another country a year from now and not have to worry about being heavily pregnant when I fly, but there's also a tiny part of me that feels like some of the surprise in life is missing because I'll never have sex and just "see what happens." Life with premature ovarian failure has left little, if anything, up to chance.

More Like This
Ashley Graham On The “Fun, Organized Chaos” Of Raising Twins
These Stepmother's Day Instagram Captions Are Straight From The Heart
Stepmom Quotes & Sayings For Every Occasion
Everything You Need To Know About Postpartum Blood Clots