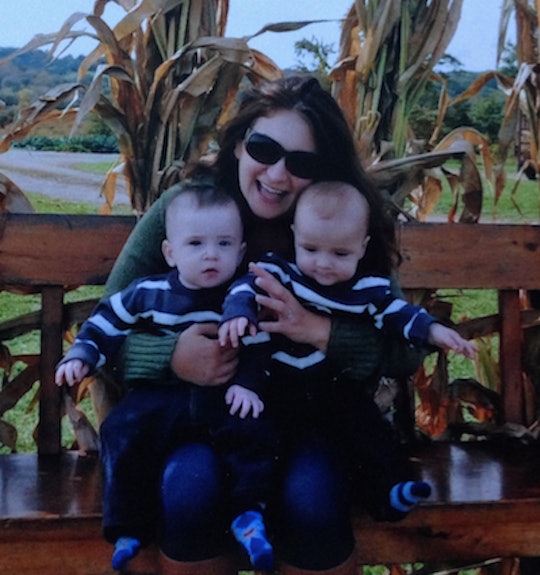 Turns Out, Getting Pregnant Using IVF Is Actually Really Awkward

When I signed away my life savings to pay for a round of in vitro fertilization in hopes of getting pregnant, I thought I knew what I was getting myself into. I was prepared (but still scared) of the daily injections, was aware that the procedure might not work, and knew that if it did, there was a good chance I could end up with a buy one, get one free special, aka twins. But I was so focused on the dream of experiencing pregnancy that I never stopped to ponder what would have to actually happen in order to get there. Although it's an amazing feat of modern science, trying in vitro fertilization (IVF) is so awkward.

Before my infertility diagnosis I had only ever had female OB-GYNs, since I wanted a doctor who could be appropriately empathetic when I said it felt like my period was a bear attacking me from the inside. But the best doctor at our hospital who specialized in premature ovarian failure also happened to be male, and at that point I was so desperate to get pregnant I would've let a gnome put his hands up my skirt if meant I'd get a baby for my troubles. Uncomfortable as it was to make small talk with a dude as he sticks his fingers so far up inside you you're certain he's trying to reach your tonsils, I grew pretty comfortable with my doctor, enough so that he knew I was joking when I asked him to make me the next TLC star by transferring 12 embryos into me instead of 2.

After the eggs and sperm are in the hands of the lab, they mix them together using The Science, and you wait to hear how many embryos are viable and whether it will be a three-day transfer or a five-day transfer. I knew all this going in, but I thought the doctor would just call me with an appointment date and a time to come back. Instead, I got regular calls from the lab technician with updates on our eggs. She would call every morning and say things like, "I've got the gang right in front of me and it looks like 18 are doing great!," or, "Hang on, let me tuck them in and I'll call you back." It was like getting a daily report from a daycare teacher on how your kids did that day, only on microscopical balls of cells.

I didn't give the doctor a golden shower during the procedure, but there were some close calls in the moments when the ultrasound wand pressed right on top of my bladder.

I knew I was looking at a Thursday or a Saturday transfer, and since my doctor wanted me to relax for a couple days after, I told my boss about my upcoming procedure. He told me how his sister, who did IVF as well, kept her hips lifted on a pillow afterwards, so I should do that as well. That was one of the stranger conversations I've had with my boss, and if I didn't have any fertility issues there's absolutely no way I'd discuss the sex my husband and I had to get pregnant with him. Even so, the fact that I was undergoing IVF somehow made it OK for him to tell me what to do with my pelvis.

Days later, my doctor called with good news and bad news: we were definitely going to be able to transfer two embryos on Saturday, but he had a wedding to attend, and therefore had to pass off my transfer to another doctor. The rational part of me totally understood that doctors have lives outside work and I would be in good hands, but the part of me that was pumped full of hormones cried like he was my fiancé telling me he couldn't make it to our wedding. I tried to use his guilt as leverage to get him to agree to transfer a third embryo to increase my changes of getting pregnant, but no dice.

As I walked into the clinic bright and way, way too early that weekend, I realized the irony in my current situation. I spend many a Saturday in college taking precautions to make sure I didn't get pregnant by a guy I had just met and yet here I was, paying thousands of dollars to do exactly that.

My doctor shocked me when he went over to a window I hadn't noticed before and knocked. It slid open to reveal the top half of a woman waiting at the counter, like a drive-thru window or door to Narnia. He ordered up my embryos and I bit back the urge to request a large fry as well.

Since IVF is technically a medical procedure, they have you don a classic medical gown for the insertion. While the lack of panties matched the vision in my head, a thin, drafty, faded puce hospital gown was hardly what I thought I'd be wearing when I got pregnant. As I walked into the procedure room, the doctor said, "Who's ready to get pregnant?," and I asked, "What, no flowers, no music? Where are the candles?" He laughed and fired back with, "We'll have to listen to the music in our hearts." Even though he wasn't the doctor I'd signed up for, I liked this guy.

Part of my pre-procedure directions had been to drink plenty of water before coming to the clinic, because an inflated bladder makes it easier for the doctor to place the embryos in a good position in the uterus. I took that as, "drink 16 ounces of water immediately upon waking and then two bottles on the drive over." I had my husband stop to get Fiji water, because it made complete sense to my baby crazed brain that the embryos might not stick around if I drank plain old tap water instead. The nurse noticed this as she placed the ultrasound wand on my belly and asked if I wanted to "take a little off the top," but I assured her I was fine, because I really thought the bigger my bladder was, the better my chances were of getting pregnant. And that, kids, is why you should always listen to the nurse. As much as I was trying to memorialize this momentous occasion in my head, I was distracted by my need to pee. I didn't give the doctor a golden shower during the procedure, but there were some close calls in the moments when the ultrasound wand pressed right on top of my bladder.

Finally, it was time to get the embryos all up in me. My doctor shocked me when he went over to a window I hadn't noticed before and knocked. It slid open to reveal the top half of a woman waiting at the counter, like a drive-thru window or door to Narnia. He ordered up my embryos and I bit back the urge to request a large fry as well.

Then the moment arrived for the doctor to insert the tube that would plunge the embryos into my uterus. I had always imagined that my husband would say "I love you," or, "You're the best," or even, "AHHHGGGOOOOOOH" the moment I got pregnant, but instead the doctor looked down on me and said, "Your uterus has a big bend to it." Thinking this was some sort of compliment I said, "Thank you?" "No," he said laughing, "It means I can't get the embryos in position." He turned to the nurse and asked her to go find a more flexible insertion tube.

I waited, legs splayed open like a car getting an oil change with an ever-increasing urge to pee. I was worried that the embryos were going to get cold and die waiting around like this. I was just about to offer to sit on them, penguin style, when the the tube was found at last.

I probably should have been reflecting quietly upon the meaning of life after the transfer was finally over, but all I could think about was finding the restroom. Then the nurse they needed me to lay down and be still for 20 minutes to give the eggs a chance to settle in. I told her I had to pee more than I'd ever had to pee in my life, but when she furrowed her brow and asked if I could hold it, I knew that if I wanted this pregnancy to take, I was going to have to cross more than just my fingers. I made it 14 minutes, 35 seconds before I simply had to go. I looked in the bowl before flushing and noticed two tiny black flecks floating in the bowl, so I did what any rational woman would do: I called for the nurse and a strainer, since I was positive I had just peed out my babies.

When I first decided I wanted to have a baby, undergoing IVF wasn't how I envisioned myself getting pregnant. But even the process wasn't without its difficult moments (looking at you, needles and hormonal mood swings) its wasn't as bad as I feared.

Getting an infertility diagnosis is a sobering affair. I got so used to doctors giving me quiet speeches and gentle hand pats that were intended to be comforting that the whole "trying to have a baby" part of my brain seemed very serious, ominous even. But in reality, even though there was lots of complicated science involved, my IVF process was actually filled with hilarious moments, just like the rest of my life.

More Like This
A C-Section Actually Doesn't Take As Long As You Think, According To Experts
18 Pregnancy Announcement Ideas Break The Good News To Your Family
The Ultimate Baby Registry Checklist
24 Beautiful Baby Names With The Same Vibe As Mila