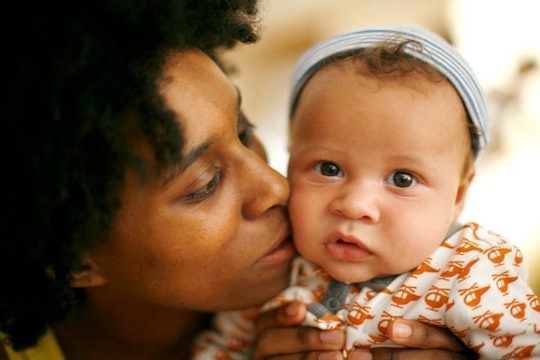 I Chose Not To Breastfeed & I Don't Regret It At All

Everyone knows that the best thing you could do for your baby is to breastfeed them. In most cases, whether or not you breastfeed is the ultimate sign that you're a "good" mom. But I chose not to breastfeed my baby, and I don't feel bad about it at all. I also know that my choice doesn't make me a bad mom. Before having my daughter, I didn't really have strong feelings about breastfeeding. I bought a pump so I could freeze milk once I started weaning my daughter, Riley, and so that I could eventually mix my milk in with formula, or cows milk if we made it that far. But the first day in the hospital after she was born, she wouldn't latch. My nipple hurt, I was tired and I didn't want to keep trying. So, I didn't. I gave my newborn baby formula, I pumped, but I never once felt guilty for making that choice.

For the rest of that first week, I'd practice breastfeeding her when we would wake up and go to bed, but in between, I gave her formula in a bottle. I kept telling myself that I'd try more the next day, but the next day would come and go and I felt myself withdrawing from the whole process. At night, I completely gave up and handed over night feedings to my husband, which in turn helped him create beautiful bonding opportunities with our daughter. Feeding was something he could be wholly involved in while I got a much needed break. It also gave me the sleep I so desperately needed.

At the time, so many women I knew who were also mothers tried to shame me about my lack of breastfeeding. But it never really bothered me. If anything, their advice only frustrated me. I was adopted, so I was raised on formula, and so I never had this idea in my head that formula is a form of "child abuse," as some women told me when we talked about our preferred feeding styles. The way I saw it (and still see it), having a baby take a bottle right away made my life so much easier. I could leave her with my mom or husband if I needed a nap or to run errands. Formula-feeding gave me freedom. Every once in awhile I'd question if I was being extremely selfish by choosing not to breastfeed, but then my baby kept growing and meeting all of her developmental milestones on time, and I worried less and less.

I've spent every single day of their lives trying to do what is best for my children. Choosing not to breastfeed was just one example of that.

When I found myself pregnant again, this time with a son, I promised myself that I'd try a bit harder with the breastfeeding. He latched straight away, but then he'd just fall asleep on my breast. I hated that — even more so because I had a 14 month old running around to chase after. Breastfeeding my son Beck made me feel like I was chained to the couch, or whatever chair I was sitting in. So I weaned him off breastfeeding after six weeks, alternating with a bottle so that wouldn't be a battle for us. It's been six years and I still think it was probably the best thing I ever did for us both. At 6 years old, he lives in my arms and barely sleeps on his own. I knew that kids can self-wean, but I also knew Beck, and I knew he wouldn't have. It's just not who he is. So yes, even though hindsight is 20/20, I felt like weaning him so soon was the best option for both of us.

I never believed that by choosing not to breastfeed put my children at risk. Formula feeding never put their health on the line. I never once felt like my decision was in any way selfish, or that I had somehow tainted their futures. I did what felt right to me and for my two children. Then, and now, I've spent every single day of their lives trying to do what is best for my children. Choosing not to breastfeed was just one example of that.

All I could think of was, why are you putting yourself through this? When I asked her, she said, "Because it'll be worth it. Having to ice my chest everyday isn't so bad." I, on the other hand, wholly disagreed. It wasn't worth it to me.

But choosing not to breastfeed also mattered to me for other reasons. When I was first pregnant I just assumed I'd be the one to stay at home with my children. I wanted to help them grow into the people they are today, and I thought that the best way to do that was to be with them 24/7. I quickly learned, however, that I did not want to spend every waking moment with them. I needed to have some freedom to be myself, to use the bathroom alone, to eat a meal without needy hands reaching for my plate or for me. Having children who took bottles early on enabled me to have me that kind of freedom. I could leave the house for hours when they were tiny and not be concerned about rushing back in order to feed them.

One time, around when Beck was about 6 months old, we were at a birthday party when a few other women were sharing their own breastfeeding stories. One woman talked about how she'd met with a consultant after giving birth to help her with breastfeeding. I look back and sometimes think maybe speaking with someone is an option I should have considered more. But then she described her nipples being chaffed so badly that they bled constantly, and I was so horrified. All I could think of was, why are you putting yourself through this? When I asked her, she said, "Because it'll be worth it. Having to ice my chest everyday isn't so bad." I, on the other hand, wholly disagreed. It wasn't worth it to me. Having a child on my breast everyday did sound so bad to me. In fact, it sounded like hell. I looked down at my son, as he held a bottle and fed himself, and I was instantly reminded of all the reasons why I'd chose not to breastfeed, and I was glad.

New parenthood, for me, was fraught with moments where I searched desperately for validation that I was doing the right thing. So to have that moment that felt like pure victory — that was proof that I was a good enough mom even though I didn't breastfeed — was unforgettable. That mother's choice was her own, and I realized that mine was, too. My kids were happy. And healthy. And loved beyond words. What did it matter how I chose to feed them? And what did it matter what another woman chose to feed her child? After that day, I walked a bit more confidently as a mother. I realized that my validation would never come from other people — it'd come from me instead.

Now that I'm older, and considering having another baby sometime in the next two years, I often think about what my stance on breastfeeding vs. bottle-feeding will be. I know that I'm open to breastfeeding, but I'm not limiting myself to only breastfeeding. I'm not going to beat myself up over something that might cause me to be frustrated or upset, because for me personally, that's not the kind of parent I want to be.

More Like This
21 Earthy Baby Girl Names For Your Little Force Of Nature
20 Perfectly Proper Tudor Baby Names
How To Breastfeed A Baby With A Cleft Lip Or Cleft Palate
Can You Do Zumba While Pregnant? Experts Weigh In