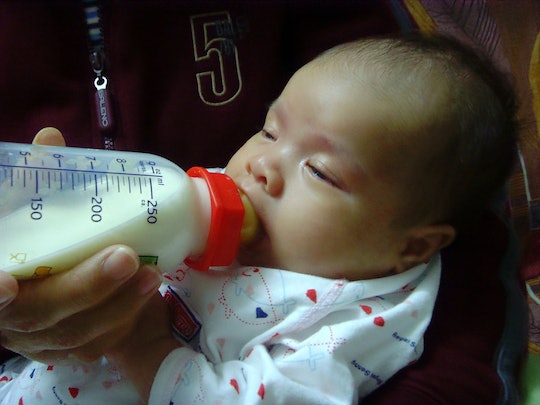 When you get discover you're pregnant, plenty of things go through your mind: happiness, dread, worry, excitement; you name it. We get to experience pretty much every emotion in those first few days while the big news digests. What you don't think about, though, is the fact that when you take on the responsibility of a baby, you apparently take on the responsibility of every other parent's views and opinions and you can never do anything right. Like, ever. Did you choose to breastfeed your baby? Take it inside; No one wants to see that. Formula feed? That's so bad for your baby! You're co-sleeping? You'll roll over on him! Sleep training? I can't believe you're leaving her all alone in the nursery so soon! See? As much as you try to do any and everything in the best interest of your kid, someone somewhere is going to have something negative to say about it. (And don't even think about hitting up those online mom forums to help because you'll get those judgy lectures a million times harder.)

And aside from strangers, there will be the people in your personal life who are also armed with lots of opinions: There's your best friend, who has never had a baby, going on and on about how she "can't believe" you're not breastfeeding; Or the mother-in-law who repeatedly talks about how her kids nursed and they "grew up just fine." It's like a never-ending, ongoing debate that you'll never get out of. So buck up, as you'll learn to do, and take what people say with a hefty grain of salt.

When I decided to exclusively formula feed, I was motivated by a combination of not being able to produce enough milk and never feeling comfortable with the idea of breastfeeding for myself. I can't even explain what it was, but the idea itself scared me and brought on so much anxiety that I knew it would be best for my son if he didn't have a mother riddled with anxiety at every feeding time. And you know what? He is an insane and spunky kid who now guzzles milk from the jug and readily runs around naked.

To be clear, I have never felt any ill will toward those who do exclusively breastfeed their babies. In fact, I see it as truly one of the most beautiful things in the world and I celebrate the practice of breastfeeding wholly and without reservation. And yes, sometimes I wish that I had swallowed my issues and gone that route with my kid. I think everyone wonders if the choices they made were ultimately the best choices, even if we logically know that that's a useless exercise to indulge in, and even if we feel totally confident about what we chose.

But all of that doesn't mean I was exempt from judgment from a lot of people about my decision to formula feed my kid. And most often, that judgment sounded like this:

More Like This
Here’s What You Need To Know About That Viral 1960s Baby Formula “Recipe”
Abbot's Formula-Producing Plant Can Reopen In As Early As 2 Weeks — Now What?
Gerber's New Spokesbaby Isa Has The Biggest Brown Eyes & Was Born With A Limb Difference
Ashley Graham On The “Fun, Organized Chaos” Of Raising Twins