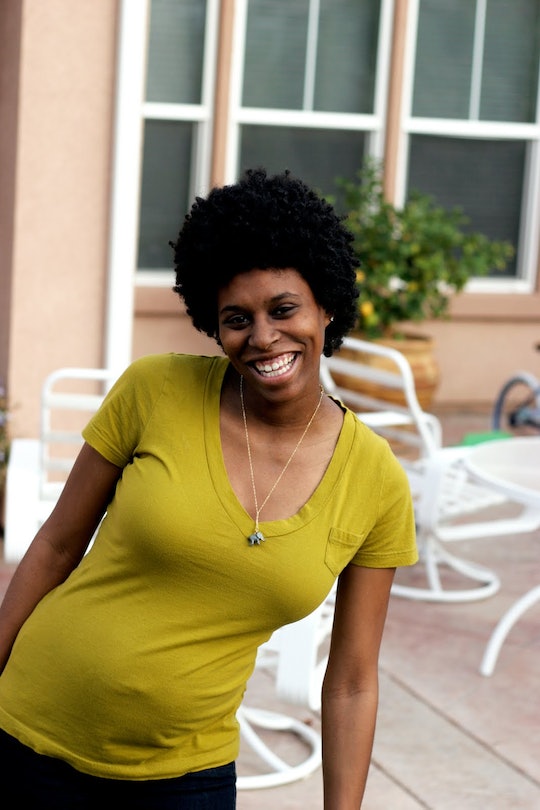 Actually, I Loved Being Pregnant

I loved pregnancy more than I ever imagined I would. When I tell people this, the first thing they point out is that I haven't been pregnant in almost seven years. And while that's true, I still remember constantly talking about how much I loved being pregnant during both of my pregnancies. My journals are full entries where I just gushed over how wonderful it is. Actually, looking back, I was That Woman a lot of pregnant women don't enjoy: my pregnancies were both very easy, and even when I suffered from morning sickness, it lasted for two months and then it was as if it never happened. Having such easy pregnancies has made me nervous for the future, though. I want to have children, but really, the number depends on the week. This week, I want two more children, but last week, I wanted none. What if the next pregnancy I have is just nine months of hell? I worry. What if it's nothing like I remember? But then I think back on how wonderful it was, and I'm determined to try again.

The day I found out I was pregnant for the first time was totally shocking and overwhelming. I was just 20 years old and still in college. In all honesty, I hadn't even been around that many pregnant women. The majority of the people I knew who'd been pregnant were my mom's friends. I didn't even know what to expect. But as I came to terms with the fact that I was indeed pregnant, I thought about how my ankles were going to swell, how I was going to grow miserable and uncomfortable, how my clothes would soon stop fitting me. I dreaded the fact that I'd eventually get morning sickness and have to give up so many things I loved eating. I braced myself for nine months of agony. But what I got was the exact opposite.

The agony I'd prepped myself for never actually came. My appetite changed and I had cravings, but I skipped the morning sickness entirely. My ankles never swelled, even in the end. Everyday I'd wake up and rush to the mirror to see what my swelling stomach looked like. I hated that it took so long for me to actually look pregnant because I was so amazed by what my body was doing. I wanted everyone to see that I was this magical being, growing a person inside my body. My hands were constantly resting on my belly, even when it was so tiny. I talked to my baby everyday, talking about things I saw, what we'd do together someday, who I hoped they'd be. I was in love with everything about pregnancy.

My entire first pregnancy was just a series of beautiful moments, one after another.

The OB-GYN I had gave us an ultrasound at each appointment. I got to see my baby once a month, and then eventually every two weeks. I couldn't believe that a human was actually being created within me. The first time I felt a kick, I wasn't sure it actually happened. I sat as still as I could, hoping I'd feel it again. And then, I felt another kick! Everything was new and exciting, wonderful and perfect. My ex-husband and I would just lay on the bed watching my stomach. And one of the most beautiful moments we've had together as a soon-to-be family of three was the first time I took his hand and put it on my stomach as our daughter moved inside of me. In that moment, time stood still. It was pure magic. Exciting, thrilling magic. And I felt so lucky to be a part of it.

Looking back on it, it felt like my entire first pregnancy was just a series of beautiful moments, one after another.

Before pregnancy, I'd never really seen myself as a beautiful person, and I didn't really admire or appreciate my body. But when I was carrying my first child, everything changed. Suddenly, I could see myself for who I really was and I had the most respect for my body, because it was changing in front of my eyes. It was home to a baby who would eventually come into our lives and change our worlds.

I'd catch the reflection of my changing body in the mirror. I'd see my growing, changing body, and I'd feel a swell of pride.

Pregnancy was also the first time in my life when I could stand in front of a mirror for longer than 10 seconds without being frustrated with what I saw. I felt beautiful, like a magical being. That is one of the reasons I loved being pregnant so much: I was able to see myself in a way I'd never been able to before. Even now, I attribute my journey of self-love all the way back to my first pregnancy.

I got pregnant for the second time when our daughter was just 5 months old. We lost that baby, and even though it was very heartbreaking, I was amazed by what my body did during that process. I was grateful for it. I had moments where I beat myself up a bit, blaming myself for losing the baby, and blaming my body for what it didn't do. Yet, I also felt so proud of it. Proud that I could mourn and also endure. Proud that what had devastated me did not break me. Right after that miscarriage, I got pregnant again for the third time and I was nervous that I'd either lose this baby too, or that I'd experience a rough pregnancy. And even though it did start out rough, with almost eight weeks of morning sickness, it was smooth sailing from there.

I don't really remember my second pregnancy as well as I remember the first one, but I do recall the moments where I'd catch the reflection of my changing body in the mirror. I'd see my growing, changing body, and I'd feel a swell of pride. When my daughter climbed up onto the couch next to me, laying her head down on my belly, she'd try to talk to the baby growing inside of me and hug my belly. Time would again freeze, as I took stock of the fact that I was able to share a second pregnancy with my first-born child. Instead of it just being two of us laying on the bed feeling the baby kick, there were now three of us. I was beyond grateful to be experiencing a pregnancy again after losing a baby, so everything just seemed even more special this time around.

After giving birth to my son, I laid my hands on my belly, which suddenly felt so empty. Of course, I could see the child I carried, laying next to me, sleeping, but I still felt a bit of sadness. I was sad that it was over, sad that my child no longer lived inside of me, sad that I couldn't be woken up by kicks. Except, little did I know at the time that for the next six years, not just one, but two sets of little feet living outside of my body would still wake me up every morning.

For me, pregnancy was something that made me feel connected to myself in a way I'd never experienced before. I respected myself and the sacred process of growing a baby inside of me. I saw myself as a beautiful and capable being who was able to bring life into the world. If I was guaranteed more easy pregnancies, I'd do this over and over again — no questions asked.

More Like This
Stepmom Quotes & Sayings For Every Occasion
11 Signs You're Sexually Attracted To Someone, But Not In Love With Them
Are Movie Theaters Too Loud For Pregnant People? OB-GYNs Explain
A C-Section Actually Doesn't Take As Long As You Think, According To Experts