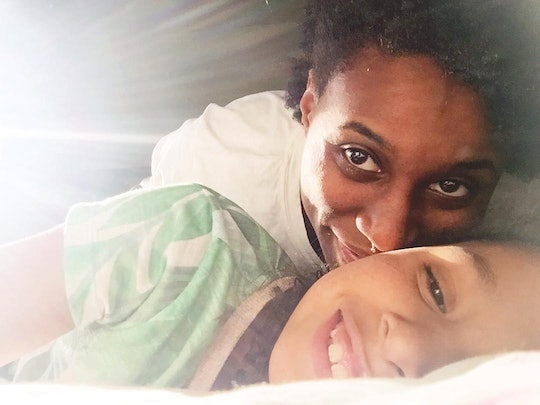 The Moment I Knew I Was Losing My Baby

I can remember so clearly the day I knew I was losing my baby. My partner and I had just had sex and I went to the bathroom, like I normally would, right after. That’s when I noticed the blood. I tried so hard to believe that it was from the rough sex, but I had the sense that my body was about to go through something very traumatizing. I climbed into bed and told my then-husband that I was “bleeding a little bit.” I paused, because I didn’t want to finish the sentence, because saying the words hanging on my tongue scared me too much. We were only first-time parents, still so new at this, but he reassured me “a little blood” was common, it was OK. I believed him, and then fell back to sleep. When I woke up, there more blood, and my heart shattered. I continued with the day, feeding our infant daughter, taking a walk, cleaning, acting as if nothing was happening.

I wasn’t ready to face letting go of my baby. I attempted to push it as far out of my mind as possible. Wrapping my mind around a miscarriage seemed impossible, and I wanted to be sure before I started mourning.

About a month earlier, my partner and I had a few friends over. My period was late, or so I thought. I couldn’t really tell since we had just had our daughter five months prior. My hormones were still all over the place. I was convinced that I’d missed my period because I was pregnant, so while everyone else was enjoying the party, I snuck off to the bathroom. I waited for the “not pregnant” to appear, but when I looked, there it was: Pregnant.

I walked out and straight into the room where Leif, my ex, and our friends were. “I’m pregnant again!” I told them, unable to keep it in, unable to wait until later, when we were alone.

Four weeks later, I sat in the bathroom, bleeding. I tried to stay positive, but I knew. I knew that my sweet baby, the one I’d first seen during an ultrasound a week earlier, was no longer with me. We went to a going away party later that night, though Leif said we didn’t have to, but I insisted. I wanted a few friends to meet our daughter Riley, and more than anything, I wanted to be distracted. I remember leaning against a wall outside at the party, someone holding Riley for me, while I stared off into space, looking at nothing and no one in particular. I don’t remember who it was, but they asked me how I was doing.

At first they didn’t understand, so I continued. “I’m having a miscarriage, that’s how I’m doing.” Then I walked away, not waiting for a reply, not wanting their condolences, not ready for the weight of anyone else’s pain when I couldn’t even carry my own.

The next morning, I went to my OB-GYN. I didn’t want to do an ultrasound, but I knew they had to do it. I lay there crying out on the inside, screaming. I’ve lost my baby, I wanted to shout. I don’t need to see my empty uterus. I don’t need proof my baby isn’t there. Yet still, a part of me held on to hope. I wanted to believe my baby was still inside. I tempted fate, looking at the screen as the wand crawled across my stomach. There was nothing. Just black. Where my baby had been a week before, there was blank space. I almost burst into tears, but I didn’t. I nodded while the nurse apologized, not wanting her to talk to me, not knowing how to tell her to leave. The staff made a comment about driving me to the hospital for my D&C, but I said I wanted to finish miscarrying at home. With my other baby.

The appointment ended, and I couldn’t get my pants buttoned fast enough to get out of there. Everything was blurry. But in seconds — or was it hours? — I was beyond the walls of the room.

I called Leif to tell him that he didn’t need to come home. Then I called his mother and then my own, and listened as they both reminded me that they loved me and told me stories of their own miscarriages. I was part of a club now. A club I never wanted to be part of. A club for women who lost their babies. A hole formed in me, one that had never existed before.

Slowly, I began telling people. The hole growing bigger and bigger with each comment I made, each “sorry” I swallowed. Their comments, both well-intentioned and insensitive, only made everything worse. Someone actually told me:

There was probably something wrong with the baby, so it’s better this way.

Another said, “At least you have Riley,” as if my loss has suddenly rendered me ungrateful for my perfect, sweet girl. Others said, “be thankful for what you have,” and I was, but I wanted my other baby. I wanted to tell him or her how much I loved them, how very much I wanted them, how I would wrap my arms around them and keep them safe from everything.

I didn’t cry. In fact, I never did. I don’t know how I moved through those days and the year that followed, but I did. Without tears. Our doctor said we wouldn’t be able to try again for another year, but it didn’t matter. Leif and I hadn’t been trying. I was grateful for the family I had, and I was thankful we were fine.

One month later, I did get pregnant again. And that’s when the tears came. I sat on the bathroom floor and let my body break. I let it feel everything. When Leif came home, I told him I didn’t want this baby, not because I didn’t, but because I was just going to lose it. The shock of a new pregnancy, and the terror of what might happen, allowed me to mourn the baby that I lost. I hurt all over, a pain that I’d never known or felt before. I dreaded carrying this baby. What if my body failed me? I felt like I was holding my breath the whole time.

But then our son was born. He was tiny. I had a c-section, and his blood sugar was low, so I didn’t get to see him right away. I panicked, because we had made it that far, and I just wanted to hold him. Soon enough, I did. He was so perfect. He never cried, but I did. Even now, every single time I see him, I’m so overwhelmed with appreciation that he’s here. He’s by my side since he was born; he holds my hands, and rubs my back any time he’s near. He holds my face, and looks me in the eye and tells me how much he loves me. He has promised never to leave me. Even though I’ve never told him, I think he knows. He knows that a part of my heart is forever missing, so he cradles it.

I believe he was sent specifically to us. He’s Riley’s “baby,” and he’s Leif’s mini-me. He’s healed my heart, and he takes care of us all.