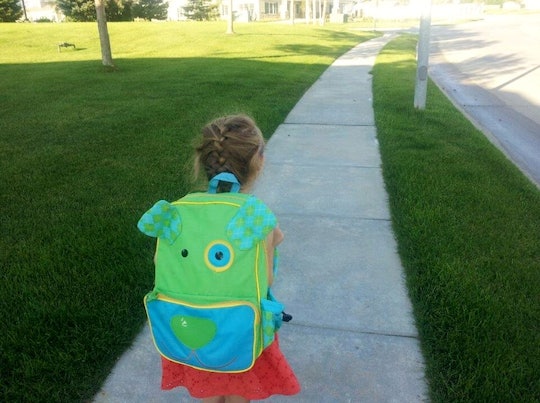 Actually, I Refuse To Drive My Kid To School

When my daughter started kindergarten, I thought driving her to school was an iconic and important part of parenting a school-aged child. I envisioned hugging her goodbye every morning and being the first person to greet her after school every afternoon. And it was like that... on the first day of school. Then school drop-off and pick-up turned into a damn nightmare, which is why, now that I have options, I refuse to drive my kids to school. Ever.

From the very beginning school drop-off and pick-up were just confusing, and try as I might I just couldn’t figure it out. The school sent home complicated instructions for where parents were supposed to arrive, park, and wait in orderly lines and according to our child's grade. We were not to exit our vehicles for any reason, and apparently we were supposed to glide in, slow down for a few brief moments while our kids jumped out of or into our slowly moving vehicles, and go on with our day.

It sounds orderly and organized on paper, and I am sure the person who designed the intricate process meant well, but like almost anything else related to parenting the reality of the entire situation did not mirror the expectation. Every morning was the same chaotic, stressful experience, filled with frustrated, angry parents laying on their horns and wishing they could get the entire ordeal over with already. I had to get my daughter out of her carseat every morning, too, so you can imagine how "happy" people were when I had to exit my car to unbuckle her.

School pick-up wasn't an improvement, either. To do things "right" you had to arrive well before the end of the school day... and I'm not talking minutes early, my friends. Some parents arrived an hour beforehand to make sure they could get through the gauntlet unscathed. An hour. Now, I don't blame them, and if I could have done the same I probably would have sat in my car and scrolled through social media, waiting for the bell to ring. But as a working parent I didn't have an hour to waste in the pick-up line, which meant timing my arrival perfectly and as my kid was walking out the door.

Immediately, I signed my kids up for the bus, and it was a life-changing decision that drastically altered everyone's morning and afternoon.

Defeated by the drop-off and pick-up line, I decided to try parking and walking my daughter to and from the school instead. Unfortunately, that wasn't what I would consider a favorable experience, either. In fact, it was actually scary. Not only were the other parents so intensely focused on drop-off and pick-up that they weren't on the lookout for pedestrians, but it sort of felt like walking into the lunchroom at middle school for the very first time. As the mom walking her kid to school I could feel all eyes on me, my hot-mess hair, and my probably stained and wrinkled clothes.

As you can imagine, taking my kids to and from school quickly became the two worst parts of my already chaotic day. Every morning and every afternoon was a nightmare rife with judgement and shaming from more experienced moms, especially when my daughter was having a rough morning and didn't want to go to school.

Now my morning routine is shorter, more streamlined, and no longer involves me having to wear a bra or spend time around other agitated parents.

As a work-at-home-mom, having to put on a bra and shoes to drive a few blocks to the school and engage in a complicated social dance (which I was never particularly good at and was always a major source of anxiety for this hot-mess mom) felt like a waste of time on everyone's part. Yes, my kids had to get to school, but was this really the way to go about it? For a while I thought it was; that it was a rite of passage and, if I didn't participate, I wasn't an engaged or involved enough mom.

So I endured two years of driving my kids to school, until our district started offering busing services to and from our neighborhood. I didn’t even have to think about it, and I didn't ask my husband for his input, either. Immediately, I signed my kids up for the bus, and it was a life-changing decision that drastically altered everyone's morning and afternoon.

I'm still responsible for our family's morning routine, which almost always consists of breakfast, brushing multiple sets of teeth, and spending at least 20 minutes trying to find my children's damn shoes. But once they head out the door to meet the bus, which conveniently stops in front of our house, I'm off the hook. Now my morning routine is shorter, more streamlined, and no longer involves me having to wear a bra or spend time around other agitated parents. My kids are at school on time every single day, and I don't have to leave the house.

That, my friends, is the dream.

Life is too short to spend hours in the drop-off and pick-up line, my friends.

Now, I’m not saying that having my kids ride the bus is always ideal. I am no longer in control of our departure time, and some days the bus driver is early or late. And if my kids don't make it out of the ouse on time, driving them to school automatically becomes my responsibility. I also flashed the bus driver during a braless sprint to the bus stop with my 5-year-old, so I can't say that relying on the bus has been totally problem-free. But hey, I'll deal with a rogue boob every once in a while if it means I don't have to sit in that damn drop-off and pick-up line every morning and every afternoon.

Do I feel a little guilty about not being able to handle school drop-off and pick-up? Sure. But not guilty enough to want to do it again. This works for my family, and if parenthood has taught me anything it's that you don't fix what isn't broken. Life is too short to spend hours in the drop-off and pick-up line, my friends.