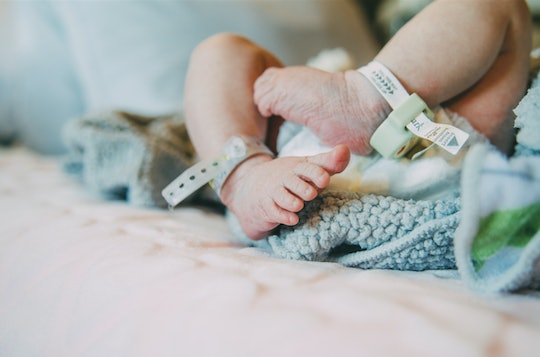 Actually, I Wish I'd Hired A Birth Photographer

When I was pregnant with my first child, someone asked me if I was aware that people were hiring birth photographers. An actual, professional photographer to have in the room with you while you give birth to snap photos of your baby coming out of your hoo-ha. I sighed smugly and rolled my eyes, promising that I would never hire a birth photographer. Ever. But, fast-forward seven years and, actually, I wish I'd hired a birth photographer.

At the time, there were a few things motivating my decision. Some factors would, even today, be considerations. Cost, for example, because a birth photographer can run hundreds, even thousands of dollars. Considering I was about to give birth to a mini-money pit, it felt a bit frivolous to spend that much money to chronicle the experience. Another, big factor was that I didn't want a lot of people in the room with me. The fewer the merrier, in my opinion. If it had been safe for me to go off into the forest and just pop out the kid I would have considered it. (It wasn't, so I didn't.) My one steadfast labor and delivery rule was as follows: "If you weren't there at conception and you don't have relevant medical experience you need to GTFO."

My other motivations, however, have not aged as well.

Even though I wanted delivery room photos, getting a professional involved felt over-the-top. I didn't need, like, frame-worthy photos. I just wanted an image or two of what my babies looked like "fresh-from-the-womb." My husband is a hobby photographer with a good camera. So I thought he would be enough. He could snap a few photos and we'd have them forever. No need to be fancy, right? Even now I don't think any delivery photographs had to be fancy, but I understand now that it was a lot to ask of my husband, who was pretty preoccupied without having to worry about getting a good shot.

He did, however, manage to snap this great shot of our son.

Obviously it's a bit more poetic without the censor bar there (but the internet never forgets and I want my son to talk to me when he's older, so censored he shall remain), but I love this picture. It captures so much of the moment. The energy I feel looking at this photo is the energy I felt in the room the moment he was born.

...while I haven't forgotten the big things, the passage of time has dulled some of the details. A photographer could have saved them.

There are a couple factors that allowed for this shot. Luck (so much depends on luck). The fact that my son was delivered via emergency C-section, so my doctor announced when they were ready to deliver and my husband knew exactly when to snap. Also the fact that I was lying down on the table and my husband wasn't occupied with, say, holding my leg or anything like that. He was just standing there. But I figured, second time around, he would get an equal stunning photo of our daughter.

It's a fine picture, I guess, but I don't feel the same visceral connection to it as I do the photo of my son. And I find that particularly sad because I was so proud of myself after my daughter's birth— a vaginal delivery after a previous C-section. But in this photo I can't really see her face, the lighting is weird, and it's kind of blurry. It doesn't capture the mood of the room at all. And I don't blame my husband for this, either. After all, he was busier during her birth, his angle wasn't as good, and he didn't know exactly on which push she was going to emerge. On top of that, my daughter needed to be whisked to the side for immediate care after birth, so he didn't have as much time to snap photos. But I feel like if I'd had a birth photographer in the room they could have been better prepared, better experienced, and better positioned.

A professional also could have snapped pictures of me and my husband. One exists. It was taken by a nurse after my son was born and I was already getting "put back together." But there are no images of my husband supporting me in labor, or his face when he saw our children. I would treasure pictures like that.

I look at pictures of women giving birth and I am in awe of them.

I also regret that there are no pictures of me in labor. At the time this was a conscious decision. "Don't you dare take pictures of me! I'm going to look like a sweaty, pooping, swamp hag. No one needs to keep those images forever." It also felt vain and self-centered. "La-dee-da! Look at me! I'm such a princess I need pictures of me during birth!" But why did that feel vain? Why is it self-centered to want a picture of your powerful-ass self bringing new life into the world? There are countless pictures of women objectified in order to sell us soda and no one bats and eye, but pictures of women, taken by and for women, to be reminded of a monumental life event is vain? WHAT?!

I look at pictures of women giving birth and I am in awe of them. I'm inspired by their strength and I see such beauty in their contorted, intense, excited, tired, agonized faces. I see so much of my experiences in them... but have none of my actual experience. I would love to have images like that, to remind myself of my own deliveries and my own power.

I also thought birth photography was basically pointless. I mean, how could one possibly forget what birth was like? During pregnancy, I was so in my own body that the idea of that feeling ever fading seemed preposterous. There was just no way I would ever not feel physically connected to that experience. And if I ever start to sort of forget, isn't the baby a good enough reminder? But, as it turns out, while I haven't forgotten the big things, the passage of time has dulled some of the details. A photographer could have saved them. They might even have stolen a few images of moments I didn't realize were happening at the time, but could look back on and recognize as important.

My last, and probably most personally compelling reason for not even considering a birth photographer is by far the stupidest: I thought I was too cool for it. I was so determined when I was pregnant that I wasn't going to be "that pregnant woman." The one who became singularly focused on her pregnancy and, later, her child. The one who stopped having an identity of her own outside of motherhood. I wasn't going to be like a regular mom, I was going to be a cool mom, you guys. The end result? I denied myself the opportunity to capture the moment I became a mother at all, cool or otherwise. I downplayed just how powerful birth was and how it would affect the rest of my life.

So, if I had it to do over again, I would at least consider it. Because thinking back on on my birth is beautiful and empowering, but I think being able to look back on it would be pretty special.