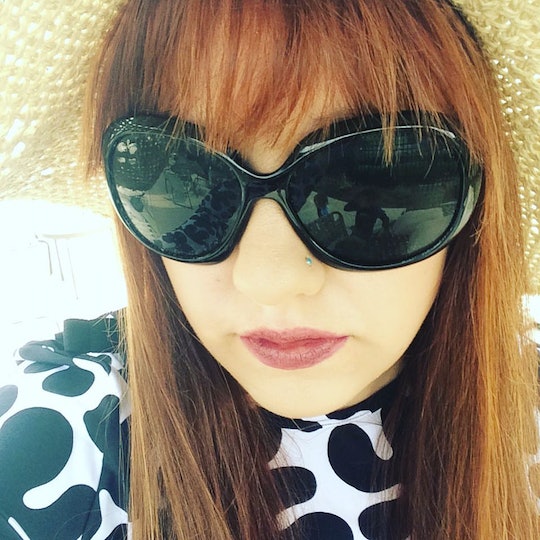 Everyone says your breasts get worse when you breastfeed. That they start to sag, that they get stretch marks, that your nipples suddenly point downwards, that they look absolutely nothing like they did before — before your baby, or babies, "ruined" them. Before I had a baby, I made my husband swear that he’d pay for a boob job if mine fell down from babies. I was terrified about what breastfeeding, in particular, would do to my chest. When I pictured breastfeeding, I pictured braless hippies with all the sag that comes with it. I was worried. I had finally accepted my girls as normal, and I didn’t want to ruin it. But I needn't have worried. Instead, my boobs look better after breastfeeding.

I've always hated my breasts. I come from a family of large-breasted women, women whose boobs lead into every hug and every room. In college, I maintained the deluded idea that I was a B-cup (I was more like a D) for some reason and wore bras accordingly. They never fit, but I didn’t know better. In graduate school, I finally accepted I wasn’t a dainty little B-cup flower, but I didn’t want to flaunt DDs. So I wore wire sports bras all the time. My husband says he had no idea what I was rocking until I took my shirt off at the river, revealing a bikini top.

After that, I slowly started wearing correctly-sized bras. I weighed 120 pounds and rocked DDs. Perky, stand-up, gorgeous DDs. I began to love my breasts. They were awesome and had no genetic risk of cancer. What more can a girl ask for? Except babies. I wanted babies. And babies, to me, meant giving up those awesome boobs.

At 12 weeks pregnant, I found my first stretch mark on my breasts, an angry red line running up from my nipple. I freaked out. I got laughed at, because, as one female relative told me, “Everyone has stretch marks. You should be glad you only have one.” That, and subsequent pregnancies, marked my breasts. I have stretch marks all over my boobs now. But I’m also one of the palest people on the planet — I even once won a pale-ass contest in college.

At this point I know that what my boobs look like now is what they'll look like until old age claims them. And they are fabulous.

Even though stretch marks turn white, mine are invisible, which is good, because I got a lot of them. Once I started breastfeeding, my boobs swelled. First, they went up to an E cup. Then, when I started tandem breastfeeding my toddler and baby at the same time, my breasts swelled to an unbelievable HH cup. I didn’t even know the bra alphabet went that high. They were massive; the size of my head. Then, and even now, I have to order my bras on the internet, especially because I have a small band size, and they pretty much cost a firstborn child to order in a specialty size like that.

When I first had a baby, I hid my breasts in breastfeeding sports bras. But then I discovered Hot Milk, the specialty nursing bra company. They went high enough in the alphabet for me to wear, and looked cute, too — no drab, nude-colored boringness. I wore black and pink and purple bras my size, all with nice little clips to let my breasts down easily when I needed to feed my sons.

When I can find that magic garment that fits breast and body, it’s magic. My breasts look spectacular.

After feeding and sustaining three sons on DDs, I’m pretty much done breastfeeding these days. I only breastfeed once a day, at night, to get my youngest son to sleep. He’s 2-and-half years old, so our breastfeeding journey is almost over. At this point I know that what my boobs look like now is what they'll look like until old age claims them. And they are fabulous. No, they aren’t as perky as before, because they’re so big the weight pulls them down. Because they’re so large, I have trouble finding clothes that fit: if it fits my chest, it’s super baggy in torso. I can’t wear any of those cute backless dresses because to go without a bra would be to practically give myself a black eye. But when I can find that magic garment that fits breast and body, it’s magic. My breasts look spectacular.

Breastfeeding has done nothing but make my boobs look better than before. They’re much bigger, and I like them that way. So does my husband. I don’t need a boob lift now. If anything, I need a breast reduction. And I’m never, ever getting one of those.