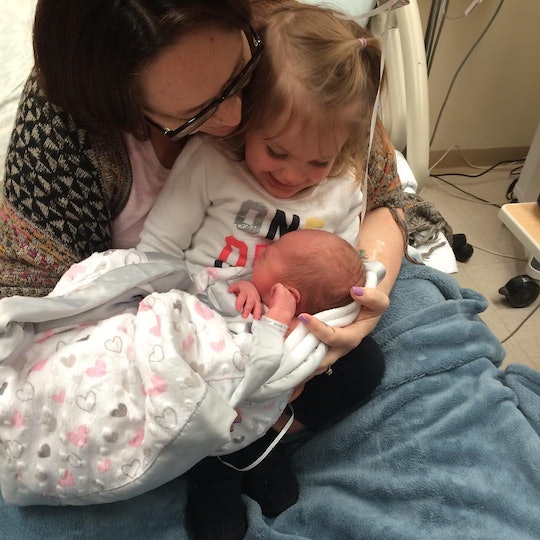 Courtesy of Stephanie BC

I gave birth to my youngest daughter just about two months ago, and ever since her arrival, I've been tandem breastfeeding my toddler and my newborn. For the most part, I hate it. It often feels like the second I'm done breastfeeding my baby to sleep, my 3 year old is ready for her turn. Just yesterday, my mother-in-law asked me if I ever felt like a cow, and normally I would probably give someone some hefty side-eye for a question like that, but the truth is that on many days I feel like the damn dairy queen, open 24/7, a never-ending assembly line of breast milk. I'm constantly breastfeeding one and telling the other to “take a number!” There have been times when I’ve literally told my 3 year old that mommy's boobs are out of order. But I ultimately always give in and let her climb into my lap.

Before I had my second child, I always envied other mothers who got to tandem feed their children. Their beautiful pictures would occasionally trickle into my newsfeed or I'd see them on social media and I'd sigh, hoping that one day I'd get the chance to breastfeed my children together. I would read about all of the benefits of tandem breastfeeding or how their children were now “milk buddies,” and as a serious breastfeeding advocate, I longed for that experience too. But now that I have it, I'm not so sure how I feel anymore.

When I found out I was pregnant with our second, I hoped that my oldest would breastfeed long enough for her to have a "milk buddy" experience with her younger sibling. There was a short period during the pregnancy that I thought she was weaning, but she kept right on, and the closer I got to the delivery it seemed the more she needed me in that way. I even let her breastfeed during my labor because I knew it would speed things along.

The day after giving birth, my friend brought my oldest to the hospital to meet her new sister and the first thing she did was crawl up on to the bed and ask for boobs.

My second daughter latched shortly after being delivered, just as I'd hoped. I felt like I was was a pro by then, and even the nurses commented on how I could probably teach them a few things. The day after giving birth, my friend brought my oldest to the hospital to meet her new sister and the first thing she did was crawl up on to the bed and ask for boobs. I was relieved because it had been 24 hours since she last breastfed from me, the longest break in her short life, and I wondered if she would still want to. I let my husband take the baby and let my big girl come home to me.

These days, I sometimes find myself irritable, impatient, and even annoyed when my kids wants to feed. Even when they're feeding, I feel like they're taking too long and I wonder if they even really need it anymore. Sometimes just the thought of them sucking on my nipples one more time can be tantamount to hearing nails scratch on a chalkboard. Even though I'd always known what nursing aversion was, I didn't think I'd ever experience it. But a few days after we brought the baby home and we were all trying to adjust to being a family of four, nursing aversion hit me full force and with the weight of a ton of bricks.

Many times in those first few days I cried when I thought about how much time I now had to spend breastfeeding the baby and not with my 3-year-old toddler.

Breastfeeding my oldest used to feel like coming home. We could both rest and relax during our time together. I'd feel so much peace and I know she would too. It got us through everything together: growing, teething, sickness, and temper tantrums. She could find solace in her mom's arms and I found peace knowing I was giving her everything she needed. Now, breastfeeding both her and her baby sister — all I feel is overwhelmed.

It’s been two months since we brought the baby home and my 3 year old is showing no signs of giving up breastfeeding any time soon.

After we got home from the hospital, I was exhausted from my 49-hour, unmedicated labor and delivery. I'd had only six hours of sleep in a few days' span. I just wanted to sleep, and it seemed like all the kids wanted to do was breastfeed. My oldest clung to me even more than before and I felt horrible because I knew that she now had to share me. I felt so much guilt because I knew our bond would forever be different. Many times in those first few days I cried when I thought about how much time I now had to spend breastfeeding the baby and not with my 3-year-old toddler. I wouldn’t have gotten through it without my husband being there to reassure me and to entertain her as I breastfed her sister through her newborn growth spurts.

It’s been two months since we brought the baby home and my 3 year old is showing no signs of giving up breastfeeding any time soon. I think she wants me just as much as the infant does. I know extended breastfeeding is normal for toddlers, and I try to remind myself of that at least 20 times a day. I can’t control the initial frustrations I feel whenever both kids want to breastfeed at the same time or concurrently, but I can usually talk myself off of the ledge long enough to remind myself that what I am doing is an act of love.

I know I could wean my oldest if I wanted to and there would be no judgment from anyone. Honestly, I'd probably get judged less for weaning her than I already am for still nursing her. People have made comments about our breastfeeding relationship, suggesting that that I'll be "breastfeeding her till college." It doesn't doesn’t bother me, largely because I know I won’t be. From the get-go I committed to breastfeeding my toddler as long as she wanted to, and I'm now committed to doing just that for both of my children. I don’t think taking the one thing that brings her comfort and a sense of normalcy during so much change and transition would be the smartest thing to do right now.

So in the mean time, I might complain about it and joke about how I hate it, and it’s my right to do so, but I know that I'll always put my kids' needs above my own. But I reserve the right to put up an “out of order” sign on my chest whenever I need a sanity break.