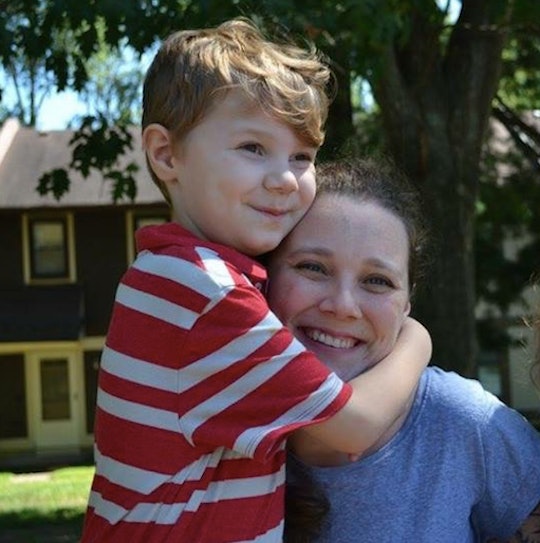 Why I Loved Breastfeeding My 4 Year Old

Just read any article where a mom ‘fesses up to breastfeeding past infancy and you’ll see the nasty comments roll in. Even though I know many moms who have continued to breastfeed past their child’s first birthday, I unfortunately don't know many women who are proudly “out” about it. But I am. I loved breastfeeding my 4 year old. I don’t need feel the need to justify my decision to continue to nurse a kid who is potty-trained and goes to preschool and has a full set of teeth and no longer fits neatly in my lap to other women who are also extended breastfeeding. Yet I know many people still judged my decision to do so. And yes, I call it a “decision,” but it really was one of the biggest non-decisions I’ve ever made.

First of all, my son hated solid food. I, very diligently, like any “crunchy” mom, bought the perfect first foods. I got the organic banana and an avocado. I pureed them. I added in some pumped breastmilk (still warm from the tap), and loaded it up onto my BPA-free spoon. And once the food touched his lips, he hated it. He gagged. He made awful faces. He stopped opening his mouth.

Then I learned of an even crunchier approach to infant feeding: baby-led weaning, which involves putting food in front of them and just letting them play and explore and eventually put it in their mouth and gnaw and swallow. This is the way Mother Nature intended it. I’m all for less fuss. Sure, the trays I bought to freeze my homemade purees would go to waste, but my kid was going to eat food on his own terms and learn to eat what the rest of the family was eating.

Thing is, he really didn’t care for trying food. Not for months. He was a giant baby. He had gotten tall and fat on my milk alone. He was in no rush for anything more.

His first solid food was, believe it or not, a burrito from Chipotle. He was 10 months old. When that first birthday came around, he was still nursing for what I would guess would be about three-quarters of his calories. I mean, the kid passed up birthday cake in favor of the breast.

He was healthy. And thriving. So I saw no reason to stop.

I admit, a good portion of my non-decision to practice full-term breastfeeding was laziness. Since he was born and I navigated all the parenting decisions that everyone faces, I always chose the easiest. We co-slept so I could roll over and feed him without waking up. I wore him in wraps and carriers because I had no interest in fussing with strollers or lugging his car seat around. (Plus he hated not being held.) I let him fall asleep at the breast, because, well, keeping him awake while nursing at night was impossible. And any mom knows that a quick bedtime equals a happier mom.

So I’m saying it here: I was too lazy to wean. I would much rather pop out a breast and feed him when he needed a snack or a drink or reassurance or affection or a nap than have him ask and me say, “no.” The times when I did say “no” weren’t fun. Somewhere after his second birthday, I started introducing some more restrictions. I didn’t like nursing him in public. Not when I was busy doing something else. But you have to choose your battles with your kids. So if he wanted to nurse, I often said yes.

It helped both of us slow down. When he was upset, or afraid, or frustrated, or wanted reassurance for any reason, nursing was there for him. It was a great re-set button. He’d climb into my lap. I’d take a break from dishes or laundry or writing. We’d read a story, or I’d talk to him and stroke his blond curls. We took these little breaks together and connected.

His need for connection, reassurance, and love didn’t magically disappear when he turned 2 or when he grew molars. He could now ask, quite eloquently to “wanna nurse.”

Before he turned 3, his little sister was born. And nursing them together made it possible for me to rest and doze. He wasn’t jealous of his little sister because he still had this sacred time with me. And sharing the time with his sister seemed to create a great affection between the two of them.

Then he started going to preschool. We were around each other less. He had given up napping. But still, at bedtime, or in the lull of the afternoon, we could still come together and connect. It was casual. He would nurse a little, pop off and talk about his day, and then snuggle back up. He wasn’t ready to wean. He could have. I know he could have, but he treasured his nursing time more than ever. He could go out into the world confident that he could always come back home. And curled up at my breast was as at home as he could feel.

I’m not saying it’s always blissful. There are moments of embarrassment when you’re talking to someone and your kid comes up and kisses your breast and says:

I love your breast.

And I know, the naysayers out there are probably going to say I’m raising a boob-obsessed boy. But my kid knows what breasts are for. And someday, if he does find them sexually interesting, he’ll still know their true purpose.

Speaking of someday being a sexual being, my son has learned important lessons about consent. We only nursed if both of us wanted to do it. He knew that my breasts were part of my body, and as much as they somewhat seem to belong to him (or at least the milk in them), he knew they were part of me, and if I didn’t want them to be touched, or exposed, he learned to respect that.

Once he turned 4, he was really only nursing before bed. He no longer fell asleep at the breast. he just needed a minute or two of snuggles and reassurance and milk and then he’d roll over and start snoring.

And there were times I was so thankful for his nursing. When he was 4-and-half, he got a nasty stomach bug and couldn’t keep anything down. Except for breast milk. I never had to worry about dehydration. When he needed shots or blood tests, nursing kept him calm. It was the strongest tool I had in my mothering toolbox.

At one point, he was away from me for a couple bedtimes in a row, and I pointed out he hadn’t nursed in a few days. We talked about it. We talked about how he didn’t need it any more. We both decided that we were ready to wean. We had a party. He got a weaning feast where I made all of his favorite foods and he could pick out any kind of cake he wanted.

I was so happy to be done. His sister was still nursing a lot, and I knew this meant overnights without me would be easier. It would give him a chance to be closer to my partner, who, as the non-breastfeeding parent, sometimes felt second-string. But it was still bittersweet. It’s a huge milestone and the longer he held onto nursing, the more memories I had of his sweet face looking up at me, even though the face was no longer a baby’s or a toddler’s.

Critics of extended or “full-term” breastfeeding surely say something about the mother being selfish. This is so far from the truth. It was a personal choice, and one that I would never force another mother to make or feel guilty for not making. The biggest benefits I got out of nursing him for so long were in seeing how safe and nurtured my kid felt. That was all that ever mattered to me.