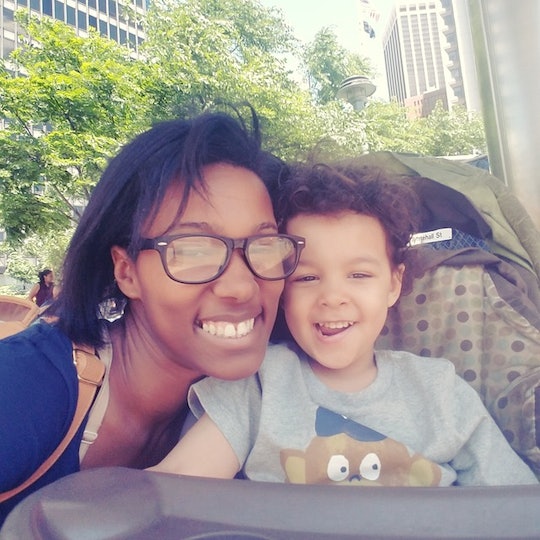 TBH, Lazy Parenting Is The Best Thing For My Kid

“Mommy! Let's go down the slide!” my son calls to me from the jungle gym. I am sitting on the hard wooden bench watching my son run up the steps to the slide. It's not exactly comfortable, but I also have no desire to drag myself up and down the jungle gym over and over again. I shake my head and remind him that I didn't come to play and that I could see him better from where I was sitting. From the outside it probably looks like I'm being a neglectful parent, but I'm not; I'm being lazy mom.

Now, before you get on my case for admitting that I'm a lazy parent, it's a real thing. Granted, I've been doing it long before I found out that it was a “thing.” I just did it because I was tired of hovering.

My son is 3 years old. He's developed enough of the necessary skills for me to be able to step back and let him interact with the world. So if he asks, I may play with him as much as he lets me (he's ridiculously particular, and bossy as all get out), but most of the time I leave him alone. That's the biggest thing about “lazy” parenting, we're not ignoring our children to the point of recklessness, but we are doing it enough to force them to think and act for themselves. My son has always been creative, and me stepping back and watching him play has allowed him to blossom.

When he was younger, I'd sit on the floor with him while he played far more often. I'd suggest toys to play with, or try to engage with him and use every second as some sort of teaching moment.: Let's read a book! Where's the blue ring? Which comes next? I'd talk to him incessantly. He couldn't really talk back yet, but if he could, he probably would've told me to back off. I felt compelled to give him all of my attention, but what I noticed when I disengaged was far more telling.

When I stepped back and left him alone, he was forced to make his own fun. He'd move from activity to activity organically, without my suggestions. He could turn anything into a toy. Without me there to guide him, he was fine.

If you ask him and he's willing to explain, he'll spin an elaborate tale about how all the trains are going on an adventure, or working together to solve a problem and make themselves “really useful.” The best part of all? He does it entirely without me.

Around his second birthday, he really started getting into trains. He loves all kinds of trains, but his favorites are the trains from Thomas & Friends, and I think it's because they're good to use in a myriad of ways. They're incredibly interactive — the films and television show naturally lend themselves to a whole new world of exploration — so sometimes he'll mimic the scenes he sees on TV. But more often than not, he puts them into completely different situations. I hear him running them around the room, turning any piece of available furniture into a bridge or tunnel. He creates these elaborate setups with the trains themselves, mixing and matching their tenders and and coaches to create these intense super trains.

Sometimes I sit and watch him when he's deeply involved in his games and not paying attention to what's going on around him. I am awed by what he comes up with. The floor is covered with trains facing in several different directions. It looks like chaos, but it's all very deliberate. He'll notice if one train is moved out of place (I accidentally kicked one once and I was in big trouble) because they each serve a very specific purpose to the story. If you ask him and he's willing to explain, he'll spin an elaborate tale about how all the trains are going on an adventure, or working together to solve a problem and make themselves “really useful.” The best part of all? He does it entirely without me.

Letting my son play alone is great because I can get things done without him constantly wanting my attention. Sometimes it's checking emails, sometimes I can read a book, and rarely, I can even go to the bathroom in peace. But it goes deeper than that.

Free play like this is a lazy parent's best friend. As much as I love my kid, playing with him gets boring really quick. Sitting on the floor for more than 10 minutes is uncomfortable, usually because he forces me to sit in the smallest available spot. I'll go along with it sometimes, like when he begged me to sit with him in his Thomas the Tank Engine tent that he barely fits in in by himself, but I was over it real quick. Not only does he keep himself entertained, which is a blessing in and of itself, but as he gets older I am less likely to hear, “Mom, I'm bored,” every five minutes.

Letting my son play alone is great because I can get things done without him constantly wanting my attention. Sometimes it's checking emails, sometimes I can read a book, and rarely, I can even go to the bathroom in peace. But it goes deeper than that; the American Association of Pediatrics says that children allowed to free play are less likely to develop anxiety and depression and may not suffer from stress. If me parking my butt on a playground bench and forcing him to play alone will save him from these things when he's older, obviously I'm going to sit on the bench — no questions asked.

I know that when we're outside and I'm checking the news on my phone other parents are judging me. But my kid is often the most outgoing, social, and independent kid on the playground. He is fearless and has no trouble making his own fun. He doesn't depend on me to do anything but help him get his snack out of his bag. So, go ahead and call me lazy; I really don't mind.