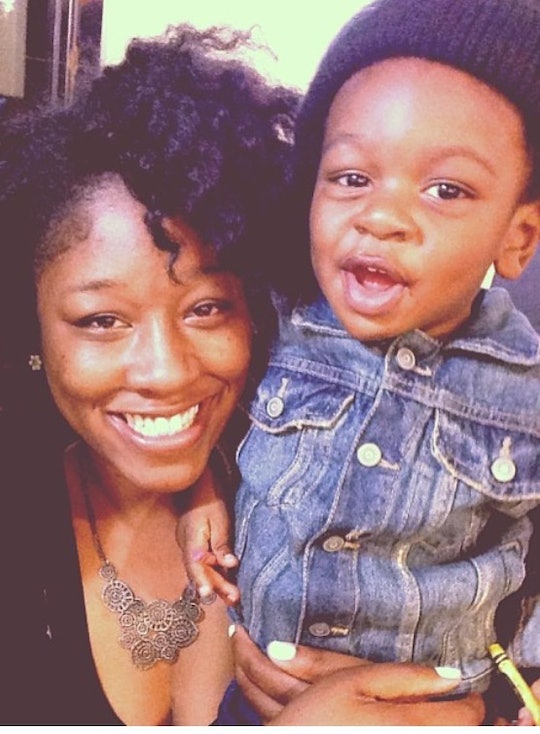 It’s Friday night, right before I throw myself into my bed, and I’m going through the motions of my night-time routine: washing my face, brushing my teeth, tying up my hair, and setting up my son’s tablet to charge overnight. Every morning, no matter what, my 3 year old wakes up around 6 a.m., bright eyed and ready to play. But, here’s the thing: I'm a self-professed and proud lazy mom, and waking up at 6 a.m. on a Sunday morning is simply unpleasant for everyone involved. So, I charge my son’s tablet before I go to bed so that I have a guaranteed hour-and-half of extra sleep while he watches his cartoons quietly next to me. Yeah — I'm a lazy mom. And no, I don’t feel guilty about it. My child is happy, and so am I.

When I became a mom, like many other first-time moms, I spent the first year of my son's life hovering over him and worrying about every single cough, yawn, and breath. I woke up at the crack of dawn with him to cook a full-course breakfast and sleepily play with Legos. I stayed awake during his nap times to clean the dishes, fold the laundry, and blend my own homemade baby food. Motherhood became this endless cycle of constant sleepiness and irritation. I found myself getting up earlier and earlier every morning, almost resenting the time I spent with him because I felt lost in the idea of the mom I thought I was supposed to be. It was as if, at least in my mind, there was a camera on me at all times and if I didn’t give my absolute all in every moment, I'd be unfit as a parent. Instead of these expectations making me into Mother of the Year, they made me feel like a terrible mom, and I wasn't proud of that. I was angry on the weekends, yelling and infuriated with my partner because I felt like I was losing my mind and sense of self. Eventually, it came to head when I realized I'm the only one in control of the type of mother I'm going to be.

I don't have to resent motherhood and, on the flip side, I'm not a failure if I let my kid eat PB&J sandwiches for dinner. Coming to terms with the fact that I'm a lazy mom and I love it has not only saved my parenting — it's saved me, too.

Now that my son is almost 4, I've shifted into complete lazy-mom mode. My relationship with my son and the way I approach motherhood has absolutely transformed. On Saturday mornings when my son wakes up at 6 a.m., I hand over the tablet and I doze back off while he sits at the foot of my bed. When I wake up an hour later, I feel like a human and like I can function instead of freaking out at every little thing he does. During the week, when I am damn exhausted from working and don’t feel like cooking a dinner he’s not going to eat anyway, I whip up a peanut butter sandwich and call it a night. He absolutely loves peanut butter sandwiches.

While sacrifice and selflessness are major pillars of parenthood, total annihilation of my self-care is optional.

On weekends, I take him with me on my coffee run and grab a strawberry-frosted donut for him with sprinkles and call that breakfast. I allow him to pick out his own clothes and dress himself because I don't want to spend the extra 10 minutes in the morning doing it. This past weekend, I took him to our local park and plopped my behind on the shadiest patch of grass as he ran back and forth for three solid hours.

Dropping my son off at his grandmother's house one day, she said, "You let him get away with whatever he wants. You have to be more stern and have more structure." A few years ago, a comment like that would've punched me right in the gut. I would've run home, scoured threads looking for what other women were doing with their toddlers, ruthlessly compared myself to them, and allowed the bitterness to rise in me uncontrollably. Now when she slips in these kind little remarks in on my parenting, I laugh and say, "If it won't kill him and we're happy, everything is fine." Because it is.

Nothing about our lives has been complicated or made easier because I choose to take a laid-back approach to raising a child.

Throughout my pregnancy, women shared with me their experiences in motherhood and I got this sense that motherhood was completely about sacrifice and trading in who I was for the opportunity to raise a little human. From rest to intimacy to taking a poop with the door closed, it felt clear to me that sacrificing everything in the process of raising a child was a part of being a good mom. While sacrifice and selflessness are major pillars of parenthood, total annihilation of my self-care is optional. I tried forcing myself into that the first year or so and I did not like the mom or woman I became. So I gave it up. And my son and I are both better off because of that.

Being a lazy mom isn't about a lack of caring for my son, and "lazy parenting" isn't going to work for every parent. For me, being a lazy mom is about giving my child the space to be a kid, to find independence, and to explore the world around him. And it's also about giving myself the chance to care for my son without losing the ability to care for myself. I am the mom who buys prepackaged oatmeal for my son’s lunch box instead serving him farm fresh eggs and whole wheat toast. But I do set parameters on my lazy parenting that are non-negotiable. Even though my parenting is "lazy," my son still has the manners, knowledge, and know how of any other 3 year old. And even if I serve him pre-packaged food and let him pick out his own clothes, I'm still up until 12 a.m. in order to pack his lunches and iron his itty-bitty shorts for the next school day. The only difference is that I still have and value my sanity. Nothing about our lives has been complicated or made easier because I choose to take a laid-back approach to raising a child.

As a matter of fact, my son is just fine. So am I.