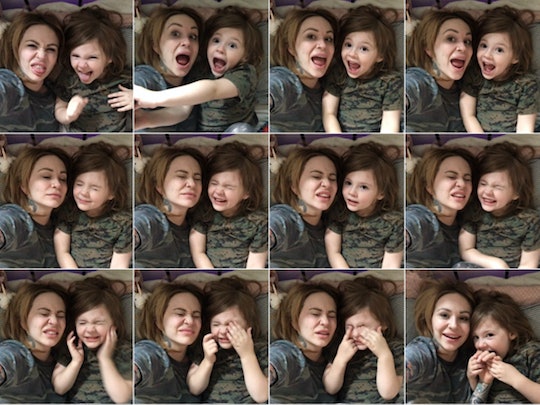 As a mother, a long-time adult entertainer, and someone who does watch pornography, I've thought about this a lot, and here's my plan.

Understanding why millions of Americans watch other chefs make omelettes on the Food Network only makes sense once you know what an omelette is. And it's the same with sex. You need to give your kid a basic understanding of sexuality before you can dive off into the many flavors of sexuality that adults like to throw into the skillet.

Do It Before They Begin Puberty

Dr. Rosalyn Dischiavo runs the Institute for Sexual Education & Enlightenment based out of Connecticut, which certifies people to become licensed educators or sex therapists with the American Association of Sexuality Educators, Counselors and Therapists. She holds a master of arts in marriage and family therapy and a doctorate of education in human sexuality, and teaching people how to talk about sex is her bread and butter. "Firstly, when you talk to your kids about sex, there are two things you don't want to do: you don't want to say that sex is between a man and a woman, because that's obviously not always the case," she tells Romper. "Second, you don't want to say, ‘when two people are in love… ,’ because that's also not always the case.”

When you talk about sex, don’t lie about things because you feel squeamish. Where does the penis go? Well, sometimes it goes in a vagina, sometimes it goes in a mouth, sometimes it goes in a butt or between fingers or toes; there are lots of ways to share touch. While I’m not suggesting that you give your kid a rundown of kinks and fetishes, let them know that adults use their bodies in various ways to feel good. But please, don’t lie. Children will eventually figure out if you lied to them, and then their trust in you will diminish.

Dr. Dischiavo explains further, “If, as a parent, it is your value that your child be in love when they have sex, you need to explain that. You can say that, ‘It’s my experience that sex with love is much better,’ or ‘It’s our family’s belief that sex should only happen with love,’ rather than making it sound like sex only happens when people are in love. If you frame sex as an act of love you are making your kids more vulnerable to sexual manipulation, and to lying to themselves about their partner’s feelings or their own feelings.” The danger of linking sex and love as synonymous is that it can lead kids to coerce each other with the argument that sex is how you show someone that you love them. This is a common coercion tactic used by people of all ages.

Be Honest About The Mechanics

I have found that nature documentaries are a great way to introduce kids to the birds and the bees and the penises and the trees. It was a great comfort to me as a kid to learn that human mammals aren’t the only mammals that engage in flirting, wooing and coitus.

My 5-year-old daughter doesn’t watch much television, but I found myself sitting next to her while David Attenborough narrated the mating ritual of elephants in the African Serengeti. The male elephant mounted the female elephant, his penis dangling like a firehose. My daughter fixated on this, as most of us would, “What does mate mean?” I saw it as an opportunity to inform her little mind, and seized it.

“Mating is when animals have sex, so that they can have a baby elephant," I told her. My daughter knows what a penis is, because we have a male dog and she’s seen him urinating or licking himself. And so, I went on, “The male elephant is putting his penis inside of the female elephant’s vagina, so that he can put seeds in her. If one of the seeds gets nourished it grows into a baby elephant. This is how your daddy and I made you.” I waited. She was processing. I decided to add the finishing touch, “Your daddy put his penis in my vagina, and planted a seed and you grew from that.” Pause. She giggled and burst into laughter, “That’s silly!”

This was several months ago, and nothing remarkable has changed in her play or behavior. I didn’t traumatize my five year old by giving her simple, truthful information, because I didn’t attach any shame or stigma to the subject matter. She’s not obsessed with drawing penises, she’s not making her toys hump each other (although, like most kids, that play will come later), and most importantly, she doesn’t feel any shame about her body parts.

The first step to explaining pornography to your kids is to explain sex to them, shame-free, in the first place.

First, Define It For Yourself

"As a feminist pornographer of over a decade, I view pornography as another artistic medium. When you are able to talk with your child early on about sex and bodies, then the conversation of pornography is a less difficult one.”

Really, let people have and express their interests, whatever they may be.

Then, Define It For Them

Now that you’ve built a healthy framework for understanding the natural activities that most humans eventually engage in, we can talk about documenting sex as videos, written erotica, or photos. It is no surprise that porn exists in our modern world, because humans love to document and record all aspects of our humanity. On YouTube alone, every aspect of life is posted for viewing consumption: you can find videos of people eating, people vomiting, people exercising, people fighting, people defecating and urinating, people giving birth, people dying, people being born. Of course people record themselves having sex. And sometimes, people get paid to record these activities. Consent is also a part of this bundle, and we'll get to it a little later.

If Asked, Explain The Money

If your kid has questions about why people have sex for money, you can remind them that America isn’t based on a barter system. Without trying to explain the nuances of capitalism to your child, tell them this: people trade goods and services for money, and sometimes, people have sex in order to get paid. Some people grow food to get paid. Some people clean toilets to get paid. Some people play sports to make a living. Adults engage in lots of different kinds of activities for fun and for money, and porn is one industry of many. Frame this conversation simply and without bias. Most people in the adult industry work without coercion, and if you label them as victims you’re repudiating their own choice. Don’t do that.

When do you tell them this? Well, when they ask, “Why would somebody have sex for money?” You can tell them, “Because people do lots of things for money, because money is how you pay for a place to live and for food to eat.” My daughter is 5, and while she doesn’t know what capitalism means, she knows that Mommy dances and tells jokes to people in her underwear for money so that Mommy can buy her food and take her on fun trips.

A Note About Exploitation

There are lots of resources available for talking to your kids about sex, Dr. Dischiavo recommends that you read Everything you Never Wanted Your Kids to Know About Sex (But Were Afraid They’d Ask) by Richardson & Schuster, and Sex Without Shame, Encouraging the Child’s Healthy Sexual Development by Alayne Yates. You can give your child or pre-teen It’s Perfectly Normal by Harris & Emberly and A Kid’s First Book About Sex by Blank and Quackenbush. The last two books can be left in your kid's bedroom for independent perusal. And online, Scarleteen is a great resource for teens and adults.