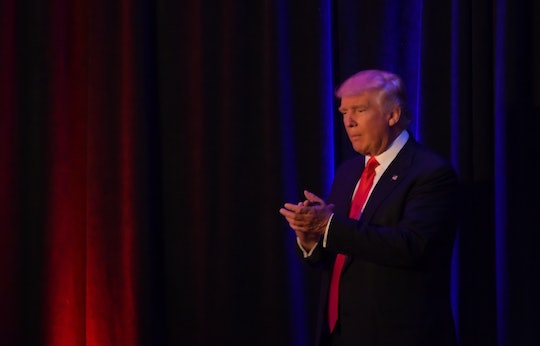 Actually, Trump's Presidency Will Make It Easier For Me To Teach My Son Bodily Autonomy

Like a number of people across the country, I started the day after election night feeling disheartened, saddened, and at what can only be described as a total loss. What I had hoped to be a dream was real: Republican presidential candidate Donald Trump secured the necessary electoral votes to win the presidential election, making him the President-elect of the Untied States of America. As a palpable sense of fear threatened to keep me in bed, I realized that a Trump presidency will make it easier for me to teach my son bodily autonomy; a necessary lesson that, at first glance, would seem somewhat impossible now that the majority of the country has chosen Trump and Vice President-elect Mike Pence to lead this country.

Initially, I focused on the comments Trump has made regarding abortion and reproductive rights. I could almost hear our soon-to-be president's voice in my head as he told MSNBC's Chris Matthews in March that there should be "some form of punishment" for women who choose to have an abortion; a memory that sent shivers down my spine and evoked a fear that I haven't felt since Congress voted to defund Planned Parenthood on June 7 of this year.

Currently, I have the ability to explain to my son that women have the right to make their own decisions about their own bodies, as it's currently a right upheld by the United States Constitution and the Supreme Court. It's also a legally protected right I've used myself, as a 23-year-old recent graduate facing an unwanted pregnancy and an unhealthy relationship. That ability makes it much easier to point to tangible, concrete, and legislated evidence that women are complete human beings who have undeniable ownership over their person and are capable of making choices with regards to sex, reproduction, and family planning. I can share my abortion story with my son, pointing to the footnote that says I was within my constitutional right to do so. I won't have to whisper about a back alley or a coat hanger or an illegal procedure I was lucky enough to procure from a doctor willing to put their medical license, as well as their life, on the line.

As the reality of the election results continue to set in, I'm realizing that a potentially efficient and successful attack on reproductive rights will not make it more difficult for me to teach my son about the importance of bodily autonomy for all. In fact, it might just make it easier.

However, as Trump prepares to be the next president of the United States, and his running mate Mike Pence assumes the position as Vice President of the United States, that ability seems less and less certain. Now that the GOP has control of the House of Representatives, the Senate, and the White House, repealing Roe v. Wade and outlawing abortion is a very real possibility. Given Pence's stance on reproductive rights as the former Governor of Indiana, it paints a harrowing and terrifying picture — one that forces women to pay for "fetus funerals," endure unnecessary Targeted Regulation of Abortion Providers (TRAP) laws that put an undue financial burden on them (particularly on women of color and lower-income women) by mandating 72-hour waiting periods before abortions can be performed, and would make the collection of fetal tissue for research purposes a Level 5 felony — the ability to point to our country's Constitution and say, "Women have the right to complete bodily autonomy," feels under attack.

In the coming months, and after Trump and Pence take office in Jan. of 2017, I have no doubts that the reproductive rights afforded to the women of this country will be under attack. However, as the reality of the election results continue to set in, I'm realizing that a potentially efficient and successful attack on reproductive rights will not make it more difficult for me to teach my son about the importance of bodily autonomy for all. In fact, it might just make it easier.

Regardless of the plans Trump and Pence have concerning abortion, I'll be able to point to history books and show my son how valiantly and vigilantly women (and men) have fought for reproductive freedom. If my right to have an abortion when I want and/or need one is stripped away from me, I'll turn to the pages of this country's past and point to women like Margaret Singer, who pioneered the fight for contraceptives in the '60s. I'll tell my son about the story of Jane Roe, the unmarried Texas mother who challenged our nation's stance on abortion by claiming it was unconstitutional for the practice to be banned. Because of her bravery, Roe v. Wade was passed in 1973 and this almost-30-year-old mother was able to have the abortion she needed at 23 — an abortion she'll unapologetically tell her son about when teaching him about bodily autonomy.

I'll flip back the pages of history to today, to this very moment, and tell my son about the inspiring women of Poland who went on strike in Sept. of this year to protest a potential ban on abortion. Those women protected reproductive freedom and saved an untold number of women's lives when over seven million of them went on strike, fought for control of their bodies, and had the potential ban dismissed.

As my post-election sadness subsides, I am emboldened with a renewed sense of purpose.

I'll tell my son about women like Alicia Hupprich, who made the heartbreaking decision to have a late-term abortion in order to save her child from unnecessary suffering. I'll remind my son that Hupprich's choice not only highlights the vital necessity of abortion and women's access to it — at all phases of a woman's pregnancy — but that women are unbelievably strong, to the point that they're truly the only people capable to make those decisions when they affect their own bodies.

So, yes, as a feminist mother who's had an abortion and who now takes care of a 2-year-old toddler, the thought of trying to teach my son that women have the right to make their own choices about their own bodies in the midst of a Trump/Pence presidency is nothing if not daunting. However, as my post-election sadness subsides, I am emboldened with a renewed sense of purpose.

And nothing that may or may not happen once Trump is President of the United States, will change that.