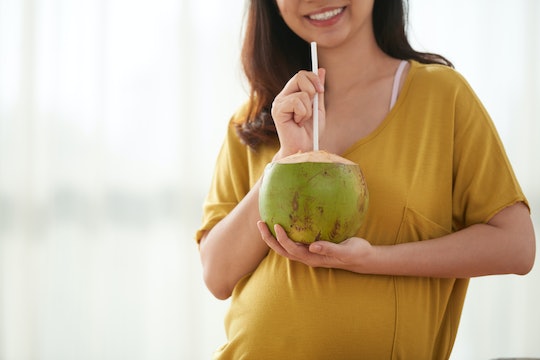 Controversial Ad Pulled For False Claims About Drinking During Pregnancy

During pregnancy, there are many foods and drinks that women are told to abstain from in order to protect both their health and the health of their baby. The first one to come to mind for most people is probably drinking alcohol. However, that certainly did not stop the alcohol industry from suggesting otherwise. An alcohol-industry funded ad implies that drinking alcohol during pregnancy may not actually be hazardous — and people are understandably outraged.

The advertisement in question was distributed by the not-for-profit organization DrinkWise Australia. The organization partnered with Tonic Health Media, an Australian health network, to hang the posters in hospitals and general practitioner clinics across Australia, The Sydney Morning Herald reported.

After the poster made the rounds, many public health groups lashed back at DrinkWise, The New York Times reported.

Tony Bartone, president of the Australian Medical Association (AMA), reached out to DrinkWise to urge the organization to alter the poster. "Alcohol is a teratogen, it can cause birth defects, so we couldn't understand why that messaging was there," he told The Sydney Morning Herald. After the AMA contacted DrinkWise, the organization pulled the poster. "I told them about the misleading information and potential outcomes and they responded in a quick and timely manner," Bartone added.

Simon Strahan, chief executive of DrinkWise, confirmed to The New York Times that DrinkWise pulled all 2,400 posters that had been distributed after the AMA expressed concerns. He told the newspaper in a statement:

It is clear, from the "It’s safest not to drink while pregnant" headline of the posters, that the intent is to encourage abstinence when pregnant, planning a pregnancy or breast-feeding ... DrinkWise wants to ensure all women are aware of the risks of drinking while pregnant.

According to the Centers for Disease Control and Prevention (CDC), it is unsafe to consume any amount or kind of alcohol during pregnancy. Alcohol in a pregnant woman's blood travels through the umbilical cord to the fetus, which can cause miscarriage, stillbirth, or a variety of fetal alcohol spectrum disorders (FASDs), the CDC noted. FASDs include stunted growth, poor memory, learning disabilities, delays in speech, vision or hearing issues, poor coordination, and poor reasoning skills.

New iterations of the poster boast different text that makes the effects of drinking while pregnant slightly clearer. “It’s not known if alcohol is safe to drink when you are pregnant" has been changed to read: "A very important choice you can make for the health of your baby is to abstain from alcohol while pregnant, planning a pregnancy or breast-feeding," The New Zealand Herald reported.

No matter how much DrinkWise encourages pregnant women to abstain from drinking, the organization's messaging is still backed by a group of companies who all share a common goal — and that goal is not to keep pregnant women and their babies safe, but to sell alcohol.