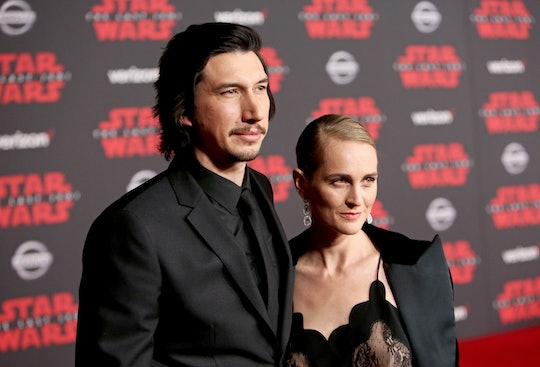 At this point, the trend of celebrities keeping their personal and professional lives separate isn't exactly a new phenomenon. Famous couples like Kristen Bell and Dax Shepard have refused to share photos of their two daughters — and so have Ryan Gosling and Eva Mendes. Plenty of other stars have opted to wait several months before announcing the birth of a child (or having the information leaked.). However, the length of time one celebrity baby was allegedly kept under wraps is seriously impressive: Adam Driver's rumored secret child was apparently born two years ago, it turns out, and the actor has managed to keep his new addition out of the headlines all this time. (Romper has reached out to Driver's reps, but did not immediately hear back.)

As Page Six recently reported, Driver and his wife, Joanne Tucker, reportedly have a 2-year-old son together. But somehow, this tidbit of information has managed to escape public knowledge until recently. (You know, despite the fact that Driver plays Kylo Ren in the new Star Wars trilogy, and is kind of a big deal.) Friends of the couple apparently spilled the beans, telling Page Six that family members have posted about Tucker's pregnancy on their private Instagram accounts. One post reportedly showed a photo of Tucker with her sister when they were pregnant at the same time. It sported the caption, "“Sisters. Nearly matching everything. #babyshowerx2.” In another post by Tucker's other sister, the caption read, "My sisters and new moms.”

Cue: All the Star Wars jokes on Twitter. MAD Magazine hilariously tweeted, "Adam Driver has secretly been a dad for two years, keeping his son hidden from view. The child was allegedly sent to a harsh desert world orbiting twin suns where he’d be safe from the Empire." LOL. That sounds oddly familiar ...

Others seem to be both tickled — and shocked — by the revelation the Star Wars actor is a father. One Twitter user wrote, "Wait, Kylo Ren’s a dad and nobody knew about it? Adam Driver and Joanne Tucker are reportedly parents of a two-year-old son and this somehow escaped the public eye."

Yet another person tweeted, "Adam Driver has a two year old son? My heart is melting. I bet he is the best dad."

Another person chimed in with, "I've just been informed adam driver has a son. he's a dilf."

Still others seemed indignant on the celebrity couple's behalf. One Twitter user wrote, "On fb so many people are talking about Adam Driver having a child that no one has ever seen. Leave the man alone. He doesn't have to share his life with the world." (Amen!)

As W Magazine reported, it appears Driver nearly let the news slip himself during a couple of interviews. In a 2017 interview with the publication, Driver was talking about the love he has for his dog when narrowly brought up the existence of his child. "I look at my dog — this sounds so absurd, but it's not — I don't know that I could love anything more," he said. "Like, I have a kid — oh, uh, maybe — and will be like, 'Eh, you know.' But the dog!" Hmm.

So far, it doesn't seem as if Driver or Tucker have responded to reports of them having a child. Which doesn't come as much of a surprise, considering the couple is known for being extremely private, and Driver doesn't even had an Instagram or a Twitter account, according to Refinery29.

The way I see it, if Driver and Tucker really do have a toddler son and haven't publicly spoken about him — then they probably have a pretty good reason. (You know, like privacy.) Still, in this day and age of social media, news outlets publishing birth certificates, and "friends" spilling the beans, it's impressive they've managed to keep their reported son on the DL for more than two years. So is it too much to ask if fans continue to give them space and respect their decision to keep him out of the limelight?