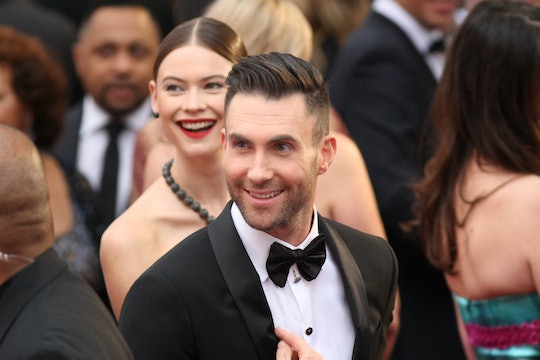 Adam Levine has made a living as a talented musician, but this means he gets to be sort of a sex symbol a lot of the time. Not simply because he's a musician, I don't want to generalize, but also because he's one of those guys who happens to be very appealing to certain members of the population, like me and every one of my friends. While I'm certain he's enjoyed his role as cool guy rock star, it looks like he's even more excited about a new role in his life. As it turns out, Adam Levine and his kids are getting to spend more quality time together thanks to his newest gig.

As the lead singer for Maroon 5 and judge on The Voice, Levine has performed for millions of adoring fans over the years. But after 16 seasons on the hit show, according to Entertainment Weekly, the "Payphone" singer decided to step down last year. And now that he's a dad to two little girls, 2-year-old Dusty Rose and 1-year-old Gio Grace with model wife Behati Prinsloo, Levine is working on changing his priorities.

Yup, he is now a proud stay-at-home dad to his two girls, and as he explained in a recent interview with Ellen DeGeneres on The Ellen Show, he couldn't be more excited about it if he tried. Also get ready he has a mohawk.

Levine started by opening up about leaving The Voice after 10 years and how he felt about his departure, admitting he has mixed feelings about the change. "I love the people that I met and worked with, and obviously we all know how I feel about Blake, but I also don't miss how much I had to work," he told DeGeneres. "I was just constantly working for so many years. Very lucky, very fortunate, very blessed, and all that. But it's nice to be able to just stop it in this moment to spend time with my new, young family."

The singer went on to tell DeGeneres he was having the "greatest time ever," at this time in his life, hanging out with his kids. Levine said he is now a "stay-at-home dad" with his daughters, although he also said he "does very little," which will naturally make every stay-at-parent's blood boil for sure, even though I'm fairly certain he was being facetious.

One thing he's not kidding about is how much his little girls mean to him, telling DeGeneres in the same interview that he is "obsessed with them." He added, "I know that is a good thing because they are my children but that is why I don’t do much because I love hanging out with them."

Little Dusty Rose and Gio Grace must be incredibly charming toddlers, to be honest, because it isn't just their dad who is so head over heels for them he is rethinking his career. In fact, their mother, Victoria's Secret model Behati Prinsloo, told People in 2017, "I think for both of us, we’re just so obsessed with being a family and having a family — seeing this next step in our life."

Now that they've arrived at that step, it's nice to see Levine embracing it at every turn.