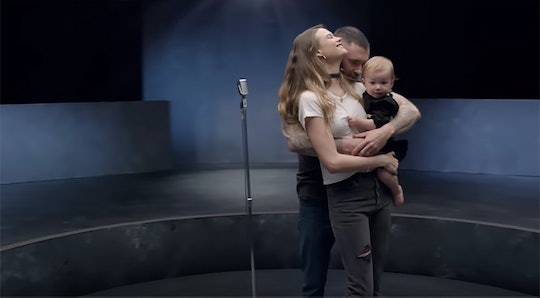 Adam Levine’s Daughter Made A Cameo In His Music Video, & You'll Definitely Tear Up

I think it's safe to say fans love when celebrity parents include their kids in their creative projects. Take Pink's adorable 6-year-old daughter, Willow Sage Hart, for instance. Willow starred in three of Pink's music videos as of May 2018, and each appearance was a hit with fans. As for the latest celebrity offspring to steal the show, look no further than this music video featuring Maroon 5 singer Adam Levine's daughter. Suffice it to say, this emotional video for the song "Girls Like You" is melting fans' hearts.

Throughout Maroon 5's long career, the band has dropped a ton of acclaimed music videos. In fact, two of the band's videos — "Payphone" and "Sugar" — won Video Music Awards for Best Pop Video. Although these videos are fun and impressive, the video for "Girls Like You" is especially notable because it features a great group of women — including Levine's 1-year-old daughter, Dusty Rose.

But before I get to the cuteness of Dusty Rose, it's important to understand the video's vibe and the song's likely intention. Essentially, the song features Levine crooning over and over, according to Genius Lyrics: "I need a girl like you, yeah yeah ... I need a girl like you." Although those words might not seem very deep or meaningful (there are *a lot* of yeahs in the song), I think it speaks to a person's desire to have a special woman by their side — whether that be a mom, best friend, or partner. Simply put, I view the song as a loving tribute to every woman out there, and I also think the lyrics speak to the strong bond that can exist between two people. "Spent 24 hours, I need more hours with you," Levine sings in one verse of the song, according to Hello Giggles. How Sweet.

For those of you who think my analysis might be a bit of stretch, first consider the stars in the music video. Powerful women like Olympic gymnast Aly Raisman, Wonder Woman star Gal Gadot, and MuslimGirl founder Amani Al-Khatahtbeh are just some of the names to make an appearance in the project. I think many people can agree that society needs more women leaders like the ones featured in "Girls Like You."

As for how Dusty Rose plays into all of this, she makes her cameo at the very end of the video. Following a stream of amazing women (I'm not exaggerating when I say this — the list is on point), Dusty appears in the arms of her mom, Behati Prinsloo. As the music slowly starts to fade away, Levine turns away from his microphone and embraces Prinsloo and Dusty. It's a very emotional few seconds because the deep bond between the trio is clearly visible. It's quite obvious Levine was thinking of Prinsloo and Dusty when he crafted the song alongside his bandmates.

Oh, and if you're wondering about Levine's second daughter, 3-month-old Geo, I bet she was too young at the time to star in the project.

"Bruhhh my tears were rolling when Adam hugged Behati and Dusty," one person commented on the YouTube video of "Girls Like You."

Another person chimed in: "The second to last scene tho. *Cries* His family is so beautiful!﻿"

"Bout cried at the ending with his fam﻿," a fan added.

Someone else said: "The end is just too damn adorable!!﻿"

"Adam, Behati and Dusty Rose Levine at the end of the Girls Like You music video melted my heart," one fan penned on Twitter. "They're the cutest!!

It's not difficult to see why people are having such emotional responses to this video. Not only does the song celebrate a group of incredible women, but it also pays tribute to the deep love Levine has for Dusty and the other special ladies in his life. How beautiful.