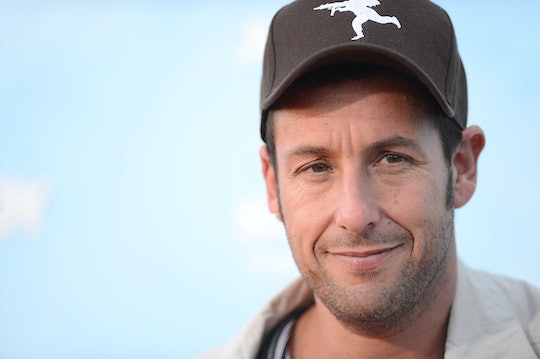 When most people think of Adam Sandler, they probably recall his epic acting and comedic career, including hits like Happy Gilmore and The Wedding Singer. But what doesn't automatically come to mind? The fact that he's a father of two. And most recently, Adam Sandler's daughters sang Taylor Swift's "Lover" with a Hanukkah twist, suggesting they're bound to be as famous as their hilarious dad.

If you're like me, and weren't aware of how many kids Sandler has or how old they are, the longtime singer and comedian is the father of two daughters, Sadie, 13, and Sunny, 10, who he shares with his wife, Jackie. And although Sadie and Sunny seemingly lie low in comparison to their famous dad, Sandler recently invited them onstage with him during a charity fundraiser event.

On Sunday, Oct. 6, Sandler had about 15 minutes left of his 60-minute stand-up/songs set when he called his daughters up to join him, People reported. “We’re gonna sing a song! They’ve been so excited and nervous, but we’re gonna sing a song,” Sandler told the audience at the Rock4EB! fundraiser in Malibu. “They saw Taylor Swift last night, we were at Saturday Night Live. That was a big night, man. Taylor Swift — holy sh*t.”

Sandler added, “This is one of their favorite songs. We play this all the time, me and mommy and the two kids."

Luckily, the rendition was recorded by one of the event's attendees, journalist Chris Gardner. "There are many, many highlights I recorded from tonight’s #Rock4EB but this one is pretty special," he wrote on Twitter. @AdamSandler handling guitar duties while his daughters Sunny & Sadie sing @taylorswift13 “Lover” in front of Julia Roberts, Sean Penn, etc. They’re major Swifties, and so good too."

They're so good, right? In case you didn't catch it, the sisters made a slight tweak to Swift's lyrics. "We could leave the Hanukkah lights up ‘til January," Sunny and Sadie sang, according to E! News. "This is our place, we make the rules." It's pretty fitting considering their dad wrote the hit, "The Hanukkah Song."

For the record, the Sandler sisters weren't performing for just any crowd. Among the star-studded members of the audience were: Julia Roberts, Sean Penn, Courteney Cox, Kaley Cuoco, Rami Malek, Judd Apatow, Leslie Mann, Elizabeth Olsen, David Spade, Cindy Crawford, Catherine O’Hara, and Kim Basinger, according to The Hollywood Reporter. Sadie and Sunny's performance resulted in a standing ovation from the crowd.

“Thank you for being so nice to them,” Sandler said, following the family performance. “They were dying to be a part it. Girls, you did great! Sounded awesome — confident and cool. I love you, now get out of here.”

Twitter seemed to agree: Adam Sandler's daughters are as talented as they are adorable. "Omg they are so good! It’s beautiful," one Twitter user shared alongside heart-eyed emojis.

Another person commented, "Omg I love this so much!!! I’ve always been a huge Adam Sandler fan but now I love him even more!!!"

Yet another Twitter user chimed in with, "My daughter now wants to be best friends with Sunny & Sadie She was so impressed...and #Lover is one of her favorite songs as well."

I don't know about you, but after hearing them cover "Lover," I'm now a fan of Sadie and Sunny Sandler. Considering the warm reception to their awesome performance, I wonder if their dad will invite them onstage again in the future?