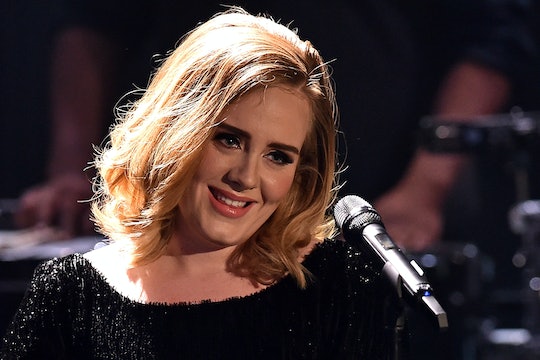 Adele Cut Her Hair, & It's Making Us All Feel Some Type Of Way

Just when it seems like there couldn’t possibly be anything else Adele could make headlines for, after releasing a mammoth first single that broke the Internet, and then an album that shattered first week sales, she somehow found a way: Adele cut her hair and debuted her shorter ‘do on the X-Factor U.K. finale Sunday, and I think we can all agree that girl looks totally fab. Adele has already firmly established herself as the queen of the perfect cat-eye liner, and she always finds a way to look perfectly glam for all her performances (while fully embracing her no-frills, “I have a toddler” approach to beauty when she’s not working, which only makes us love her more). But taking off a few inches has left her looking super chic, and everyone is pretty much unanimously loving it. Is it even possible for Adele to do something we don’t adore? I’m thinking not.

Of course, Twitter reacted almost immediately to the news, swooning over Adele’s new look. And while it’s totally possible that the short bob was just the inevitable short cut lots of women resort to when we get sick of endless ponytails and messy buns (you know, when we aren’t getting dolled up by our personal glam squads ahead of live TV appearances), we still can’t help but hope that there was some kind of intriguing inspiration behind her new look. Maybe she wanted a fresh start to prepare for her first tour in four years? Because we all know that tour is going to be insane (and this morning Adele announced a tour in North America, so cue another bout of Internet freakout).

Adele fans are spreading the love like crazy today:

Unsurprisingly, she’s given us all a case of short-hair envy:

Longing to see more of Adele? Her much-anticipated TV concert special is airing Monday at 10 p.m. on NBC (but since it was recorded in November, we sadly won’t be seeing her new haircut).