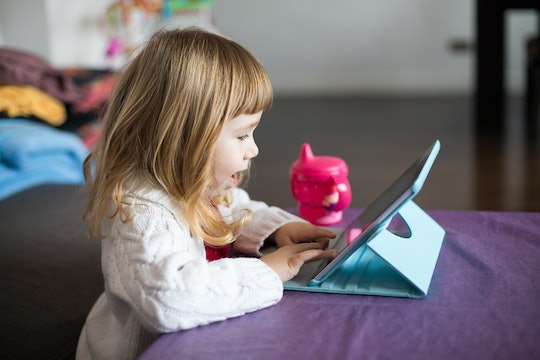 Screen Time Could Be Causing ADHD In Teens, According To A New Study

As parents, it's hard not to worry how your child's smart phone use will affect their behavioral, psychological, and physical development. After all, dozens of studies over the years have documented technology's negative effects, such as poor behavior and underdeveloped thumb muscles. And there's another one to add to the list: ADHD symptoms in teens may be linked to frequent device use, according to new research.

A new study published this week in The Journal of the American Medical Association (JAMA) has found a correlation between teens who exhibit Attention Deficit/Hyperactivity Disorder symptoms and their daily amount of screen time, according to Engadget. In particular, researchers from the University of Southern California surveyed more than 2.500 high school students over a two-year period, and discovered that those teenagers who engaged with multiple digital media platforms several times a day were about twice as likely to report ADHD-related symptoms, which include trouble focusing and lack of impulse control, Engadget reported.

For the study, the research team focused on 14 different digital activities, such as texting, streaming music, online chatting, and checking social media, according to Mashable. The study found a significant association between 10 of those 14 activities and ADHD-like symptoms.

This study raises new concerns whether the proliferation of high-performance digital media technologies may be putting a new generation of youth at risk for ADHD.

Leventhal continued, according to Reuters:

While digital media use in moderation might provide some benefits, like access to educational information or social support, excessive exposure to digital media entertainment could have adverse mental health consequences.

This isn't the first time research has linked technology to ADHD. A 2014 study published in the journal Developmental Psychology found that teenagers who watch television or play video games face an increased risk of developing ADHD symptoms compared to their peers. Another study, published in the journal PLOS One in 2013, discovered that adolescents who used cell phones for voice calls had a greater chance of developing ADHD behaviors than those children who didn't.

Previous studies have also documented other ill-effects of too much screen time. A report published this year in the journal Pediatric Research found that excessive tech use that interrupts child-parent interactions can cause problem behaviors in young children. And research published in Translational Psychiatry in 2016 found that distracted parents may have a harmful impact on a child's development and their ability to process pleasure, according to TIME.

But parents should be cautious about how they interpret the JAMA study published Tuesday. The researchers admit that, although the "twice as likely" finding is "statistically significant," the correlation between tech use and ADHD is "modest," according to Engadget. The study wasn't also a controlled experiment, and there's also a possibility that some participants had undetected ADHD symptoms when they signed on, Engadget reported.

Even so, the findings do support evidence that parents should find ways to curb digital media use, not only among teens, but young children, too. This doesn't mean taking a hardline stance, and ridding your home of devices. Or even imposing hard time limits. Rather, researchers suggest parents take a look at how they can encourage healthier habits, such as ignoring notifications, or identifying moments during the day that can be set aside for single-tasking or some downtime.

There is no way to get away from technology. It is too integral to today's society. But creating boundaries around digital media can, at least, help balance the scales.