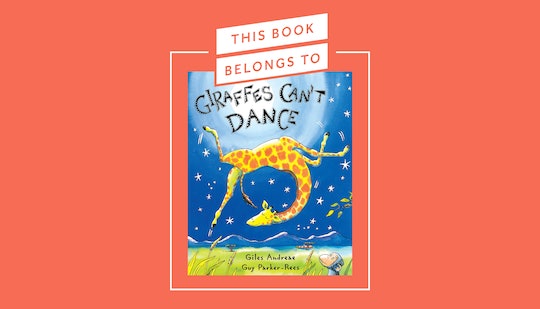 Visualize it: bedtime. You are rocking your small, footsie-pajama-clad offspring, the IKEA lamplight low. Perhaps you are nursing or giving a last bottle as you read a book in a soothing voice and point to the textured shapes therein. The scene is almost gratuitously picturesque. You are a paragon of womanhood, the Madonna with Board Book. Except your thoughts are not pure. You are not feeling maternal devotion. You do not want to touch the fluffy chick or encourage anyone else to. You are thinking, “This is why women in the ‘50s took tranquilizers.”

It was in this state of mind that I encountered Giraffes Can’t Dance by Giles Andres and Guy Parker-Reis. The prospect of another six thick pages — board books are always both too short and too long — of colors, numbers, or faux-fur baby animals was stultifying. Yes, GCD had an actual title, which was more than I could say for the rest of L’s library, but based on the books I’d encountered so far in my short tenure as a person who reads to babies, I didn’t have much hope.

I imagined the touch-and-feel nightmares that awaited. “Can you feel the giraffe’s fuzzy nose?”

No, I cannot. I have lost all feeling for anything.

Fortunately, this was a different story.

I first took to Gerald because among stacks of cardboard promising to speed my child’s synapses and paralyze my own, there it was, almost gleaming: a narrative. An arc, some goddamn drama, a hero's journey! There were developed characters, there was deliberate word choice, there were jokes! There was also rhyme and alliteration, but not the offensively stupid kind. (Besides, you think rhyme is cheesy until you spend two months with no words beyond the documentation for products called things like “My Little Snuggapuppy Deluxe,” at which point your prefrontal cortex is desperate for a sign you're still into it and want to continue the relationship.)

This was all very embarrassing, to like some inane kids book so much, but no one had to know, I thought.

For the uninitiated, here’s the plot: Gerald, a giraffe, can do a lot of cool things, but he can’t dance. This is a problem because “every year in Africa they hold the jungle dance” — yes, there is probably a lot of post-colonial badness to unpack there — which is basically an animal kingdom dance-off. The rest of the animals are like Center Stage-level good. It seems like the baboons must have trained under Baryshnikov. Gerald dutifully steps forward for his turn, and he is publicly shamed, particularly by some snooty lions who never learned how tacky it is to punch down. He slinks away and is contemplating his failures as a being when a wise cricket counsels him to hear music in the things that mean the most to him. This really centers Gerald, the inspiration hits, and suddenly he is cutting a rug to the tune of the cricket’s violin. The other animals get wind of this and come to watch, ultimately cheering him on and asking him his secret.

Of course there was a moment, in the dark cynicism that came with being chained for weeks to another person by my boobs, when I rejected Gerald’s message as overly simplistic. Everything does not make music if you really want it to, Gerald. There are actually very few occasions in life when you spontaneously find your groove, and those biatch lions would have punished you even more for your sweet new moves.

But then L would fall asleep on my chest, and the fatigue-rage would subside, and I would find myself reading a little longer. The rhythm of it lifted my mood, and I smiled every time the lions “did a tango that was elegant and bold.”

This was all very embarrassing, to like some inane kids book so much, but no one had to know, I thought. On a whim I decided to see if I could memorize it. I hadn't memorized any piece of writing since senior year of high school, but I was committing Gerald to memory, I explained to myself, as a brain-preserving exercise, like the Sudoko my mother plays for hours on end claiming it will ward off dementia. My mother also believes that blueberry margaritas prevent cancer, but my Gerald experiment involved an actual brain exercise, I said. The misunderstood ungulate was keeping me from losing my mind.

I have to admit that I loved Gerald partly because I thought the book's author and illustrator were French. When I read the title page aloud, which I always do because my kid is going to respect writers, I pronounced their names the way I would if I were in Paris, which reminded me that France exists, and with it travel, museums, art, sex, aimless metro rides, mini skirts, book stores, and tear-jerking coq au vin. They could be two guys from Jersey, they could be French Canadian (they are actually British and white Zimbabwean), it didn’t matter. The illusion was enough for me.

But misplaced Francophilia aside, I realized that I liked the book because it reminded me of the things I most wanted to share with my child: the sense that books and language are her friends, and the sensation you get when words fit together exactly right, whether you wrote them or someone else did. This will sound overblown, but I assure you, it’s considered: in Gerald the Giraffe I found a mini reunion with the sublime.

Now you are sitting in a chair with this person who is of you but not you, and you are learning to care for and perhaps even lead her, as terrifying as that is. And that is when you most need to hear that things that do not come easily to you can magically become easier.

When you’re a person who likes or makes art and suddenly, almost inexplicably has a baby, the sublime splits off into two versions, one you know well from, say, the last page of 100 Years Of Solitude, and one you’ve never encountered before.

The first you experienced the first time you read a sentence, just a sentence, that was so beautiful and did something so intricate and useful in its particular setting, that its total fulfillment of its job as a sentence made you feel like many unrelated things would be OK.

This version of the sublime you have almost no time for in early motherhood. Are you reading Absalom, Absalom on three hours of sleep? You are not. You can — or at least I could — write or paint exactly nothing. Your best hope is a children’s story that honors the basic tenets of narrative and reminds you of their beauty.

And then there’s the new version, which you maybe never saw happening to or for you, in which a totally dependent, unspoiled person who smells better than anything will ever smell has been tendered into your care. A baby manifests a different kind of creative beauty, in some ways more spiritual because it came about on its own. Sure, you put things in motion when you did it in the bathroom at that boring rehearsal dinner, or spent months financing a bloviating fertility doctor’s next Porsche, but no one sat a their desk and arranged and rearranged the cells until they were just right. The cells did not have an editor at Random House. They just knew what to do. And now you are sitting in a chair with this person who is of you but not you, and you are learning to care for and perhaps even lead her, as terrifying as that is. And that is when you most need to hear that things that do not come easily to you can magically become easier, with a little encouragement and permission to do them your way.

It's been a couple of years now since L moved on from the clumsy giraffe. She has Paddington now, and Dory, and miscellaneous princesses that I’ve decided not to worry about because that just gives them power, and an anthropomorphized Israeli ambulance named Avi. Her little sister is so far more teether than reader and, if given the opportunity, would reduce Gerald to tree pulp.

But I haven’t forgotten him. Sometimes I think about the sequel I’d write. After a stint on Dancing With The Stars, G stars in a limited engagement, one-giraffe show. The cricket gets first chair at the Met and also runs a sound bath studio on West 64th Street. The lions, based on their rep for being those guys, are performing on a cruise ship.

And the woman in the rocking chair turns the page and keeps going.