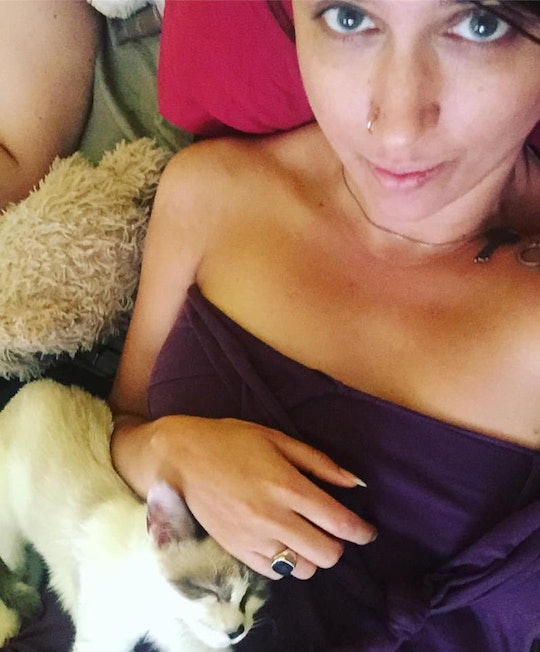 Adopting A Kitten Brought My Birth-Mother Guilt To The Surface

It's no secret to anyone who knows me that I love my kitten. Her name is Sophie. She's a rescue. She's got rag-doll coloring but is less fluffy and more of a hunter than most rag dolls, so we're not sure what she is. She plays fetch, sleeps on my lap, and looks unnervingly like a raccoon. I snuggle and photograph her every chance I get. I thought she was dead the other day and nearly lost my mind, but it turns out she was just holding really, really still; I gave her a treat just for being alive. What most people don't know, however, is that adopting my cat has brought some serious birth-mother shame to the surface for me. Four years ago, I placed my son Leo in an open adoption with a wonderful gay couple. He's become an amazing little boy: smart, silly, polite, enthusiastic. His fathers are doing a wonderful job as parents, and the adoption remains one of the best decisions of my life. But I couldn't have predicted all the ways in which taking a cat into my home would trigger all my adoption-related guilt.

I feel guilty about everything. Guilty about how much more time I spend thinking about Sophie than Leo, as though I could avoid thinking about a small, mayhem-causing raccoon-cat who literally sleeps in my bedroom, as opposed to someone I see once a month. I feel guilty about the fact that virtually all of my nurturing and care-taking energy is going towards a cat and not my son. I feel guilty about the way I obsessively document every cute thing Sophie does, the way I used to obsessively document my visits with Leo and no longer do. She's growing and changing faster than he is, she's newer than he is, and of course I'm going to take her picture obsessively (just look at that little FACE!) — not to mention, I want to spend my visits with Leo actually visiting, not looking through my phone-camera at him the whole time. But it all reminds me of my failures: the financial, career, romantic, and personal failures that made me even think about placing my son for adoption in the first place.

Then there's the nagging voice inside me saying things that make literally no sense at all, like, "You couldn't take care of a kid, but you can take care of a cat?" as though the two were remotely comparable. As though kids can be left alone all day like cats can. As though cats and kids cost anywhere near the same amount. As though my roommates would have been OK with a newborn joining our household. It's a ludicrous thought, but it's the one I battle daily.

Patrick and I have taken to calling each other "mom" and "dad" when talking to the kitten. We spend at least half our conversations talking about what she did that day. We fret about her and revel in our mutual amazement at her. I know that these experiences are only a tiny fraction of what we'd have with a human child. Nevertheless, they remain a bittersweet reminder of what I'm missing out on by not raising Leo.

Largely, the thing that triggers my guilt is the assumption of the "cat mom" role, which I mean as literally as possible. Trying to teach my kitten how to interact with the world and what to expect from people. Wanting her to love me (and my fellow cat-parent and boyfriend, Patrick). Soothing her during moments of duress, playing with her, trying to see the world through her eyes. Patrick and I have taken to calling each other "mom" and "dad" when talking to the kitten. We spend at least half our conversations talking about what she did that day. We fret about her and revel in our mutual amazement at her. I know that these experiences are only a tiny fraction of what we'd have with a human child. Nevertheless, they remain a bittersweet reminder of what I'm missing out on by not raising Leo.

Another huge factor in all this is that I can have physical contact with Sophie whenever I want. I mean, sure, if I time it badly and don't pay attention to her body language, it can backfire, but I can (and do) snuggle this little fluff muffin every day. I can't do the same with my son — not only because I see him less often, but also because I obsessively ask his permission before touching him. I ask "Can I hug you?" "Can I give you a kiss on the cheek?" and mostly he says yes, but sometimes he turns me down. So, that flood of oxytocin and protectiveness that washes over you during physical contact with a small adorable being? That's available to me from my cat on a daily basis, but I've sometimes gone whole visits without making physical contact with my son. I didn't know until I got her how much it would mean to me when she rubs her cheek against mine, or when she lets me rest my face against her back while she's sleeping. The hugs and kisses from Leo mean exponentially more, but in terms of sheer volume, it's like a 99-to-one ratio of Sophie snuggles versus Leo snuggles. I'm physically bonding with my cat in a way that I can't possibly bond with my son, which is yet another source of guilt.

I love my son. Full stop. In a very different way, I love my kitten.

And then, of course, there are the moments when I fail as a cat parent, like when Sophie runs away from me, or whimpers because I'm cutting her nails or have held her for too long, or when I've forgotten to feed her for hours. Again, that completely illogical (yet persistent!) internal voice speaks up: "You can't even take care of a cat; how would you have taken care of a kid?" It's irrational, it's not kind to myself, but it's very much there.

It also doesn't have to take away the tremendous joy that both my son and my kitten bring me. When I hear that voice sound off, I try to just breathe through it and not feed the troll inside my head. That doesn't mean ignoring it — because that voice comes from a place of pain and loss and I have to honor that — but I do my best to try to avoid adding guilt on top of guilt. I placed my son for adoption because I believed he deserved a better life than the one I was able to give him at the time. And then I adopted a cat years later.

So, having a kitten is complicated for me as birth mother, but I'm realizing that's fine. I can feel guilty and uneasy and conflicted, and also have my heart explode with love when I watch her wake up from a nap, or when my son answers the door. I don't have to pressure myself to stop feeling guilty, or impose some Draconian-woo-"self-love"-pseudo-feminism on myself where I pretend these feelings aren't there. I love my son. Full stop. In a very different way, I love my kitten. My kitten lives with me, my son does not, and sometimes that feels weird. And everything about that is totally OK.

More Like This
Sex And Mom Guilt: When I Date Someone New, Am I Cheating On My Kids?
I’m A Newly Single Mom. How Do I Get Over My Body Insecurity?
Turn Heads This Halloween With These Sexy Costumes
Dr. Jill Biden Just Delivered Some Frank, But Powerful, Advice On Motherhood