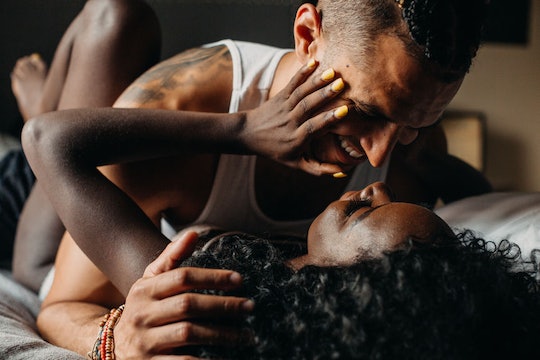 After Birth, A New Kind Of Orgasm

Orgasms are quite literally one of life’s greatest pleasures. The path one takes to achieve them, though, varies from person to person. You’ve probably heard about clitoral orgasms — this type of orgasm is the most prevalent and if you have a clitoris, you know why. But there’s actually a wider array of orgasms than most of us likely know. That’s because there are different schools of thought into how to classify these orgasms. So how do we know all the different ways that we vagina-havers can come? Is one way better than another? Should we all be experimenting with each and every kind? Do we moms even have time for that? Let’s explore together (and maybe research on our own later).

Sex and relationship coach Kim Anami claims in an article for InStyle that there are four types of orgasms (the clitoral orgasm, the g-spot orgasm, the cervical orgasm, and female ejaculation). But the thing is, experiencing female ejaculation might involve different types of stimulation, so does that count as a type? Some argue that it’s not about the kind of orgasm but simply how you get there (which would perhaps eliminate female ejaculation altogether). In an article for WomensHealth, Claire Lampen lists 10 different types of orgasms, ranging from anal orgasms and nipple orgasms to climaxing via breathing techniques or even skin orgasms (think of a way more intense version of getting goosebumps while listening to a song).

Highly-revered feminist sexologist Dr. Betty Dodson has also spoken about this topic quite a bit. Among her “types” of orgasms are combination or blended orgasms (which just means having different types at once, say clitorial and fantasy), multiple orgasms (a series of smaller ones in place of having one major one), relaxation orgasms (experiencing sexual stimulation while in a wholly relaxed state — so probably impossible for many of us, yea?), and — the ones you’re probably very familiar with — tension orgasms (which involves direct stimulation to an erogenous area while also tensing up muscles). And yet another sexologist and psychotherapist Dr. Carlen Costa has written that we can have up to 12 different types of orgasms. This includes “zone” orgasms (like having your neck or inner thighs or other erogenous zones stimulated), A-spot orgasms (from stimulating the anterior fornix, or front vaginal wall), and even U-spot orgasms (that is, from stimulating the urethra, and thus potentially involving female ejaculation). Confused yet?

There are even more ideas on how to define and categorize orgasms, but as a busy-as-heck mama and working woman, I don’t know that I have the time or patience to see if I can achieve an orgasm simply from working out (sorry, coregasms!) So how many types of orgasms are there to be had, and how many of us moms are having them all? In the end, there’s no hard and fast consensus to be had, and as time progresses and the research evolves, we’ll find out more. For the sake of this piece, I’ve asked over a dozen mothers to share which types they’ve experienced, and how their orgasms and sex lives have changed from their pre-baby lives into motherhood.

My husband always says he has to re-learn my body after each birth, and so do I.

Twenty-four-year-old Arlene Soto, a mother of three living in Thornton, Colorado, used to have all types of orgasms (including ones brought on by stimulating the clitoris, vagina, g-spot, a-spot, and breasts/nipples), but this has changed after every birth experience. Today, she’s only able to climax via clitoral stimulation.

“(Sex) is painful and less frequent after each birth for the first few months into the first year,” she tells Romper, adding that she and her husband frequently need to have more open communication and patience in order to get things going.

“My husband always says he has to re-learn my body after each birth, and so do I. We can’t do the same positions, depth of penetration, spontaneous sex, or have sex for longer periods of time,” she says, adding that once pain is involved in sex, it becomes something you end up wanting to avoid.

“(You just) don’t know when it’s going to feel good again,” she says. As someone who experience some pretty awful vaginal tearing during childbirth, I can wholeheartedly understand this. It took me a full year to finally begin to feel somewhat like myself again.

Rose*, 29, told me about how her relationship to her orgasms has changed as well after having her first baby. The DC-based mom used to climax in a variety of ways, from vaginal and g-spot orgasms, to ones brought on by heavy breast and nipple stimulation, to ones solely derived from fantasies. Rose shares that things have definitely shifted, and she is now only able to climax clitorally, anally, or in blended stimulation. Her biggest challenge deals with simply being too tired and not having enough time. While this is an issue many of us face, she and her partner have found one enjoyable fix.

“My husband and I have started talking a lot more about our fantasies in the bedroom, so while we are not as active as we were before, we are definitely more adventurous, which is a win.”

Rose says that her orgasms are a bit weaker and harder to come by these days. She’s also facing a slew of hurdles when it comes to being in and enjoying the moment, including tearing scars, dryness, hemorrhoids, leaky breasts, and a general inability to relax.

“It hurts a lot more than it did before, in most positions, so we use a lot more lube and take things slower, which means orgasm is a lot harder to achieve for me... We have had to seriously up our mid-sex communication post-baby,” says Rose.

Feeling “touched out” is something many mothers experience, and it’s not surprising that this would alter their ability to enjoy intimacy and/or achieve orgasms. Jen Ferris, a mother living in Chapel Hill, North Carolina, shares that after having two breastfed babies in three years, she also felt completely touched out. These feelings became so overwhelming that she stopped having sex entirely, and it eventually took a toll and ended her marriage. But the 40-year-old mom shared that this was not the end of her sex life. In fact, even after having a hysterectomy, she now feels that she’s in her sexual prime.

“I attribute this to getting in touch with myself, having older kids who touch me less, and just understanding my needs better. At 40, I am having the very best sex of my life, which shocks me,” she says.

So many things can change after giving birth. You might experience physical birth trauma if you have a vaginal birth (like tearing). You might experience emotional and mental trauma from a difficult pregnancy, difficult delivery, and so on. Your body might change in other ways. Many new mothers report experiencing more vaginal dryness after giving birth, but other moms state that the dryness continues long after (potentially related to other hormonal shifts, and something you may want to discuss with your gynecologist). That’s not even getting into what happens when you have children who rarely give you and your partner a chance to be alone — there is simply much less time to be intimate. Like Ferris and others, being touched out can cause you to not only steer clear of physical intimacy, but it can cause you to downright loathe anyone’s touch. And don’t even get me started on the challenges of having enough quality “alone time” to connect with your partner, have dates, or have quality and/or varied sex.

Between the physical, mental, and emotional changes that come with motherhood, there’s just no way that things will always stay the same. Do orgasms themselves change after you begin having children? All signs seem to overwhelming point to yes. The only constant seems to be that a large majority of people can usually rely on clitoral stimulation to get off. But hey, it’s OK if you go through a phase of sexual complacency. It’s fine if you need to restock on lube more than you used to. You’re perfectly fine if you need to prioritize sleep over sex for a period of time. Kids are only kids for so long. But orgasms? They’ll be right there waiting for you if and when you decide to get back to them, and whatever type you can have is exactly the right type for you.

*Some names have been changed at the request of the source.

More Like This
In Search Of New York City's Most Luxurious Birth Experience
I’m A Newly Single Mom. How Do I Get Over My Body Insecurity?
Can You Have Sex With Placenta Previa? Experts Explain
Here's Why You Should Avoid Oral Sex If You Have Placenta Previa