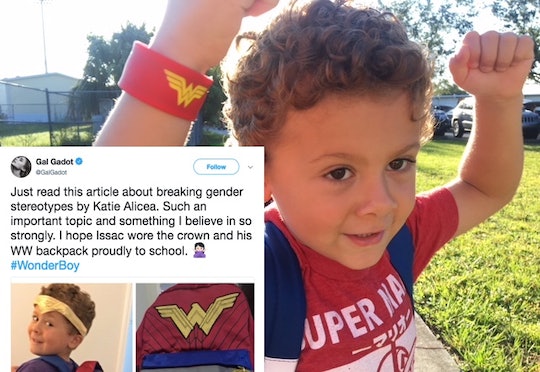 When I shared our story a few weeks ago about purchasing a Wonder Woman backpack for my 5-year-old son, Isaac, I never expected that Wonder Woman herself, Gal Gadot, would read our story and share it.

But she did and it was amazing. "I hope Issac wore the crown and his WW backpack proudly to school," she wrote in a Instagram post that has over a million likes now. Of course it is fantastic to have someone as wonderful as Gal Gadot be touched by our story, but the most impactful part for me was all the comments, photos, and messages of support Isaac and I received through her signal-boost.

All across social media, and in replies to Gadot's tweet, parents shared pictures of their young sons also wearing Wonder Woman backpacks, t-shirts, or outfits. Many shared their stories of having children who break gender norms and stereotypes in all kinds of amazing and inspiring ways. The overall feedback was very supportive and positive, but there was some criticism of our decision to allow our boys to wear and play with whatever they prefer. These comments were expected and are reflective of the messaging we as a society have heard and believed for so long, which follows the belief that there is a right and wrong way for a boy to be a boy and a girl to be a girl.

A few commenters suggested I prepare Isaac for the possibility he will be bullied or made fun of for wearing a Wonder Woman backpack.

One of the most common concerns expressed was that if I allow Isaac to dress up like a princess or wear a Wonder Woman backpack and crown he will become confused about his gender and possibly even his sexuality. While I don’t share this concern, I understand it is common to many parents. That is why I feel talking about this openly and honestly is very important if we are to see healthy change in the messages we send our small children who then carry these flawed narratives into adulthood.

We need to ask ourselves why we view more traditionally feminine characteristics as weak and less than, but view more traditionally masculine characteristics as desirable and powerful. Little girls can be “tomboys” or gravitate toward things that are stereotypically more male and it’s "cute," encouraged, but if our boys exhibit characteristics that are more stereotypically female we tell them to toughen up, “man up." When we tell little boys it is weak to like to play with dolls, then we are telling them that girls who play with them are weak as well. These are the messages that start very early and carry on into adulthood and are what shape how we view and treat each other.

A few commenters suggested I prepare Isaac for the possibility he will be bullied or made fun of for wearing a Wonder Woman backpack — prepare him for the impact of his decision, prepare him to accept the consequences of it. While we do talk to our children about how to handle when someone says something that hurts our feelings or treats us in a negative way, I feel that the act alone of telling Isaac he is different for liking Wonder Woman and therefore may be made fun of will plant seeds of anxiety about himself over something that is unlikely to happen. It may seem naïve of me to feel confident this won’t be an issue for Isaac, but the truth is, I am way less concerned about his fellow 5-year-olds having an issue with his choice of backpack than I am of the adults he might come into contact with.

You see, young children at this age understand that pretending to be someone you admire is a natural part of childhood. They all have their own favorite characters and it is completely normal for children to play pretend and enjoy play acting as their favorite character no matter what gender or species the character may be. Children learn through play and the more we are willing to allow them the freedom to explore the world around them through play acting, the more well-adjusted and confident they will be.

His response to her post was, 'Wonder Woman likes my backpack! Tell her she can borrow it!'

We are a mixed-race family, so from very early on in our boys' lives we have discussed differences with them. Isaac has already encountered a playmate commenting negatively on the fact that his skin is not white. This was a hard conversation to have at such a young age, but it was a wonderful opportunity to discuss how to handle when someone says something that hurts your feelings or that is untrue about you. We teach our boys to be curious instead of fearful when they encounter someone or something different. It’s normal and healthy for children to point out differences, because it shows us they are noticing patterns in the world around them. But how we teach them to navigate the messages they are receiving about anything they experience as different is crucial. As parents, we need to encourage our kids to appreciate and pursue diversity in their lives instead of staying away from things and people they may not understand.

A few people have asked me what Isaac thinks of Wonder Woman herself sharing his story and calling him #WonderBoy. The answer is: not much. That’s because we haven’t and aren’t going to make a big deal about his backpack. Mostly because it is just a backpack and is not, in fact, a big deal. He knows that Wonder Woman saw his backpack and really liked it. His response to her post was, “Wonder Woman likes my backpack! Tell her she can borrow it!”

And then after about 15 minutes of being excited about it, he did what all young children do and he moved on to the next exciting thing in his life. Isaac doesn’t need to know his story is helping other parents navigate important parenting decisions for their children with confidence. He doesn’t need to know that there are some people out there that would have a major issue with his backpack. He just needs to know that he is loved by his family for who he is and whoever he will become, and that we love his backpack because he does.

While putting his backpack away in his cubbie, he announced to the folks standing nearby that he loved Wonder Woman the most and that is why he has her backpack and outfit with a cape at home.

Isaac’s first day of kindergarten was last Wednesday and he excitedly ran into his classroom that morning and gave his new teacher a big hug. We had met her the night before and when I saw the two of them together I knew they were going to make a great match. While putting his backpack away in his cubbie, he announced to the folks standing nearby that he loved Wonder Woman the most and that is why he has her backpack and outfit with a cape at home. As I expected, the kids didn’t seem to pay any attention to his announcement. A few of the adults standing around shot me some nervous smiles, but Isaac had already moved on to making new friends. I told everyone looking at me that we love that Isaac loves Wonder Woman and think his backpack is really cool. They smiled and nodded.

We love and accept others better for who they are when we do the same with ourselves first. Our boys will grow up in a household that will embrace whoever they are, whoever they love, and whatever interest they want to pursue, and they will know that kindness comes first and everything else is just an added bonus. I know Isaac is going to be okay even when, inevitably, someone will hurt his feelings, because he knows he is loved and he knows how to love. After all, it’s so much easier to let what the world thinks roll off your back, when you are wearing a kickass Wonder Woman backpack.