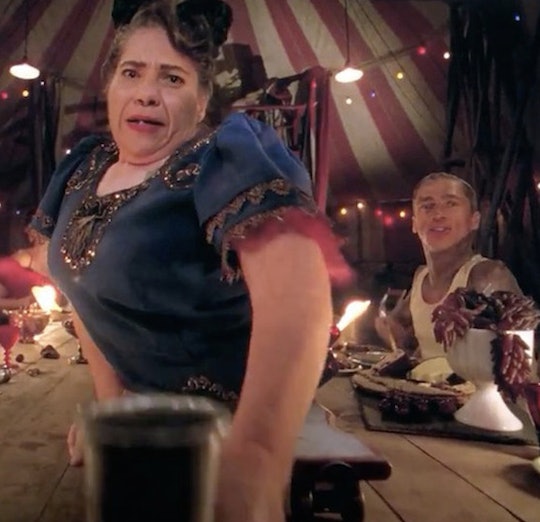 Early Saturday morning, Dec. 12, American Horror Story cast member Rose Siggins passed away due to complications from kidney stone surgery. AHS cast members reacted to Rose Siggins' death immediately, taking to Twitter and asking fans for a couple of things. The first is was for them to honor Siggins' legacy, not only as an actress, but also as an advocate of the disabled. Siggins, who played Legless Suzi on American Horror Story: Freak Show, had both her legs amputated at the age of two. However, to the AHS cast member, being an amputee didn't make her a freak; it was her normal. In American Horror Story FreakShow: Extra-Ordinary-Artists, Siggins said, "I kind of like the way I am. I wouldn't change it. I couldn't imagine myself being what everybody calls normal; because this is my normal."

AHS cast members are also asking fans to donate to a GoFundMe campaign for Siggins that was created to help pay for her health care. Now that she has passed, the funds raised from that campaign will go to the care of her two children, Luke, 17, and Shelby, 10.

Here are some of the things Siggins' cast members had to say about the sad passing of their AHS co-star.

Both fans of AHS and advocates for those with disabilities can show their support for Siggins' legacy by contributing to her GoFundMe campaign and by remembering the value of accepting yourself just the way you are.

More Like This
Khloé Kardashian Promises Tristan Thompson's Late Mom Her Boys Will Be "OK"
Regina King Calls Son Ian Her “Guiding Light” In Moving Post One Year After His Death
Does The FDA's Plan To Limit Lead In Baby Food Go Far Enough?
Even If Your Baby Sleeps Better in Your Bed, It’s Still Not Recommended
What Parents Are Talking About — Delivered Straight To Your Inbox