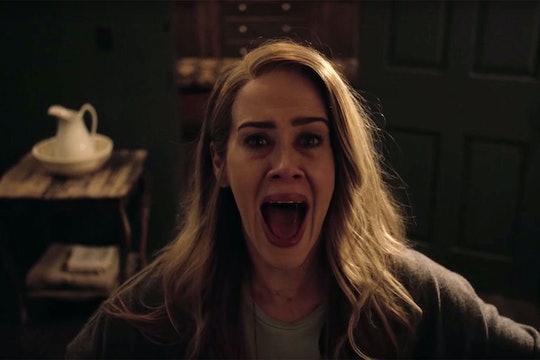 'AHS: Roanoke' Finale Theories On Reddit That Have Fans Anxious For Answers

As viewers head into the final episode of the season, there are still so many plot threads left dangling in American Horror Story: Roanoke. Season 6 has easily been the most-theorized installment of the series overall, with plot twists upon plot twists, multiple characters for each actor, and, of course, plenty of plot teases from Ryan Murphy himself. While it remains to be seen exactly how the ongoing Roanoke nightmare will wrap-up, plenty of viewers are chiming in with their two cents in AHS: Roanoke finale theories on Reddit, taking a stab at explaining how it'll all shake out in the end.

As the apparent sole survivor of the massacre on Roanoke land, many of these theories focus on Lee and whether she'll finally get her comeuppance for the many crimes she commited while staying at the house — like killing her ex-husband Mason, for instance. Not to mention all of the terrors she inflicted on others while she was seemingly possessed by the witch, Scáthach. (RIP, Monet.) Of course, there's also the chance that fans are still not seeing exactly what they think they're seeing — is another perspective shift on the horizon? These are a few of the best (and most plausible) theories on Reddit about the season finale.

One of the most shocking theories holds that Lee's confession to the murder of her ex-husband wasn't all that it appeared to be. Reddit user TheStrongGeek theorized that Flora, not Lee, actually killed Mason. According to this theory, Flora was used as a conduit for the Butcher and killed her own father while under some kind of spell (courtesy of Scathach's influence). Lee's confession was made when she thought she was going to die anyway — it would've been the perfect opportunity to protect her daughter once and for all.

Lana Winters Has The Confession Tape

Thanks to the "Chapter 10" promo, fans already know that they'll be seeing the return of Season 2's fan-favorite, Lana Winters. Lana, a professional investigative journalist, will be interviewing Lee — live on the air. The fact that the interview will be live all but guarantees that something shocking and unexpected will go down.

One possibility? According to Redditor KalebAT, Lana will send Lee to prison, after uncovering the inconsistencies in Lee's story and finding Lee's taped confession. Under the guise of a straightforward interview, Lana will call Lee out on her crimes, tripping her up since the interview is airing live.

Lee Was Possessed All Along

The unreliable narrator trope has been strong this season. Viewers never quite knew who to trust or what information to believe, given that so much of the action was wrapped in the reality TV veil of uncertainty. In a post-episode discussion of "Chapter 9," Redditor LSunday posited that Lee might have been possessed at the time that she killed Mason.

This would explain how she, a relatively small woman, managed to get her much larger ex up on a stake and burn him alive — a very specific form of murder that was big with the Butcher and her people. Her insistence on the confession tape that nobody helped her murder Mason might have been a ploy to convince future Flora not to investigate further, potentially getting possessed or harmed herself if she returned to Roanoke down the line.

Everything Was Faked (Or Partially Faked)

There are several variations of the "everything in the second 'Return to Roanoke' half was faked" out there, but one is by far the most compelling. According to Redditor KmartTheLegend, the entire gruesome nightmare of the follow-up series was a ploy — one orchestrated by production in order to accomplish Sidney's stated goal of forcing Lee to admit to Mason's murder (and, secondarily, to get amazing ratings).

Now, that's a lot of time, energy, and production money to devote to getting one woman to confess to the murder of one man. But it worked — pushed to her brink and certain that she'd die, Lee did confess to the crime. If this is the case, it's not quite clear why the curtain wasn't lifted to reveal that everything had been faked right then and there. But perhaps the intent was not only to force a confession, but to punish Lee for her horrific act as well.

Personally, I'm leaning towards the "Everything was faked to entrap Lee" idea, mainly because it would be incredibly cool to get a "behind the scenes" sort of look at how Sidney et. al managed to fake all of those particularly gruesome deaths. In any event, fans will just have to wait until the finale airs on Wednesday night to see whether any of these theories will come to pass.