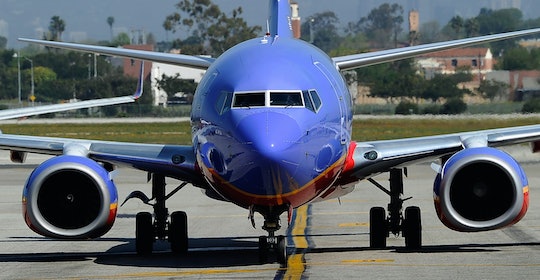 The friendly skies are finally going to get friendlier for everybody. As The Hill reported this week, multiple airlines will soon offer non-binary gender options for customers when buying tickets in an effort to be more broadly inclusive. The move means that people who identify as neither exclusively male nor exclusively female will be given this option when it comes time to purchase their airline ticket. Because every person deserves to be seen and respected exactly as they are, without having to fit into a box defined by someone else.

Airlines For America (or A4A) is an industry trade group for major airlines like Alaska Airlines, American Airlines, Hawaiian Airlines, JetBlue, Southwest, and United. And, according to a statement released by A4A to CNN on Monday, it seems all of these airlines will be implementing a new gender option to their tickets as of June 1, 2019.

"U.S. airlines value a culture of diversity and inclusion, both in the workplace and for our passengers, and we work hard each day to accommodate the needs of all travelers, while delivering a safe, secure and enjoyable flight experience," A4A's statement read, according to CNN.

According to NBC News, passengers who do not identify as either "male" or "female" on their ticket will be given the opportunity to choose from two new options: "undisclosed" or "unspecified."

While Delta Airlines is not part of the A4A group, the company is also choosing to follow suit with similar gender options on tickets. As the airline explained in a statement via CBS News: "As part of Delta's ongoing efforts to accommodate the needs of diverse customers throughout our business, we are planning to offer a non-binary gender option during the booking process."

This is yet another step in attempting to create a world that is more inclusive and accepting of everyone, as seven states and the District of Columbia are now offering people to simply identify as "X" on their driver's license as opposed to male or female, as WDTN previously reported.

While there has been some negativity on Twitter from people who apparently find the change bothersome, even though they are not required to do anything differently, there has been praise for the move as well. For instance, according to TIME, Arli Christian, state policy director for the National Center for Transgender Equality, said in a statement that the move is an "important step toward ensuring safe and smooth travel for all passengers regardless of their gender" as "non-binary people face unnecessary, invasive, and discriminatory scrutiny by airlines, airports and security services alike."

This is one of those updates that will most likely feel so important to the people who need them, and it's a move that will in no way inconvenience those who don't need it. Because it's such a small thing — a new box to either check or not check on an airline ticket. A small and necessary thing that will make so many people feel seen, accepted, understood, and whole.