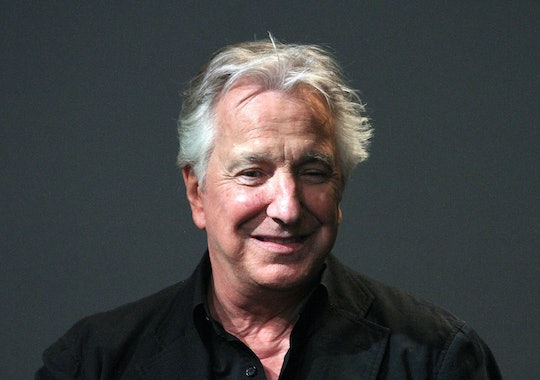 On Thursday, the world lost a legend when British stage and screen actor Alan Rickman died. He was just 69 years old. While Rickman may have been best known for his role as Severus Snape in the Harry Potter series, his career began decades earlier when he performed overseas with the Royal Shakespeare Company. And while I know death is just another part of life, it sucks. Cancer sucks. The death of Alan Rickman sucks. That's why it's an extra sort of eerie that Alan Rickman read "If Death Is Not The End," a beautiful poem from Robyn Hitchcock, before he died.

Just when I thought I couldn't handle any more sad news — when I couldn't read anymore tweets from his colleagues and friends, like J.K. Rowling, Emma Thompson, and Emma Watson — I heard Rickman's reading of the poem and lost it.

Rickman read the poem at Robyn Hitchcock's 50th birthday party, approximately 12 years ago. While it is likely he had a clean bill of health back then, it is eerie to listen to — especially today — but I also cannot stop listening, because Rickman is a great orator and a great showman, and I want to hear more of him. I want to cling to him, and I want to keep some part of him alive. I want to keep his spirit alive, even if it is only in the gems — like this — he left behind.

So sit back and listen, just listen. But be warned: If you're like me, you may want to have your tissues ready! Rickman's voice is part of the reason why he was such an icon, and hearing him read about death will stick with fans forever.

"If Death Is Not The End," by Robyn Hitchcock:

If death is not the end, I'd like to know what is.

For all eternity we don't exist,

In my gumshoe mac, I shuffled to the clifftop,

and struck a match to light my life;

And as it flared it fell in darkness

Lighting nothing but itself.

I saw my life fall and thought:

But this I know:

Of bamboo growing through the prisoner pegged down in the glade

It pierces your blood, you screaming head -

Life is what happened to the dead.

Forever we do not exist

Of charcoal green - a golden gleam,

The opposite of how it seems:

It's not you that goes through life

life is the knife that cuts your dream

And leaves you turned on in the stream, laughing with your mouth open,

Until the stream is gone,

Not even there to be absent,

From the heartbeat of a dying fish.

In bed, upstairs, I feel your pulse run with the clock

And reach your hand

And lock us with our fingers

As if we were bumping above the Pole.

Yet I know by dawn

Your hand will be dry bone

I'll have slept through your goodbye, no matter how long I wake.

Through Cheri and Karl who can no longer smell chocolate,

Or see with wonder wind inflate the sail,

Through Katy who was Catherine but is bound for Kate

Who looks over her shoulder at the demon Azmodeus,

And sees the Daily Mail

The frozen butter in the Alpine wreck.

(I found your photo upside down

I never kissed a girl so long,

So long, so lovely or so wrong)

Life is what kills you in the end

And I can cry

But you won't be there to be sorry

You were made of life

Forever we did not exist

We woke and for a second kissed.

And on that note, I'm going to go watch Harry Potter movies while waving my Snape wand...and crying into a cold cup of coffee.