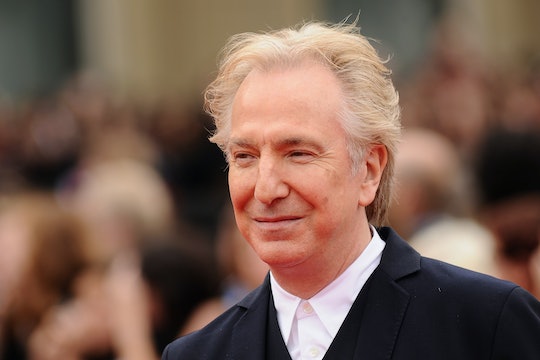 Today, giving us less than a week to stop reeling from the loss of David Bowie, the Universe took another of our most beloved Englishmen. Thursday morning, his family confirmed that actor Alan Rickman died at 69 after a battle with cancer. Rickman's career spanned stage, screen, and decades. While audiences remember him largely as portraying some of the greatest villains in cinematic history, he is remembered by his friends and colleagues for his wit, kindness, warmth, and humility.

Rickman has been one of my favorite actors since I was eight. While he was often typecast as baddies, he played a broad range of characters, bringing depth, nuance, and humor to every role he ever took on. Even if a movie or play was not great, after you'd see anything he was in, you'd feel the need to emphatically tell someone "...but Alan Rickman was awesome." Because he inevitably was; he was consistently superb. In fact, I don't think there has been a Rickman performance that one could ever look at and say, "Meh. He was OK."

In memorializing his life, I've no doubt writers, journalists, and critics will all focus on his tremendous talent and contributions to the arts. So I would like to take a different approach. I come to praise Alan Rickman: Unlikely Sex Symbol of Our Time. Traditionally stunning or even handsome? No. But Rickman radiated sex appeal. I'm not alone in this assessment. Total Film magazine put him on their sexiest actor list less than three years ago. Countless women and men in my Facebook and Twitter feeds this morning are bemoaning the loss of their "celebrity husband/boyfriend/booty call." Maybe it was his nose (I'm a sucker for big noses). His artfully disheveled hair. His talent. His overall charisma. Or the fact that he was obviously a wonderful human being. (His being a feminist certainly didn't hurt.)

And so, as a tribute to the late great Rickman, let us delve into his most swoon-worthy roles A) because I sort of can't handle how sad I am and I want to do something light-hearted; and B) because I never don't want to be delving into Alan Rickman's sexiness, and the only good thing about this day is that I have a valid excuse to do so.