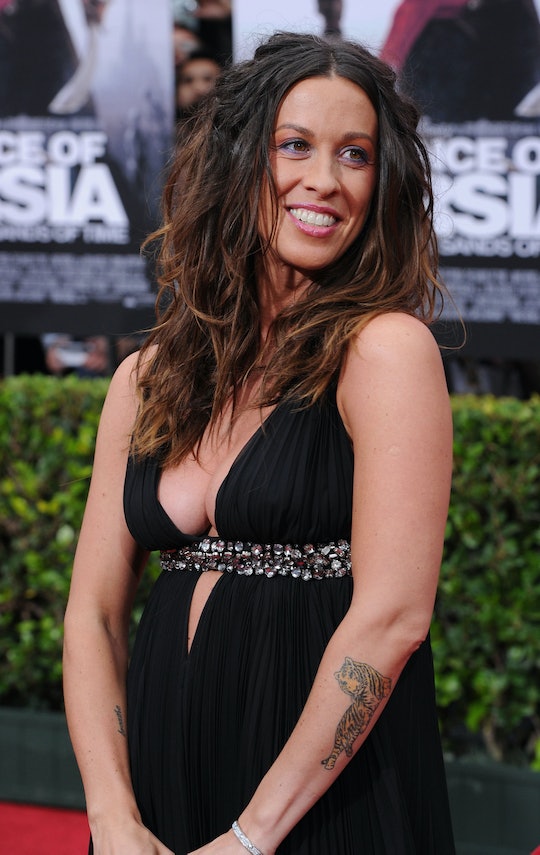 In case you missed the exciting news, Alanis Morissette gave birth to her third child, a boy, on Aug. 8. Morissette is ecstatic about her new addition, to say the least, and on Saturday she shared an adorable photo of her little guy nursing. And while Alanis Morissette's breastfeeding photo is sweet, it also offers an important reminder to new and experienced parents.

In case you missed the happy news, Morissette welcomed her son in early August after announcing her pregnancy in March. "He’s here," she captioned an Aug. 12 photo of her son, who she named Winter Mercy Morissette-Treadway. "#mywholelifeidreamedoflovingyouthree." Aww.

Now that Winter is finally here, Morissette is getting back into the swing of having a newborn in the house, which includes breastfeeding. "Snug as a bug in a milky rug," she captioned a dreamy shot of Winter feeding.

If you take a closer look at the caption, you'll notice Morissette paid homage to World Breastfeeding Month with a hashtag, while also recognizing that breastfeeding is "#notalwayseasypeasy."

Morissette's message might seem simple or obvious to some, but it can't be said enough that breastfeeding is difficult for many parents. There's no shame in not being able to breastfeed right away or at all. It's OK to struggle and to feel defeated — no journey is the same.

After Morissette shared her post, many parents chimed in to share their own experiences and words of encouragement.

"Nope - definitely not always easy, but always worth it," one person commented.

"The best piece of advice I got when I struggled to breastfeed initially was 'it’s the most natural thing in the world but it doesn’t always come naturally to everyone!'" another fan wrote. "I stopped beating myself up, relaxed and it got easier but it’s still the hardest thing I’ve ever done. I fed my first daughter for 2 and a half years and my second daughter is still going strong at 16 months."

A fan said: "Not easy peasy at all!! Good job momma you’re doing a wonderful job! Keep you the hard work."

This isn't the first time Morissette has drawn attention to breastfeeding. Back in 2012, for instance, she vowed to breastfeed her first son, Ever, for as long as he wanted. "Some kids naturally stop at two, some stop at a couple of years later, it's up to the child," she explained, according to the Daily Mail. "I will stop when he says it's time to stop."

Morissette also shares plenty of breastfeeding photos to social media, like in August 2018 when she posted a throwback snap of herself feeding her then newborn daughter, Onyx Solace.

Opening up about parenting seems to come naturally to the singer, as there seemingly isn't a topic that's off-limits for her, like when she discussed her difficulties getting pregnant again.

“I chased and prayed for pregnancy and learned so much about my body and biochemistry and immunity and gynecology through the process,” Morissette told Self.

She continued, “It was a torturous learning and loss-filled and persevering process … I chased my health from multiple angles — [including, among other things] extensive consistent blood work monitoring to trauma recovery work to multiple doctor and midwife appointments to many tests and surgeries and investigations, things shifted.”

Bravo to Morissette for always keeping it real, whether it comes to breastfeeding or fertility issues. As the singer noted, these issues topics aren't always easy to tackle.

More Like This
Can You Burp A Baby Too Hard? A Pediatrician Shares Tips For Gassy Tummies
When It’s Safe To Bring Your Newborn To A Restaurant, According To A Pediatrician
The Best Toys For 3-Month-Olds
Is It Good For Babies To Be Exposed To Germs? It’s Complicated