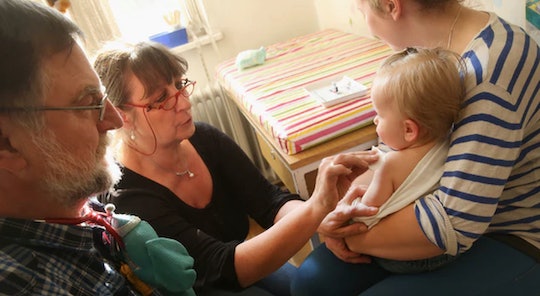 The subject of vaccines continues to be a hot bed of controversy among parents. While many believe that vaccinations are the best way to protect their children from infection and disease, some parents continue to subscribe to the debunked theory that vaccines have been linked to Autism Spectrum Disorder. Perhaps a positive vaccination success story would help soothe these parents' worries — Alaska's vaccination program has recently wiped out the Hepatitis A virus, and it's a step in the right direction.

According to the World Health Organization:

Hepatitis A is a liver disease caused by the hepatitis A virus. The virus is primarily spread when an uninfected (and unvaccinated) person ingests food or water that is contaminated with the feces of an infected person.

Children do not generally show any symptoms of having contracted Hepatitis A, according to the Centers for Disease Control and Prevention, but 80 percent of adults with the virus could experience jaundice, abdominal pain, diarrhea, pale stools, and dark urine.

While Hepatitis A tends to breed in developing countries with poor sanitation, the native people of the state of Alaska have struggled to get ahead of the short-term (but intense) virus. Alaska introduced a comprehensive Hep-A vaccination program in the '90s that was eventually introduced as a pre-requisite for school attendance in 2001. And the results were astounding.

In the 40 years before Alaska introduced the Hep-A vaccine, the state was struggling with epidemics every 10 to 15 years. A disproportionate number of Alaskan native children contracted the liver infection. In 1995, Alaska introduced a universal Hep-A vaccination program for children between the ages of 2 to 14 years. Two years later, the program expanded to include 18-year-olds as well; by 2006, every child in Alaska between the ages of 1 to 18 was included in the universal vaccination program.

According to the World Hepatitis Alliance, approximately 60 people out of every 100,000 in the state of Alaska contracted Hep-A each year between 1972-1995. After the introduction of the vaccine program, that number dropped to 0.35 per 100,000 people. That's a whopping 98 percent drop.

Before Alaskan children were vaccinated against Hep-A, most of the reported instances of the virus reported in the United States were associated with that state. However, since 2008 the majority of Hep-A cases in America are now attributed to unvaccinated people traveling outside the country.

If ever there was a case to be made in favor of vaccinating children, the state of Alaska's success story in eradicating the painful Hep-A virus is one of the best examples around. Irrefutable scientific evidence that vaccines can and do work.