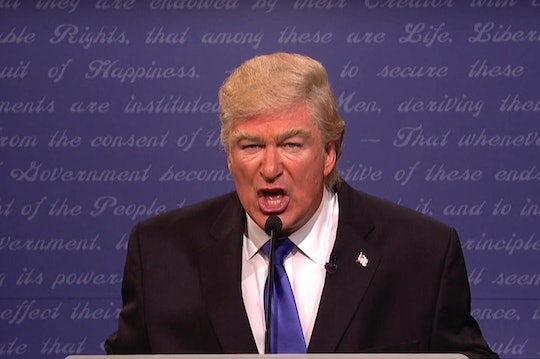 Just because the election is over, it doesn't mean that Saturday Night Live is done with Alec Baldwin playing President-elect Trump. But given that the show has never shied away from politics, there will probably always be some Trump-heavy sketches, and Alec Baldwin's return as Trump on SNL in the cold open was scary accurate. Saturday night on SNL, viewers were given a glimpse into Trump's meetings with his closest advisers and supporters, now that he is president-elect. But as he met with an army general, Mike Pence, a voter from a Midwest mining town, and his campaign manager, Baldwin's Trump did a complete flip-flop on all of the things that were promised during the campaign.

The army general met with Trump in the SNL cold open, during which the general applauded him on his secret plans to take down Isis. Then, as soon as the general left, Trump tried to ask Siri was ISIS is and how to defeat them. The only problem (other than a president-elect asking his smartphone who ISIS is) was that he was talking to his Blackberry.

When Pence met with him to talk about his plans to deport illegal immigrants and how he was going to go about it, and that it would be a difficult road ahead of them, Trump was quick to go back on the plan, saying, to "scrap it" and "so maybe let's not do it."

Baldwin's Trump in the SNL cold open also said that instead of following through with his plan to repeal Obamacare, it would be easier to keep it around and told Pence, "Let's just keep it," like it's something so small and trivial that it's totally acceptable to change your mind about it with a simple shrug.

The interaction with his Kellyanne Conway, his campaign manager, was also painfully on point, as Kate McKinnon played an obvious Clinton supporter and wished aloud for a time machine to go back ad try to change the election results. Then, when she was brushing her shoulders and Trump asked if something was on her shoulders, she replied, "Yes—all of this." Which, at this point, is honestly what much of Trump's staff is thinking.

SNL's cold open with Baldwin's Trump Saturday night was super accurate, and said pretty much what a lot of people may be thinking at this point, but SNL is there to give viewers just that.