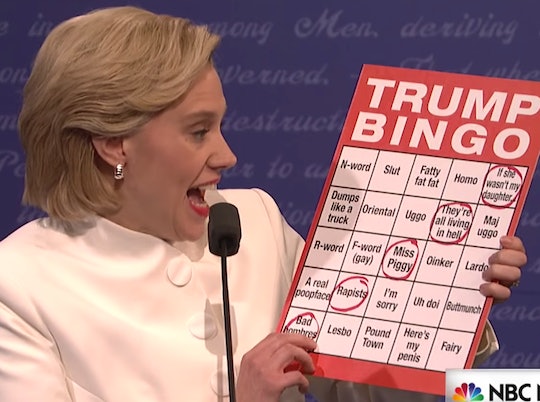 In Saturday Night Live's rendition of the third (and final!) presidential debate, Alec Baldwin's Donald Trump gets to the crux of why he now purports to believe that the entire planet, especially that nefarious media, is working in cahoots to take down his presidential bid. "All the newscasters are making me look so bad — by taking all the things I say, and all the things I do, and putting them on TV," he lamented. And throughout it's all-too-accurate cold open, SNL's final debate skit truly barely strayed from reality as it broadcast its take on everything from Trump's refusal to pledge to accept the outcome of the election to Clinton's hesitance to answer any questions about her use of a private email server, with Kate McKinnon's portrayal of her going as far as to call the moderator's attempt to get her to do so "cute."

With little more than two weeks to go until Election Day, SNL seems pretty darn convinced that the United States is about to swear in its first woman president. And that the previous debates — during which the real-life Trump said that paying no federal income tax "makes me smart" and creepily stalked his opponent around the stage — propelled Hillary Clinton on this path and totally wore the American people out.

"Tonight is going to be a lot like the third Lord of the Rings movie," Fox News moderator Chris Wallace, played by Tom Hanks, said at the outset. "You don't really want to watch, but, hey, you've come this far."

And just as their real-life counterparts did Wednesday night, Baldwin and McKinnon really delivered. And Baldwin, especially, stuck to the script of what Trump actually said last week, calling Clinton a "nasty woman," unabashedly perpetuating the wildly inaccurate myth that late-term abortion is a procedure in which a baby is ripped from a woman right before birth, and calling some Latino immigrants "bad hombres." Each was a figurative victory for the actual Hillary Clinton, but the last was a literal one for McKinnon's portrayal of her.

"Bingo! I got bingo!" she yelps when Baldwin utters the racist phrase, and whips out a BINGO card crammed with outrageous admissions and insults Trump has flung at others throughout the campaign cycle. "I have 'bad hombres,' 'rapists,' 'Miss Piggy,' 'they're all living in hell,' and 'if she wasn't my daughter'!"

Even one of the most outlandish moments of the night was rooted in pure fact. At one point, Baldwin's Trump insists that "no one has more respect for women than I do." It's an assertion that the man who's been caught on tape crudely bragging about allegedly making unwanted sexual advances toward women and who's been accused more than 10 times of doing just that, actually made at his final matchup with Clinton.

On Wednesday, the debate audience in Las Vegas laughed a baffled laugh that he would have the audacity to say such a thing. On SNL, the entire planet did.

SNL also poked fun at Clinton's rabid enthusiasm about talking about her 30 years of experience in public office, and her her pivot when it comes to talking about her email scandal ("Thank you for bringing up my emails, Chris, and I'm very happy to clarify what was in some of them — what, Carol?" McKinnon's Clinton says in response to a question about it. "I'm sorry, I thought I heard my friend Carol.")

The overall impression on SNL, though, as well as in the polls, is that Clinton is just biding her time until she can eviscerate "sweet little baby Trump" Nov. 8. "He's an F. America, you deserve better than an F," McKinnon's Clinton closes out the skit. "So, on Nov. 8, vote for me, and I promise I will be a stone-cold B."