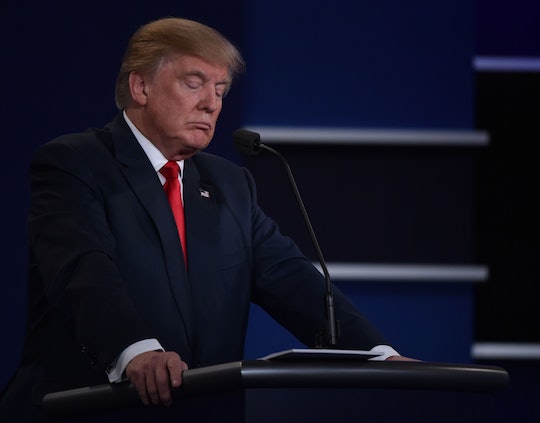 The final general election debate between Democratic candidate Hillary Clinton and GOP candidate Donald Trump on Wednesday night was a real low point in American politics. As Clinton attempted to keep her trademark cool (aided, in part, by her killer white pantsuit), Trump took the low road at every turn. One of his lowest points? When Trump called Hillary a "nasty woman" and proved he clearly has absolutely no respect for women.

It was a low point in a night of low points from Trump, the man who actually said during the final debate, "Nobody respects women more than me" while attacking women who dared to accuse him of sexual misconduct. He interrupted both Clinton and moderator, Fox News anchor Chris Wallace, so frequently it became almost laughable. He refused to say that he would accept the results of the election, saying instead with a gleeful little shrug, "I am going to keep you in suspense," like the outcome of a presidential election is on par with a reality show.

But, for many, one of his lowest moments came when he simply called Clinton a "nasty woman", because it really spoke to his general attitude about women which seems to be, "Behave. Be Beautiful. And Be Quiet."

Clinton was admittedly baiting Trump all evening, which seems to be a distressingly easy thing to do. Clinton was addressing moderator Wallace's question about entitlement reform:

My Social Security contribution will go up, as will Donald’s—assuming he can’t find a way to get out of it.

To which Trump responded by muttering into his microphone:

Such a nasty woman.

If anyone was wondering whether or not Donald Trump respected women at this late stage of the fame, those four little words should end the debate. If people were still wondering how Donald Trump saw women after The Washington Post released the Trump Tape, where Trump can be heard bragging that he can just "grab women by the pussy" because he was such a powerful man, the question has been answered: Trump has no respect for women.