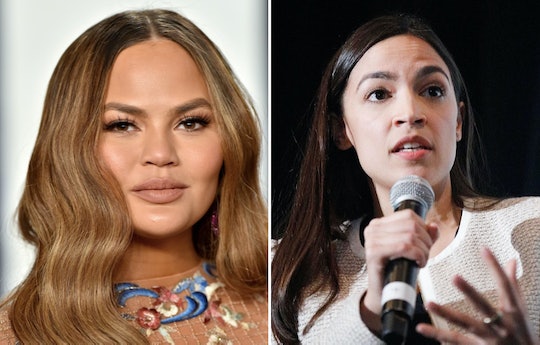 After she addressed the insulting comments Florida Rep. Ted Yoho reportedly made about her earlier this week, New York Rep. Alexandria Ocasio-Cortez delivered a powerful speech on Thursday that left many, including Chrissy Teigen, feeling inspired. In a tweet sharing a video of the congresswoman's speech, the mother of two said she would be thrilled if her 4-year-old daughter Luna "turns out to be half the woman Alexandria is."

"If Luna turns out to be half the woman Alexandria is, I will have won," Teigen, who also shares her 2-year-old son Miles with her husband John Legend, tweeted alongisde a video of Ocasio-Cortez's speech. "I can’t believe we are lucky enough to have her in that room."

On Thursday, the congresswoman spoke about a confrontation she had with Yoho earlier in the week on the steps of Capitol Hill. According to The Hill, Yoho reportedly called Ocasio-Cortez "disgusting" and told her she was "out of [her] freaking mind" because she suggested poverty and unemployment rates exacerbated by the pandemic were linked to increased crime rates in New York City. The Hill reported that after Ocasio-Cortez told Yoho his comments were "rude," the Florida congressman was then overheard allegedly saying to himself "F*cking b*tch" after they parted ways.

On July 21, Ocasio-Cortez confirmed the altercation herself on Twitter. "I never spoke to Rep. Yoho before he decided to accost me on the steps of the nation’s Capitol yesterday. Believe it or not, I usually get along fine w/ my GOP colleagues. We know how to check our legislative sparring at the committee door. But hey, 'b*tches' get stuff done."

A day later, according to NBC News, Yoho apologized for the "abrupt manner" of their conversation, but denied using the profane language The Hill reported he had used, noting that he has a wife of 45 years and two daughters, which makes him "very cognizant of my language." He added, "The offensive name-calling words attributed to me by the press were never spoken to my colleagues and if they were construed that way, I apologize for their misunderstanding."

The congresswoman went on to note that she is also "someone’s daughter." "My father, thankfully, is not alive to see how Mr. Yoho treated his daughter," she said during her speech. "My mother got to see Mr. Yoho’s disrespect on the floor of this House toward me on television," Ocasio-Cortez added. "And I am here because I have to show my parents that I am their daughter and they did not raise me to accept abuse from men."

When Ocasio-Cortez pointed out that Yoho "in using that language, in front of the press, he gave permission to use that language against his wife, his daughters," it was a powerful reminder that people cannot simply invoke their relation to a woman when trying to excuse bad behavior.

Teigen certainly wasn't the only one who was moved by Ocasio-Cortez's speech. One woman commented on Teigen's twee that while she doesn't not "always agree" with Ocasio-Cortez's policies, her speech was "spot on." "No woman should take that kind of language from a man at work or home!" she commented.

Another said that thought Ocasio-Cortez's comment that "having a daughter does not make a man decent" was "beautifully said" and wanted it "written in stone."

Another agreed with Teigen's take on Ocasio-Cortez's, writing: "Thought the same thing about my kids watching this. What a powerful woman. @AOC's mom must be bursting with pride."

More Like This
Chrissy Teigen Says She’s Come To Understand She Had An Abortion To Save Her Life
Lifelong Teacher Dr. Jill Biden Loves Watching Abbott Elementary Too
George Clooney Really Regrets Having His Twins Learn A Language He Doesn't Speak
Serena Williams Shares How Her Daughter Comforted Her After Losing A Big Match