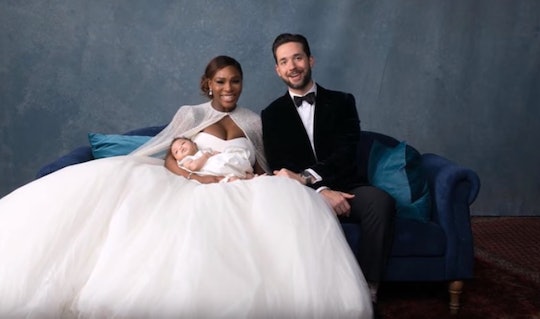 I have no idea what it's like growing up famous, but I would guess that it's weird, complicated, stressful, and charmed all the same. I'd also imagine that a celebrity childhood has a certain level of fantasy at play, shielding kids from commonality. That's why, when Reddit co-founder Alexis Ohanian addressed Olympia growing up in the spotlight in a recent interview with Vogue, I couldn't help but find his words honest and refreshing.

In the cover story for Vogue's February issue, Ohanian and tennis champion Serena Williams talked about what type of life they want for their daughter, Alexis Olympia Ohanian Jr. (who goes by Olympia). More broadly, the newlywed couple touched on what it would mean for Olympia to be raised in the spotlight, with Ohanian telling the magazine,

She’s obviously going to have a very special life, but there are enough cautionary tales about kids who grow up in the spotlight. How do you make your kid live in reality when your own reality is so . . . unreal? This kid is going to have more Instagram followers than me in about three weeks.

Ohanian's not kidding with that last point, by the way: Olympia already has more than 209,000 followers on her Instagram account, as of Wednesday afternoon. By contrast, her father only has more than 245,000 followers. Serena Williams, though, has slayed Instagram with more than 7.4 million followers, so Ohanian and Olympia have a lot of catching up to do.

Instagram shade aside, Ohanian makes a valid — and necessary — point: There's considerable distance between the lives led by famous, wealthy people and non-famous, non-wealthy folks. It's not that Olympia won't face her own hardships as a famous kid; research has shown growing up in the spotlight can have damaging effects on a child's self-esteem, and can lead to stress, anxiety, and depression, according to USA Today. But she won't experience life the same way, say, my son will.

Of course, I have no judgments about that fact, which is why I appreciate Ohanian's honesty. It seems to me that he understands a normal life is not in the cards for Olympia, but that doesn't mean he and Williams won't raise their daughter to be grounded.

Quite the opposite seems true: In the same Vogue interview, Williams said that she wants Olympia to have an ordinary childhood as much as possible. She told the magazine,

I would hate her to have to deal with comparisons or expectations. It’s so much work, and I’ve given up so much. I don’t regret it, but it’s like Sliding Doors: Go through a different door and lead a different life. I’d like her to have a normal life. I didn’t have that.

I'm also not surprised by the couple's honesty and lack of pretension. After all, Williams is the same tennis star who has turned to social media for parenting and breastfeeding advice, and chose to withdraw from the Australian Open this year because she knew her body needed more time to heal and strengthen.

Alexis Olympia Ohanian Jr. will no doubt have an interesting and surreal life. Yet, what's wonderful — and important — is that her dad recognized that she will grow up in this world in a way that's removed from the average, every day life. Alexis Ohanian has a certain level of privilege that will cause his daughter to view the world far differently from other kids her age.

But Ohanian's acknowledgement of his advantages — and, by extension, his daughter's own — would suggest that the powerhouse couple plan to raise Olympia so that they can close the very real gap between having "a very special life" and having a normal one.