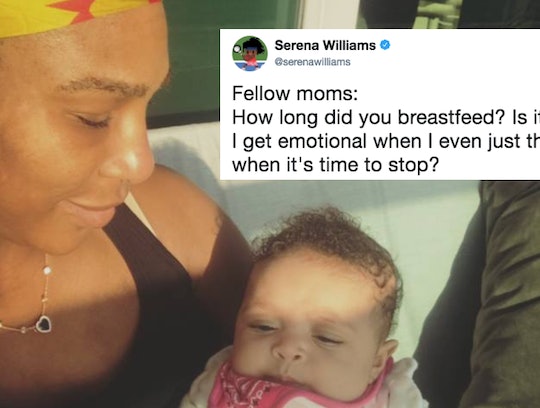 Breastfeeding can be an epic bonding experience between a mom and a baby, or a major pain in the butt — and, frequently, it's both. And new mom and tennis star Serena Williams is clearly enjoying nursing her 3-month-old daughter, so much so that she does not want to stop anytime soon. So, in a move that has become typical of the dominant athlete, she turned to social media for information and advice on that front. And when Serena Williams asked moms how long they breastfed on Twitter, many were right there to let her know how they'd navigated nursing and to offer some virtual support.

On Wednesday, Williams tweeted a sweet pic of herself cradling little Alexis Olympia Ohanian, whom she shares with her husband, Reddit co-founder Alexis Ohanian. In the pic, she appears content and serene as she looks lovingly at her baby, but the accompanying question reveals she actually has a lot on her mind. Addressing her "fellow moms," Williams wrote, "How long did you breastfeed? Is it weird that I get emotional when I even just think about when it's time to stop?"

The American Academy of Pediatrics recommends that babies live on breast milk exclusively for their first six months, and then consume it in conjunction with complementary foods for at least six more months after that. Every situation is different, though, meaning that some moms nurse for much longer than that and others for a significantly shorter period, if at all.

Williams doesn't indicate when she plans to stop breastfeeding in her tweet, but does clearly communicate that she knows she won't be doing this forever. Either way, lots of other moms had a lot to say on the subject, coming through with info that could prove invaluable to any breastfeeding mom.

Even though it's not immediately obvious whether Williams asked this question because she's thinking about weaning in the near future or not, she certainly has made a habit of soliciting advice for her pressing pregnancy and parenting needs. When she was still pregnant for example, Twitter came to her aid when she asked for recommendations on how to best turn over at night with her bump, and she also picked up some tidbits in August when she started a Reddit thread called "When did you pack your hospital bag?"

Still, one commenter theorized that Williams may be mulling over the end of breastfeeding because she has to get back to work — which, for her, means racking up win after win on the tennis court. Who knows how Williams plans to manage doing that and feeding her child, but there could be some truth to the hypothesis. That's because Australian Open director Craig Tiley told reporters Wednesday that Williams had entered to compete in the January tournament.

Williams' fans would absolutely love that, and making that particular competition her big return to the sport after giving birth would have special significance as well. Williams famously won the tournament last year when she was pregnant (although the public did not know that at the time) and she even recently shared that her daughter initials (A.O.) are a tribute to the tournament.

Whatever's next for Williams and her baby daughter, it's great to know that she is having such a positive experience breastfeeding. And it's been so wonderful for fans to witness her journey with motherhood so far. It's only going to get better, because before long, little Alexis will likely be watching her mom kill it on the tennis court — and she may even pick up a racket herself one day.