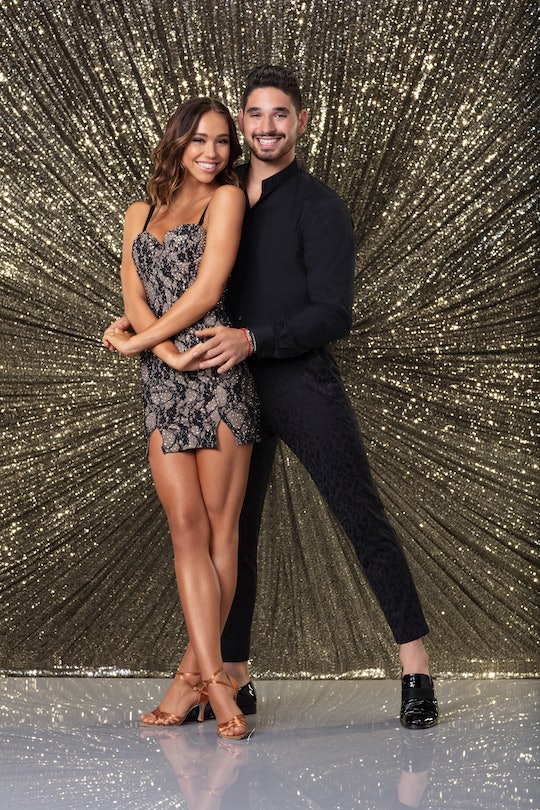 With everything that's happened on Dancing With the Stars already, it's hard to believe it's only a few weeks in. Dancing aside, I also come for the character arcs; the revelations that show me who the contestants are as people. Case in point: Alexis Ren opened up about her mom's battle with cancer on DWTS and Twitter is so supportive. Rightfully so. As someone who's lost a parent to cancer, I — and many others — feel her pain. Luckily pro partner, Alan Bersten, heard her pain and helped her pour it into a beautiful routine.

For those who can't remember who Alexis is, she's a 21-year-old Instagram star with 12.8 million followers and she spoke out about the tragic loss of her mother on Monday night's episode. Though she made a name for herself as a model and social media influencer, she's also spoken about how the loss of her mom contributed to the person Alexis is today. Her mom, a health nutrition expert died in 2013 from breast cancer. And Alexis has said there's one compliment you can give her that means the world: tell her she's a lot like her mom. According to Alexis, it's because her mom was a "shining ball of light," and aww.

Anyone who loses a parent is forever changed. With two sisters and a younger brother — all of whom were homeschooled and spent a lot of time with their mom — Alexis claims the close bond wasn't as strong with her father because he worked a lot throughout her childhood. All of this doesn't come without a price and Alexis hasn't been shy opening up about how the loss of her mother changed her. In a series of Tweets that vaguely referenced health issues, it wasn't known at the time Alexis's battle with disordered eating was her way of coping with the loss of her mom. She urged others (specifically young girls who may look up to her and those like her) not to play the comparison game because it "creates the anxiety and self-hatred." Wise words from a girl in mourning, trying to find her way.

Once Alexis turned 18, she took her pain and channeled it by going to Australia to model. Grief is different for everyone but it seems like Alexis found her calling (aside from dance, am I right?). Sharing this story as her most memorable year only makes DTWS fans root for Alexis that much more because it's so relatable. The crushing weight of losing someone you love and are closest to could stop you from pursuing your dreams. But Alexis took all of that and used it to propel herself forward in her mother's honor. It takes courage to open up to anyone — let alone the world on national TV — which is why Twitter is so supportive right now. BTW, thanks, internet.

Serious question: If you didn't cry watching, are you even human? I'm out of tissues.

I couldn't say it better than literally all of Twitter.

Seeing as dancer Maddie Ziegler promised host Tom Bergeron she'll be part of Alexis and Alan's next dance if they're not eliminated, I'm thinking fans will pick up their phones and vote. Or maybe, call their moms in honor of Alexis's story. Yeah, probably that.

See? The internet isn't all bad. If one good thing comes from Monday's performances, let it be that all DWTS contestants have way more to their stories than what we see. They have the same joys and pains and experience the same gains and losses. Because that's life. As for Alexis, no matter what the results may bring in this competition, her mother would be so so proud.