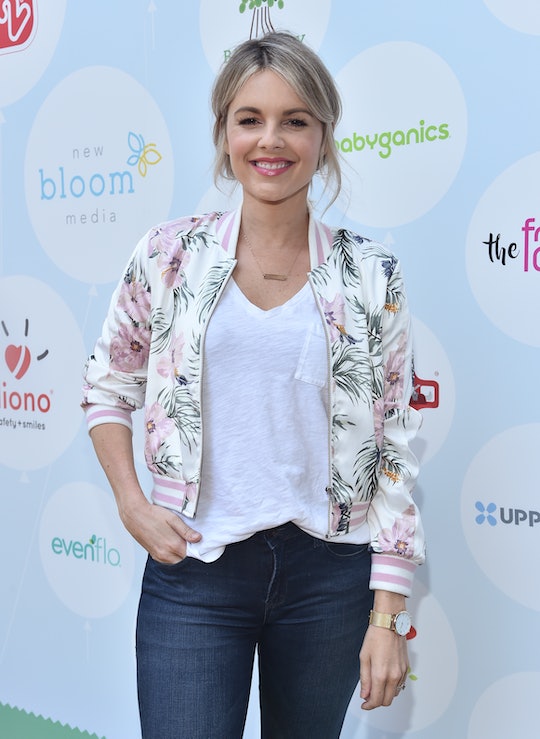 Exactly one week ago, former Bachelorette star Ali Fedotowsky-Manno gave birth to her second child, a boy named Riley Manno. And on Thursday, Fedotowsky took to her blog, Ali Luvs, to reflect on Riley's first seven days of life. As one might expect, Fedotowsky has already learned *a lot* about being a parent to two young kids. Although there a lot of points worth mentioning, this particular lesson Ali Fedotowsky learned following the birth of Riley is especially important. If you're a parent to young kids, there's a good chance you'll want to pay attention to this one.

Fedotowsky is a fun celebrity mom to follow because she frequently shares updates about her life. Want proof? Look no further than Riley's first-week photo uploaded to Instagram right on schedule. "We love this little dude! Riley is officially 1 week old! Happy 1st week of life little guy!!!," Fedotowsky captioned an adorable shot of Riley, according to Instagram. "... P.S. Molly refused to be in this photo. #Toddlers." Too cute.

Adorableness aside (seriously, Riley is one photogenic little nugget), Fedotowsky also directed her followers to a blog post elaborating on the baby's first week of life. Fedotowsky touched on how her daughter, Molly, and her husband, Kevin Manno, are adjusting to the new addition to the family's household.

One of the first things that sticks out to me about Fedotowsky's post is her keen ability to reflect. For example, Fedotowsky revealed that she happily accepted help post-delivery this time around. If you're a fan of Fedotowsky, you probably already know that she insisted on watching Molly alone for an entire month — a choice that led her to have an emotional breakdown. The good news is Fedotowsky now knows it's OK to accept help.

"One night this week Riley woke up every 1.5 hours and then Molly decided to get up at 5 AM," Fedotowsky penned, according to Ali Luvs. "That was a pretty rough night/morning. Luckily, we had the grandmas with us this past week. Both my mom and Kevin’s mom were here, so it definitely made things a lot easier on us."

Props to Fedotowsky for taking advantage of the grandmas. When you have a friend or relative who offers to help out, there's no shame in taking them up on it.

But the most notable lesson Fedotowsky has learned thus far is that she needs to slow down. Fedotowsky realized this when she attempted to complete a long photoshoot with her friend, Ashley. Apparently, Fedotowsky was able to get through all day photoshoots in the past with no problem — something she can no longer do with two kids in tow. Fedotowsky explained, according to Ali Luvs:

I shoot photos with Ashley all the time since she shoots most of my blog content, so I’m no stranger to long shoot days with her. But trying to get in a bunch of family photos and newborn photos (and sneak in some blog content) in one day was just way too much for me 5 days after giving birth. My body totally gave out. We only shot photos for 4-5 hours or so (with breaks to nurse Riley and eat lunch) and we normally shoot for a lot longer than that, but that 5 hours was a lot for my body to take. And Molly just wasn’t having it, throwing multiple toddler tantrums, and poor little Riley didn’t get the sleep that he probably needed since we kept picking him up for photos.

Sheesh, talk about a stressful day.

Moving forward, Fedotowsky knows she'll have to make some readjustments in her career and personal life to ensure things run smoothly. Fedotowsky continued in the post:

So what I’m trying to say is that it was kind of a wake up call for me that I’m not gonna be able to push myself as hard as I used to. Things are going to have to change now that we have two kids under two. Life will have to slow down and my work commitments will have to slow down. I’m just trying to figure it all out day by day. And yesterday was a lesson that I needed to learn and I know there will be many more lessons to learn in the weeks, months and years ahead.

It goes without saying that Fedotowsky's renewed commitment to self-care is admirable. It takes a lot to admit that your body is tired, or that you simply can't do certain tasks anymore. And It's important that parents recognize that accepting change isn't symbolic of failure. Fedotowsky, for instance, isn't any less accomplished or successful now that her photoshoots are shorter. In fact, I bet Fedotowsky's content will be even more fulfilling and engaging given her recent changes. People tend do better work when they're rested and content.

So, here's to hoping that all of the stressed parents out there take Fedotowsky's lesson to heart. No one deserves to feel overrun or overworked, and no person should feel shame about readjusting their normal for health reasons.