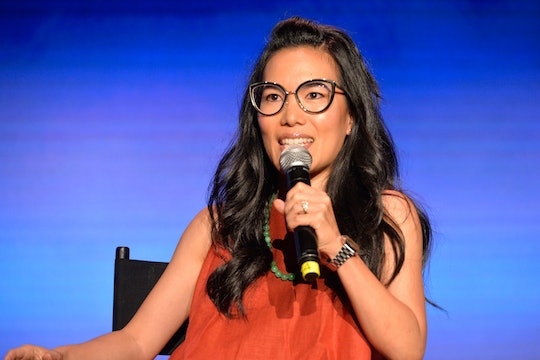 Ali Wong Gets Candid About How, Yup, All Working Moms Need Help

I think it's probably safe to say that Ali Wong enjoys her career. The actress and comedian has been enjoying something of a renaissance moment recently thanks in no small part to her successful stand-up specials on Netflix, Baby Cobra and Hard Knock Wife, where she riffs on motherhood and marriage. But just because she finds her work fulfilling doesn't mean she has an easy time juggling all of the parts of her life. In a recent interview for the November issue of Health, Wong admitted needing help as a working mom. Because there's no shame in actually reaching out to your village when you're raising that child.

The Always Be My Maybe star is a mother of two little girls, 4-year-old Mari and a second daughter she gave birth to in December 2017 (she hasn't shared her name and also she and her husband, Justin Hakuta, are careful not to share photos of their faces on social media). Over the past few years, Wong has been incredibly, beautifully open about her experiences as a mom; in fact, she's pretty much made a living out of it.

Wong's two popular stand-up specials — Baby Cobra and Hard Knock Wife — focus on pregnancy and motherhood. In fact, she was pregnant when she filmed both. In Hard Knock Wife, Wong addressed the question of managing work/life balance with her kids, a question she apparently gets asked constantly (despite the fact that men are never asked this, an issue she addressed in 2016, and yet people still ask her about it). Her response? "I have a nanny."

In Wong's interview with Health, she elaborated about the importance of reaching out for help as a working mom and why she has made it a rule to be candid about it. "It’s so unfair," Wong told Health. "Especially when some of these moms look so hot. J.Lo had twins; she’s 50 now, what the f---?! It’s like, 'B----, spill the beans! Tell us the secret or let us know it’s not possible without resources.'

Wong added in the same interview that her friends help her stay "grounded." She explained, "They are real people who are working 60-hour weeks — they are public defenders, doctors, graphic designers. You get the picture. They work their a**es off. So I want to be honest about how I am able to do everything I do."

Everyone take a moment to give Ali Wong the standing ovation she deserves, because that's exactly right. Wong is a busy woman these days, bringing her family with her on her Milk & Money comedy tour and getting ready to launch her book of essays on Oct. 15 called Dear Girls, according to The New York Times. It's a lot to take on, so of course she needs some help. Don't we all?

Wong is standing up for all working moms by openly admitting she wouldn't be able to manage without help. In fact, a Forbes survey from May 2019 found that a full 90% of working moms found being successful both at work and home challenging, while 50% of moms who left the workforce said they would have stayed on if their employers offered a little more flexibility.

Not everyone can afford a nanny, of course, but that doesn't mean we can't reach out for help in other ways. Family, friends, employers, and of course, spouses should be willing to lend a hand. Because a woman should never have to choose between career or family fulfillment. Just ask Ali Wong.