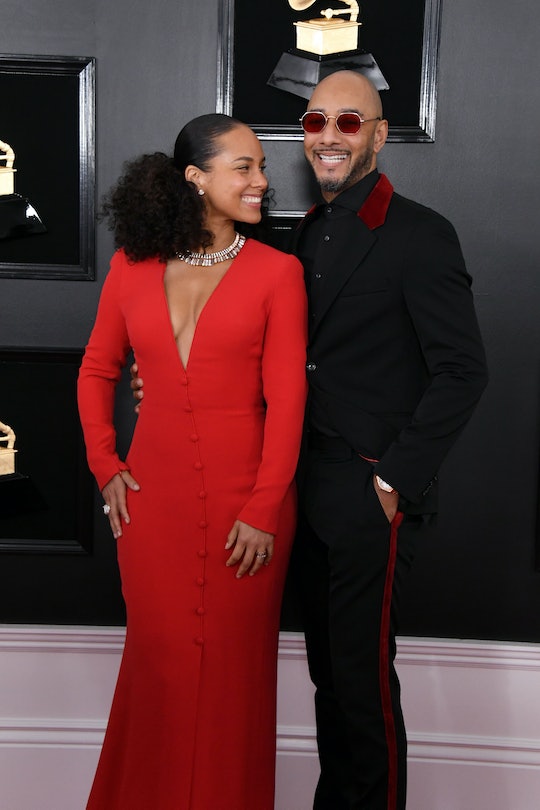 One of the most anticipated moments of the 2019 Grammys is probably the first time someone gets away with dropping an F-bomb during their acceptance speech. What can I say? We're all immature pre-teens at heart. But viewers were also looking forward to seeing Alicia Keys and Swizz Beatz make their entrance since Keys is this year's host. And Alicia Keys and Swizz on the Grammys red carpet were the definition of #CoupleGoals.

Before the Grammys, some fans may not have seen Keys and Swizz together all that much, so their appearance on the Grammys red carpet is kind of a big deal. It was expected that this year's host would show up with her husband on her arm, but I don't know if everyone expected to see them as the new Beyoncé and JAY-Z in the making. OK, that might be a little strong, but they are one of those couples who scream music royalty and their look together on the Grammys red carpet is a testament to that.

Swizz, who is a rapper and music producer, has known Keys since they were teenagers and whenever you see them in public, they look like they should have been together all along instead of finally getting together as adults.

One of the secrets to their success as a couple to look at for an example likely has to do with their co-parenting success with Swizz's ex-wife. In October, Keys opened up to Good Morning America about their blended family and how they all work together with Swizz, his ex-wife, their son, and the two small children he shares with Keys.

"We love each other. I mean, we hang out with each other. We go to dinner together," Keys said at the time. "We're doing Thanksgiving, we're doing the holidays."

Keys added that part of what helped get over the initial hump was agreeing that as parents, they all had to start to work things out for the sake of their children.

"Just allowing everybody to have a moment to speak. Not interrupting each other," she said, of sitting down with Swizz and his ex-wife, who she now considers family. "Really praying before we started, so that we can create beautiful energy between us... It is a beautiful partnership," she added. "And that is really, really special. I'm very, very proud of that."

Keys and Swizz seemed so comfortable with each other on the Grammys red carpet that you might not even believe they were standing in front of two dozen photographers while they posed and kissed ahead of the show Sunday night. But their chemistry and seriously open communication is part of what makes them such couple goals.

In August, the couple took an epic anniversary vacation and before that, in July, Keys wrote a heartfelt message on Instagram to her husband of eight years.

"Cheers to 8 year my love!!!! WOW! US! This LOVE!!! So amazing!! So infinite! So powerful! So electric!!" she wrote. "It’s been the best 8 years of my LIFE!! I can only imagine the greatness the future holds!! Thank you for showing me what life is, what love is, what dreams are in infinite and endless awe and love!!!"

Like I said, Swizz and Keys are absolutely couples goals and seeing them together on the Grammys red carpet only helped prove that.