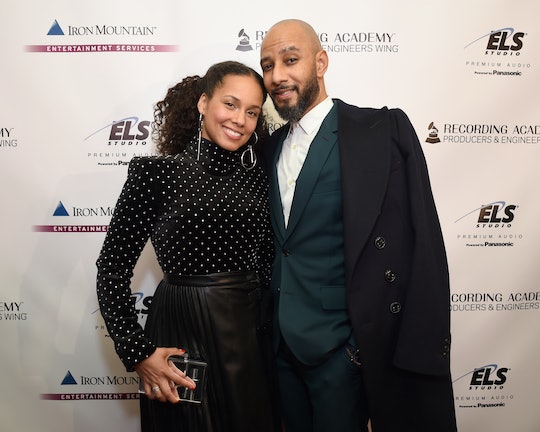 Who Is Alicia Keys' Husband? Swizz Beatz Is Always In Her Corner

I'm not as much of an awards show person these days, I don't know why. Oh wait, I do know why: The formula is feeling a little stale and trite and tired. Except for the Grammys, of course, and only because this year Alicia Keys is hosting which means it will obviously be amazing. Here's the thing I love about Alicia Keys (other than everything); she is just so much her own person, both in her professional and private life. So much so that people tend not to pry. In fact, do you even know who Alicia Key's husband is at this point? You should, because they're a very awesome couple altogether.

So Alicia Keys is married to influential music producer and rapper Swizz Beatz, according to E! News, whose real name is Kasseem Dean, and has been since 2010. The couple share two little boys, 8-year-old Egypt and 4-year-old son Genesis. But they also are so good at co-parenting Beats' three children from previous relationships that his ex-wife, singer Mashonda Tifrere, wrote a book about their co-parenting style called Blend... and Beats contributed to the 2018 book. Beatz has worked with artists like Jay Z, Kanye, and was even initially recognized as an up-and-coming talent by DMX when he was just a 16-year-old deejay from the Bronx.

In other words, there's an incredible amount of talent in this family. Their sons must be super impressed with them. Or maybe not.

Here's a video of Keys' sons not being impressed with her hosting the Grammys.

Perhaps that's just the way it is in the house of the Grammy award-winning singer and her super talented producer husband. Everyone is just so accustomed to talent being all around that it doesn't feel like a big deal anymore. Which makes sense, considering Keys and Beatz have actually known each other since they were teenagers... although it certainly wasn't love at first sight for Keys.

The singer told The Daily Mail in 2012 that love took awhile to bloom for her:

We were both in the same industry. We first met when we were something like 16 — a high school friend of his ended up being managed by the same people as me. He and I used to hang out and say things like, 'Maybe we'll work together one day.' It's cute that we knew each other when we were 16 but it was not an instant connection. It was a very slow burn, but it does still burn and it's beautiful.

Cosmopolitan reports that eventually the couple went to Egypt to make music together and... well. The rest is history. The made music, and Egypt.

As for Beatz, he is always in Keys' corner and not afraid to speak up for her. Like in 2016 when she decided not to wear makeup to the VMAs and everyone was like How dare she? Beatz shared a video on Instagram where he called people out for being so ridiculous, as Billboard notes, "sitting at home mad, because somebody didn’t wear makeup on their face… not your face, but they didn't put makeup on their face, because they just didn't feel like wearing makeup."

Honestly if I never knew another thing about Swizz Beatz; this would be enough.

More Like This
It’s Britney(‘s Birthday), Bitch!
Hilaria Baldwin Posted An "Epic Fail Family Photo" With Her 7 Kids & Husband Alec
An Ode To Kirstie Alley & Her Messy Self
Kirstie Alley’s Kids Remember The Actress As An “Amazing Mother & Grandmother”